Let’s face it. Retirement planning can be a daunting endeavor, and that's why many physicians and other high-income earners wait too long to start seriously thinking about their future. With more than a dozen ways to invest, where should you even begin? Between 401(k) plans, profit-sharing, and various types of IRAs, it’s enough to make your head spin. You’ve also got plenty of considerations to think about, such as which types of retirement accounts you’re even eligible for and which will cater best to your individual financial planning needs.

To help break it down, let's take a look at traditional IRAs so you can get a better idea of how they might fit into your portfolio.

What Is a Traditional IRA?

In a nutshell, traditional IRAs, or individual retirement accounts, are retirement plans that allow for earned (pre-tax) income to grow over time, tax-deferred, until the account owner ostensibly reaches the retirement age. Traditional IRAs are similar in some ways to standard 401(k) accounts. The primary difference is that 401(k) plans are established by an employer, whereas the individual investor sets up their own IRAs.

How Does a Traditional IRA Work?

As stated above, traditional IRAs work similarly to 401(k) accounts. However, in this instance, the funds are managed by individually appointed custodians, such as commercial banks and retail brokerage firms. These custodians then invest the funds according to the account holder’s instructions. The money in the account then grows tax-deferred until age 59 ½, and the account holder can begin making withdrawals at standard income tax rates. If the money is withdrawn before the age of 59 1/2, though, a 10% early withdrawal penalty is levied (though there can be ways to avoid that penalty).

Who Is Eligible for a Traditional IRA?

Though there are no blanket income limits to participate in a traditional IRA, there are limits to the tax-deductibility of individual contributions depending on whether you already have a 401(k) plan through your employer. Those who don’t have an employer 401(k) plan can take advantage of the full deduction regardless of income. However, if you are currently enrolled in a retirement plan at work, caps on your income dictate the deductibility amount allowed with a traditional IRA.

For example, in 2021, participants covered by an employer 401(k) plan who made less than $66,000 single or $105,000 married filing jointly were eligible for full deductibility. In addition, partial deductibility is granted to earners making up to $76,000 single and $125,000 married filing jointly. For these reasons, traditional IRAs are not as popular with physicians and other high-earners.

What Are the Benefits of a Traditional IRA?

Unlike 401(k) plans, you can’t borrow from an IRA, and the account holder will face a 10% penalty for early withdrawal. And though that may not sound like a “benefit” on paper, there are a handful of exceptions—or loopholes, if you will—that allow for penalty-free early withdrawal.

These exceptions include using the money toward a first-time home purchase, college tuition, family planning, unreimbursed medical expenses, medical insurance resulting from unemployment, an IRS levy, disability, or death. Some exceptions, such as buying or building a first home, come with lifetime limits. But since most of the exceptions involve emergency funds or significant life changes, it’s an attractive feature to have built into a retirement account.

Do You Pay Taxes on a Traditional IRA?

As long as you don’t already have a 401(k) plan through work or you make less than the income cap for full deductibility ($66,000 single or $105,000 married filing jointly), contributions to traditional IRAs are fully tax-deductible, and the IRS will not apply income tax to those initial earnings. When the funds are withdrawn during retirement, the account holder pays only their ordinary income tax rate.

In contrast, when stockholders of standard brokerage accounts receive dividends, those dividends are considered taxable income. However, you can own that very same stock with a traditional IRA, and the government can’t touch the money until you begin making withdrawals. So, for example, even if you invest only a few thousand dollars in stock and it eventually becomes worth millions, the IRS can still only collect your regular tax rate as you begin to withdraw the money.

How Do You Open a Traditional IRA?

The good news is that anyone can open a traditional IRA quickly and easily. All you need is your name, address, and Social Security number to open an investment account with an online brokerage firm within minutes. In addition, most brokerages generally don’t charge a fee to open a traditional IRA account, though some may require minimum funds to start a new account. You can always shop around to find a brokerage that best meets your needs and budget.

Online brokerages such as Vanguard, Fidelity, and Charles Schwab are a good start for IRA novices. In addition to being beginner-friendly, they also tend to have lower investments fees than full-service brokerage firms.

Barring any exceptions or penalties, account holders can begin withdrawing traditional IRA funds at the retirement age of 59 1/2 at standard income tax rates.

From ages 59 1/2 to 72, you’re given leeway to withdraw as much or as little money from your traditional IRA as you’d like. After that, however, the IRS mandates Required Minimum Distributions (RMDs) to withdraw a mandatory percentage of your funds starting April 1 the year after you turn 72 and by Dec. 31 of each subsequent passing year (the age limit for RMDs used to be 70½, which still applies to anyone who turned that age on or before December 20, 2019). 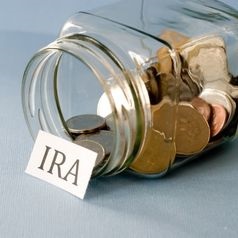 The RMD percentage is generally calculated by dividing the previous year’s balance of the traditional IRA on December 31 by a life expectancy factor dictated by the IRS. So depending on the balance of your IRA, your RMD rate may become higher the older you get. Although an IRA custodian or retirement plan administrator may be able to calculate the RMD, ultimately, it’s the responsibility of the account owner by using online worksheets.

What’s the Difference Between a Traditional IRA and Roth IRA?

Because Roth IRA contributions are post-tax, they can be withdrawn at any time, penalty-free. However, any earnings on those contributions cannot be taken out before age 59 1/2 without being subject to the 10% penalty for early withdrawal. They’re also not subject to RMDs, like traditional IRAs. What this means is if you don’t need the money, it can sit in your account for as long as you want, or you can leave it to heirs.

One of the other primary differences between traditional and Roth IRAs is that—while they both have the same contribution cap of $6,000 annually, or $7,000 for those 50 or older [2021]—there are strict income caps to contribute. And as your Modified Adjusted Gross Income (MAGI) hits a certain level, you may no longer be eligible to contribute to your Roth IRA.

Can You Have Both a Traditional and Roth IRA?

Not only can you have a traditional IRA and a Roth IRA, but you can even contribute to both in the same year. However, standard rules apply, and the combined contribution amounts cannot exceed the annual maximum of $6,000, or $7,000 for those 50 or older.

The reason someone might want to contribute to both a traditional and a Roth IRA is that it provides taxable and tax-free withdrawal options once you hit retirement age. This strategy is generally referred to as tax diversification and could be a good idea for anyone unsure of their financial outlook in retirement.

Which Is Better—a Roth or Traditional IRA?

The ultimate benefits of a Roth IRA vs. a traditional IRA are subjective depending on the individual and what tax bracket they expect to be in when they reach retirement age. In other words, would you prefer to receive your tax benefits now or after you retire?

Since Roth IRA contributions aren't deductible and qualified withdrawals are tax-free, they may ultimately be a better option for those in a relatively low tax bracket at the time of investing. However, if you qualify for the traditional IRA tax deduction and are in a moderate-to-high tax bracket, then the immediate tax savings might be a better tradeoff.

Still not sure if a traditional IRA is right for you? Thankfully, there are countless resources at The White Coat Investor to help you streamline your retirement plans.

Can you contribute to simple IRA (setup with my employer) and also traditional IRA?
2nd question, can I receive tax deduction on the traditional IRA contributions as well?

1. Yes
2. Probably not, but depends on your income.

I am self employed under Ave 50
I set up my own solo 401k through a brokerage firm
I am married filing separately.
Can I can still deduct 6000$ from profit and take a tax deduction? I assume from your post no earning threshold to take a deduction. Does having my own 401k qualify me against being able to take a deduction. If so what is the income threshold for a Roth IRA

Forgot to ask can I also do a spousal ira if my wife make less than 50k but has a work place and can I do a tax deduction if married filing separately
Any income threshold?

No. Do it through the Backdoor.