One of the greatest fears of many investors and retirees is that they will run out of money in retirement. However, there are many strategies available to ensure this doesn't happen to you. By employing one or more of these, you can dramatically decrease those odds.

The greatest financial task of your life is to save up enough money for retirement. However, some people don't quite make it. Or barely make it. Or have bad things happen to them. In spite of that, there are at least eight strategies that will still allow you to avoid running out of money. Choose one or more to apply in your life.

This strategy is employed by many. The 4% “rule” suggests you save up about 25X your annual spending before retiring. However, there is no law that says you can't save up 30X, 33X, 40X, or even 50X. Obviously the more you have in relation to how much you spend, the less likely you are to run out of money.

Here's another great strategy that works very well. Instead of saving more, you can simply spend less. Maybe you were planning to spend $100,000 per year in retirement, but if you can manage to spend just $80,000, you are far less likely to run out of money. You can do this by downsizing or by moving to a lower cost of living area, or you can adjust how often you go out to eat, where you go on vacation, or what you drive in retirement. Lots of options. But you don't actually have to spend less ALL the time. You really only have to spend less when your portfolio is doing poorly. This “variable withdrawal strategy” dramatically increases how much you can spend overall, even if it means sometimes you have to spend a little less. Having spending flexibility in retirement is very valuable.

If you never actually touch your principal, you will never run out of money. That doesn't mean your nest egg, your income, and your spending will be stable or that it will even keep up with inflation, but it does mean you won't run out completely. Yet, this strategy can lead to potential errors. Perhaps the greatest is that you'll end up spending much less than you could have spent—to some people, that just means they worked too long and saved too much. It can also lead someone to inappropriately invest in a high-yielding portfolio. Just because income is higher doesn't mean your total return is higher or even positive. Often it leads people to work and invest differently. They might be more interested in entrepreneurship and both direct and indirect real estate investing, for instance. Nothing wrong with that, but it does require a different set of skills and adds some risk, hassle, and (often) leverage. 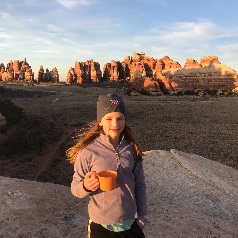 This WCI model is not a fan of me spending “my legacy.” She does like hot chocolate on a cold morning in Canyonlands National Park though.

Many of us would love to leave some money and assets behind to heirs and our favorite charities. However, it's not imperative. Certainly, you don't want to eat Alpo to leave behind a massive legacy. There are several ways to dive into your “legacy money” to support your lifestyle. For instance, if you have a cash value life insurance policy, you could do a partial surrender, borrow against it, (1035) convert it to an immediate annuity, or completely surrender it and then spend that money. Likewise, if you have a paid-off house, you could sell it, take out a mortgage on it, or even buy a reverse mortgage.

I'm not a big fan of either whole life insurance or reverse mortgages (lots of costs and downsides there), but I'm not a big fan of running out of money either. You can sell or borrow against second homes, cars, boats, airplanes, and anything else you were planning to leave to heirs, too. Sometimes you can have (part of) your cake and eat it, too. Let's say you want to leave a bunch of money to charity. But you are also worried about running out of money. You could get a Charitable Remainder Trust. You get a charitable deduction for funding this (which allows you to spend money that would have gone to taxes), you get annuity-like payments for years from it, and the charity gets the “remainder” when you die.

You can take this idea of spending your legacy even further, and many people do. They want their last check to bounce! Why just spend everything you have when you can spend everything you have and everything you can possibly borrow? Remember debts that are only in your name go away at death if your estate has no value. (Yes, I think this is immoral. No, I'm not seriously recommending it; don't send me hate mail. But let's be honest, lots of people do this with everything from credit cards to medical bills to auto loans to IRS debts to student loans.)

Your nest egg lasts a lot longer if you maintain earned income at any level after you retire. While the Internet Retirement Police might argue that you're not actually retired, you're not trying to please them. Maybe this is a little Etsy business or a blog. Maybe it's an encore career. Maybe it's just an Airbnb of your mother-in-law apartment in the basement. Doesn't matter, it all works the same to keep you from running out of money.

I suppose another strategy is to simply work longer before retiring at all. That allows you to make more contributions, gives your investments more time to compound, and makes your Social Security benefit larger.

Delaying Social Security from age 62 to age 70 can dramatically increase your Social Security payments. Most healthy single people should delay for a very simple argument—if you die early, it doesn't matter what you do, and if you die later, you'll be very glad you waited to claim. It will certainly help you avoid running out of money to have a higher guaranteed income. Financially speaking, delaying Social Security is a much better “deal” than the next two options, especially when you consider it is indexed to inflation.

If this is a big concern of yours, you may be working for an organization that offers some sort of pension, such as a government or military employer. But even if you never earned a pension, you can still buy one. These are called Single Premium Immediate Annuities (SPIAs), and you can buy them from many insurance companies. While it is difficult to get an inflation-indexed SPIA these days, buying one or more in your 60s can still be a great way to put a floor under your income and “give you permission” to spend your money, since you know there will be more coming the next month.

“Longevity Insurance” is a similar product. It's an annuity, but instead of issuing you monthly payments as soon as you buy it, it delays those monthly payments, sometimes for a long time. For instance, you might buy an annuity at age 70 that does not start paying until age 90. However, since plenty of 70-year-olds who buy this product die before 90 and because the insurance company has 20 years to invest your money, it pays out A LOT of money starting at age 90. That “gives you permission” to blow through a lot more of your assets between 70 and 90 than you otherwise could. You know you won't be hosed if you live to 98 because starting at 90, you have another source of substantial income. There is some data that people who buy annuities live longer, too. While no one doubts that incentives matter, correlation is not causation. Maybe those who are more likely to live longer are just more likely to bet that way.

As you can see, there are at least eight methods you can use to ensure you do not run out of money in retirement. Track things carefully, and if it appears you are on an unsustainable pathway, employ one or more of these methods to fix the issue.

What do you think? What are the best ways to make sure you don't run out of money in retirement? Would you rather spend less or earn more? Comment below!

What if the company that provides the Longevity Insurance goes out of business before you reach the age of 90?

Is the company that offers this kind of insurance covered by the state if it goes bankrupt?

Yes, the state guaranty association covers up to a certain amount, but it isn’t all that much. Strength of the company matters when buying a product like this. Don’t put too much with any one company.

Hi Jim, timely post… I was listening to a story on NPR this week about tontines and wondered to myself… “I should ask Jim about these”. Basically it’s a pooled trust that will pay out dividends (or lump sum) to surviving members of the trust. I seems like a tontine could be a way for investors of a similar age/health cohort to pool a portion of their assets for longevity insurance. What are your thoughts? Could this option be added to your list of strategies?

Tontines are mostly a historical thing. Think of annuities as today’s tontines.

Tontines are illegal in a lot of places – led to too much murder!

I have a similar concern though, if my index portfolio vanished then the only payout left would be the mortality credits. Since it’s truly meant as longevity insurance I was thinking about buying one in a different economy/international stock market for an added layer of diversification.

PS The captcha has gone squirrely, it kept popping up because it ‘expired’.

Are they really? Never heard that.

I’ll have the tech guy look into the Captcha. He’s back from Europe today. I’m getting a lot of spam comments the last few days too.

What a great post Jim, God bless you for what you do.

For those you can without a large tax bill, converting to Roths is a very prudent move as Tax Rates will surely be higher in 2026
As well move to a state with no state income taxes and lower cost of living(like Florida)

No guarantee of future tax rates being higher. There are two elections between now and 2026.

The annuity income rates of public sector retirement systems are much more generous than those of large life insurance companies. Annuitizing with a commercial insurance company is a no, no!

Agreed (delaying SS too is much better), but the question is what to do when you don’t have that option.

There are over 2,000 books picking apart how Warren Buffett built his fortune. But none are called “This Guy Has Been Investing Consistently for Three-Quarters of a Century.” But we know that’s the key to the majority of his success