A good buddy of mine (and also a longtime sports writer) once told me that if you use every single quote you get during an interview for the article you’re writing, chances are what you’re writing is going to be pretty mediocre.

Basically, as he said it then and as I follow it today, if your interview with the source was too short or too narrow-focused that your article is in desperate need of absolutely everything that the person said, then your interview simply wasn’t good enough. And your article or column is going to suffer for it.

Like a feature film, you ideally should have plenty of material lying on the cutting room floor. Lots of extra quotes, maybe a few anecdotes, a couple of asides that simply couldn’t find their way into the final column. Either those quotes/anecdotes didn’t fit the narrative, or they would have made the column excessively long. More content left on the cutting room floor is always > than not enough. Even for the books I've written (where hundreds of thousands of words have been spilled), there was so much content that didn't make it through.

For the last month, I’ve written about doctors on social media: how and why they’ve become TikTok stars and the downsides of dealing with that fame. I have plenty left over that I couldn’t fit into those columns. Plenty of it is quality, and so, for this week’s column, I’m, as we sports writers would say, “emptying the notebook” and writing about some of my favorite quotes/anecdotes that I had to leave on the cutting room floor.

It's a random assortment of content, but I didn’t want it to go to waste. Call this: Doctors on TikTok (The Director’s Cut).

Coming from a Family of Addiction

Dr. Tommy Martin, who has more than 2.2 million TikTok followers did not have an easy upbringing. As he told me, he came from a broken home that he said “was destroyed by alcohol, drugs, and addiction.” His family didn’t have much money, and he was the first among them to attend college. But he worked hard, got into medical school, turned himself into a meds-peds attending, and built a huge TikTok following. That’s why he sometimes talks about his faith on his channel and why he so badly wants to inspire his audience.

“It's being able to lean into my faith and know God saved me in one of the darkest places in my life,” he said. “I never wanted that for my future family. I’ve never tasted alcohol, because I didn’t want to take the risk of repeating that cycle.”

Another reason Martin wants to inspire his fans: he’s shown it’s possible for doctors in training to graduate from medical school, work hard as a resident, and land an attending job while also training for the Iron Man triathlon.

♬ Legends Are Made – Sam Tinnesz

Revealing Herself to the Public 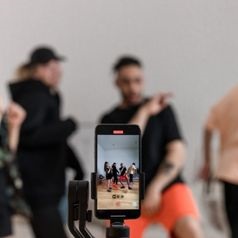 Dr. Ali Rodriguez, an OB-GYN, is not shy about sharing content about pregnancy, how to protect yourself against sexually transmitted diseases, and abortion rights. She also shares personal anecdotes, including her own choices for birth control (she once said on TikTok that “I will be buried with an IUD”) and grooming habits.

I asked her about how she decides how much of her personal life she wants to share with her 1.5 million followers. She said she began revealing more of herself when she was in residency because people were genuinely curious about the process of training and how residents lived their lives.

“I wanted people to understand it more,” she said. “This was going to give a peek into my personal life. People genuinely want that. They crave that human connection. I’m also a real person. While yes, I’m knowledgeable, I still go through it all. I still get burnt out. I still love to go shopping. I still go out. You can be a professional and also have a life. I’m very open about that.”

“Many people have said I should do YouTube,” Chan, an ophthalmologist, told me. “But it’s very intimidating to me. A lot of YouTube videos are polished and edited. It’s professionally put together.”

That’s a good point. After all, Rodriguez hired an editor to help with her YouTube channel.

“I just don’t have time for that,” Chan said. “I know there are a lot of physicians who are YouTubing, and that’s awesome for them. I just didn’t have the bandwidth for that. What’s great about TikToks are they’re very raw—most of them. Quick cuts, 15 seconds, much more manageable.”

How Much to Include Your Family on Social Media

Martin occasionally makes videos about his son, Oliver, who has a rare neurodevelopmental disorder called Lamb-Shaffer Syndrome. I asked him about walking the line between introducing your family onto social media—especially considering the cesspool that social media can be and because introducing your young child, who obviously doesn’t always have their own autonomy, as part of your world of content can be tricky.

“It’s something everyone has to think about, especially with the way social media is and how they can go viral,” Martin said. “You want to protect your family. My wife and I are at a point where we’re conscious of what we’re posting with our kid to bring awareness to his disorder and to represent the family.”

There’s little doubt, though, that Oliver is adorable.

Dance the Night Away

So, what about the dancing that, in many ways, built TikTok into such a major social media force? Rodriguez is often found dancing on her channels.

Said Rodriguez: “I know it’s cringy. But screw it, I like to do it so I’m going to do it. I’m OK making a fool of myself. I’ve always been that way. I’m going to wear what I want to wear, because I think it looks cool. Even though some people might say, ‘Really, you’re going to wear that?’ I think I look great.”

For the first time since 2019, I attended the ACL Festival last weekend. The Red Hot Chili Peppers were headlining the day we went, but I was also interested in hearing the pop-punk stylings of Paramore. It seems like every person I know between the ages of 25–35 fell in love with Paramore and lead singer Hayley Williams when they were in high school (or middle school), and now, I can see why.

Williams had loads of charisma and talent, the band sounded great, and the crowd couldn’t get enough of the hour-long set.

As good as Paramore was at ACL, let’s also take a second to applaud its ability to produce passive income.

In 2007, Paramore released “Misery Business,” probably its biggest hit to date. It even causes other musicians to weep at the thought of singing the song with the band, as shown here with British pop singer PinkPantheress last weekend.

Money is not the topic of this song, but in this day and age, when teenager Olivia Rodrigo can rule the charts, “Misery Business” got plenty more profitable for Paramore 14 years after its release. That’s because when one of Rodrigo’s big hits, “Good 4 U,” was released in 2021, you didn’t have to be an eagle-eared listener to realize, “Hey, this Olivia Rodrigo song sounds kind of familiar.”

That’s because, well, Rodrigo, at the very least, was inspired by “Misery Business,” and as a result, she eventually gave writing credits to Williams and former Paramore guitarist Josh Farro for the song. Which means that Williams and Farro got a nice bump in their bank accounts because of Rodrigo.

You can see why in this video that compares the two songs.

As Variety reported, it’s hard to determine how much an artist will make from a song’s royalties, but a good, strong hit could be worth between $1.2 million and more than $2 million for the writers.

“While there’s definite upside ahead for ‘Good 4 U,' remember that the estimated $1.4 million doesn’t belong to Rodrigo alone. Half of that goes to whatever publishers are involved; in this case, Sony Music Publishing represents Rodrigo and Dan Nigro, the producer who co-wrote eight of the 11 songs on the album ‘Sour,’ ‘Good’ among them. Now, with Williams and Farro added to the credits, Warner Chappell Music has a piece of this, too.

After you bake off the publisher’s share, the remaining $700,000 gets split between the writers, which now number four. Multiple sources confirm that Rodrigo’s camp is giving a 50/50 split to the two Paramore members . . .”

So, maybe Williams and Farro wind up with $175,000 a piece because of the Rodrigo smash hit. Or it could be much more. One music attorney told Variety, “A song like that can earn $10 million [in royalties].” If that prediction came true, it could earn Williams and Farro $1.25 million a piece.

Here’s how Rodrigo responded in Teen Vogue after all the money news emerged.

“What’s so beautiful about music is that it can be so inspired by music that’s come out in the past,” Rodrigo said. “Every single artist is inspired by artists who have come before them. It’s sort of a fun, beautiful sharing process. Nothing in music is ever new.”

And if it’s not new, chances are that somebody else is going to get paid. Not bad for a side hustle that Paramore probably never anticipated.

Sometimes, it’s better to be lucky than good, and sometimes, timing is everything.

My real estate genius was being 36 years old with one kid and plans to have another in 2017, buying a house before the pandemic, and then refinancing last summer. Thanks to my parents for having me in 1981 instead of 1989. https://t.co/1J8ehr5vbn

So, are you finally ready to start your own physician TikTok channel? Could you stomach dancing by yourself on video for the benefit of a bunch of strangers? Comment below!

Only one in four doctors in the high-income category has an investment portfolio worth $1 Million or more.