Although most of us get this rotten feeling in our gut when we think of the word communist, the word capitalist also often brings an unsavory thought to mind.  We think of the Monopoly man or the robber barons of a century ago.  No matter how we feel about Karl Marx, however, when you really think about it, saving for retirement is all about becoming a capitalist.  Charles Farrell, in his 2010 book Your Money Ratios, which I reviewed recently, espouses what he calls the Unifying Theory of Personal Finance, which is this:

All decisions you make should help move you from being a laborer to being a capitalist.

As a laborer, you are paid a wage for your services.  It does not matter if you are a police officer, factory worker, doctor, lawyer, scientist, clerk, landscaper, or baseball player.  You are paid a wage for doing some form of work.  You are exchanging work for money, which means you must labor for your money, and are thus a laborer….As a capitalist, you are paid not for the value of your labor, but for the use of your money.  This payment can come in the form of interest, dividends, or price appreciation, but in one way or another, you are being paid to allow others to use your money.  This is the essence of investing, and thus being a capitalist.  If you hope to retire someday, you will need to become a capitalist–someone who generates income from their capital.

This is how labor and capital are related.  You must start out as a laborer to generate income.  You then save a portion of that income every year.  Those savings become your investment capital.  As your capital builds, the payment for the use of your money grows.  Once your capital is large enough, the payment for the use of your money will replace your wages, and you can retire….This is generally a 40 year process that starts in your mid 20s and ends sometime in your mid 60s.  It usually takes each of us that long to build up enough capital such that the income from that capital can replace our wages….To make that journey from laborer to capitalist, you must effectively manage the core issues of personal finance: deciding how much to save each year, how much capital you should have accumulated at each age, how much debt to carry, how to prudently invest your capital, and how to purchase insurance to protect your capital.

Now, obviously there is an endpoint to when you become a capitalist, and that is when you reach financial independence, your “number” if you will.  But getting to that point is all a continuum.  Charles Farrell discusses an important point on that continuum, which he calls the Secret of Two Times Pay.  He says this is the tipping point when your wealth starts to accumulate.  Why two times earnings?  Because at that point, the earnings on your savings should generally exceed the amount you save each year.  This number varies depending on your savings rate and investment earnings, but using his assumptions of a 12% savings rate and a 7.5% return, the answer is two times earnings.  If your savings rate were 30%, and you were earning only 5%, the tipping point would be Six Times Pay.  Six Times Pay is awfully close to my financially independent number where I don't need to work at all. 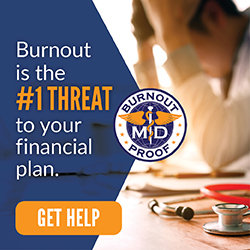 The other issue with Two Times Pay, particularly for doctors, is for someone with a rapidly increasing salary.  I've got well more than 2 times my residency pay, but much less than 2 times my final attending pay saved up despite a high savings rate for the last 8 years.  So I disagree that there is a well-defined tipping point, but I do agree that your early savings are much more valuable than your later savings due to the benefits of compound interest.  Early on, your investment earnings and asset allocation just don't matter much.  I don't care if you earned a 50% return on a $10K portfolio, it just isn't going to carry you very far.  At that point it's all about your savings rate.

Also, keep in mind that the shorter your career (i.e. early retiree) the more of your final number will be made up by your savings rather than compound interest.  For a typical 30 year career, only about 30% is from savings, but for a 20 year career, about 60% of the final stash will come from savings.  In fact, very early retirement is so much harder than a more traditional career (that is, requires more lifestyle sacrifice before and after retirement), that even well-informed and disciplined doctors will conclude that it isn't worth the sacrifice.

“All decisions you make should help move you from being a laborer to being a capitalist.” – this is such a simple, yet profound and powerful statement. The ideas in this article are so very true. This is perhaps one of the best articles on personal finance.

If you have trouble imagining a 20% loss in the stock market, you shouldn't be in stocks.