This post was originally written during the bear market in August 2011. What? You don't remember that one? You've probably forgotten the December 2018 one too. Funny how that happens in retrospect. At any rate, I think it's good in times like these to step back and look at previous episodes of volatile markets and realize how small of a blip they turned out to be in the long run. You see, every time it feels like this time is different, but after going through a few bear markets, you realize you've seen this movie before and you know how it ends. All that matters is the price you buy at and the price you sell at 30+ years later. Every in between is just noise. If you want to be a successful stock investor, you need to remember that and play the long game. 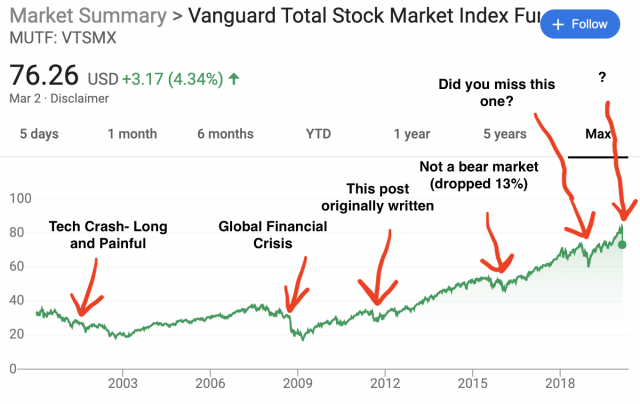 On the date I wrote this post originally, the 2011 bear was not complete. In retrospect, it turned out we had dropped about half as far as it ended up dropping before rebounding. I can't call the bottom any better than anyone else. But I have seen this movie before, and I know how it ends.

Sometimes it takes a long time to come back, like in 2000-2003. As you can see, it really didn't recover its highs until almost before the Global Financial Crisis. In fact, in 2011, the market indices were still not back to 2008 levels. The last three bear markets, however, have had quick recoveries. So fast sometimes that people are still talking about our “11 year bull market.” However, I have had significant money invested for all of the last 5 significant drops. Each one is unique. Each time it hurts. But each time enduring them becomes easier. With exercise, financial muscles grow.

I have no idea where this “CoronaBear” is going to end. It might end this month, like in 2018. It might end 3 years from now, like in 2000-2002. It might take a few years to come back and then tank again, like in 1937. But you don't buy stocks with money you need this decade, much less this month. There are only two reasons to bail out at this point, and neither of them are good.

I'm not going to make either of those bets, so I'm going to stay the course. If we're lucky, in a few years you won't even remember what caused this dip. I bet you don't even remember what caused the 2011 dip (European sovereign debt crisis), the 2015/2016 dip (Great Fall of China/Brexit), or 2018 (Trade war fears). If we're unlucky, we're going to look back on this and be writing books about it for decades (Tech Crash, GFC). But either way, what you should do now is exactly the same: Stay the course!

What Does Stay the Course Mean?

There are a few things to remember at moments like these:

#1 Investing for the Long-Term

You're not investing for a day, a week, a month, a year, or even a decade.  Your retirement portfolio likely won't be used for decades, and even after you start spending it, you'll do so over 20-40 years. A two week period has almost nothing to do with the eventual value of your portfolio either at the time of retirement or the amount you withdraw throughout retirement.

No matter what their yield, or how unattractive other asset classes may be, stocks have a nasty habit of losing a lot of money in a short period of time.  Those who invest in stocks need to realize that this type of behavior is NORMAL for stocks.  This is what they do.  There is a reward for this behavior, called the risk premium.  This is the reason that in the long run stocks are expected to return more than bonds and other less risky assets.  John Maynard Keynes said, “I should say that it is from time to time the duty of a serious investor to accept the depreciation of his holdings with equanimity and without reproaching himself… An investor should be aiming primarily at long-period results.”  Things are never as good as they seem, nor as bad as they seem.  John Bogle likes to say, “If you have trouble imagining a 20% loss in the stock market, you shouldn't be in stocks.”

#3 It is Important to Diversify Your Portfolio 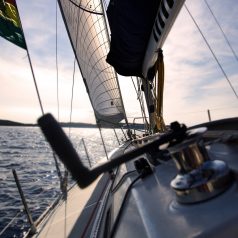 A 100% stock portfolio would lost 12% in a week last couple of weeks.  If that portfolio were 50% stocks and 50% bonds, your loss would be less than half that. Few investors can tolerate a 100% stock portfolio.  Even back in 2011 many people felt bonds were overvalued and that we were in a bond bubble. Not only was that not the case, but bonds served an important portfolio function in tempering losses.

Many investors, particularly young investors with small portfolios who have some knowledge of market history, get excited when the stock market drops.  They see it as buying “on sale.”  Some of these bought early last week only to watch their investment take a bigger drop on Thursday.  Just because the market has gone down recently doesn't mean it can't continue going down, or that it must come up sometime soon.  While it is true that you are better off paying less for an asset, buying something just because it has gone down recently doesn't necessarily work out well.  I caught a lot of falling knives in Fall 2008.  It all worked out okay in the end (and I had lots of tax losses I harvested), but in retrospect, I was definitely too eager to jump in.  Emotional investing is rarely a good thing, even if you are being a contrarian.

Invest when you have the money.  Have a written investment plan.  Rebalance your portfolio as dictated by your plan (either on a time basis, such as annually or on a percentage basis, such as using the 5/25 rule).

#6 You Can't Predict the Future

I can't predict the future, and neither can anyone else, including you.  A little humility will help you be a better long-term investor.  If you are still of the misunderstanding that you can predict the future and time the market, I suggest you start writing down your specific predictions.  Go back and look at them in a few months or a few years.  You may be surprised at how wrong you were.

I'll address this before but just remember that in a taxable account you might as well take Uncle Sam up on his offer to share in your losses.

John Bogle wrote, “Stay the course.  No matter what happens, stick to your program.  I've said “Stay the course” a thousand times, and I meant it every time.  It is the most important single piece of investment wisdom I can give to you.”  Bailing out of stocks at market lows is the easiest way to torpedo your investment program.  Yes, it feels hopeless when you read the newspapers or watch CNBC, but this too shall pass, and those who stuck with a solid investment plan will be rewarded when it does.

=”2″ link=”1y9I7″ via=”yes” nofollow=”yes”]Bailing out of stocks at market lows is the easiest way to torpedo your investment program.  Yes, it feels hopeless when you read the newspapers or watch CNBC, but this too shall pass, and those who stuck with a solid investment plan will be rewarded when it does.

What do you think? Do you think it's wise to make portfolio changes in response to market events? Or better to stay the course and ride it out? Why do so many “long-term investors” seem to think so short-term? Comment below!

A human being should be able to change a diaper, plan an invasion, butcher a hog, conn a ship, design a building, write a sonnet, balance accounts, build a wall, set a bone, comfort the dying, take orders, give orders, cooperate, act alone, solve equations, analyze a new problem, pitch manure, program a computer, cook a tasty meal, fight efficiently, die gallantly. Specialization is for insects.