Three hundred and fifty days ago, we published the 2022 crystal ball predictions from White Coat Investor readers. I was pretty sure most of them would be wrong. Maybe somebody would get lucky, but for the most part, I figured that there’s a reason why one of the mantras on this site has always been (and I’m paraphrasing here): Yeah, don’t ask me to predict the future, because my crystal ball is cloudy.

At the time I wrote my column in late 2021, the panic around the COVID pandemic was mostly subsided, the stock market was riding high after gaining 27% for the year, and cryptocurrency was shooting toward the moon. I Bonds were a hot commodity, but rising inflation was beginning to worry some people.

Twelve months later, the world has changed dramatically. Just like it does every year.

For just a second, let’s return to the time of January 2022—when people didn’t know what they didn’t know but gave valiant predictions anyway—and figure out if anybody got anything right.

[Editor’s Note: I’m going to publish the 2023 version of Your Crystal Ball Predictions in a couple of weeks. I’d love to hear your thoughts on what’ll happen in the next 12 months. I don’t care if your prediction is obvious or outlandish, funny or fiendish. You can be anonymous or you can shout your name from the rooftops. I just want to know what you’re thinking. Email me at [email protected] and give me your best crystal ball predictions.]

Here were some takeaways from Alejandro Romero, an orthodontist from Oklahoma:

“Inflation will continue and it will be at least 5% . . . The presidential policies will try to maintain or reduce oil production in the US, and they will try to negotiate/force OPEC to increase production, which they will not. Hence, we will see an increase in gas/energy prices in the US . . . The president and Congress will start talking about the minimum wage more and more. There will be a push for an increase in minimum wage that will, in theory, not only ‘catch up’ with inflation, but will ‘provide' the lower earners with a ‘better' quality of life . . . Bonds will perform better in 2022 than 2021 but will not account for inflation . . . Stocks will continue the ‘bullish' market, but not at the crazy rates seen in 2020 and 2021. Some winners, some losers, but overall, the market will be bullish at a ‘modest' 9% . . . Taxes will go up for everyone . . . The Backdoor Roth IRA will NOT go away . . . Formal conversations will start about controlling or regulating Bitcoin and the like; it will become less attractive for the current investors, and the three most popular crypto currencies will lose value (Bitcoin, Etherium, Tether) . . . Why not, I'll throw this in there: SDC (Smile Direct Club) will file for Chapter 11.”

Alejandro actually sent me a total of 22 predictions. I only printed some of them. Alejandro got a number of predictions correct (inflation rose even higher to 9.1% in June, we saw a large increase in gas prices for a while, bonds performed better, the Backdoor Roth process survived, the federal minimum wage moved to $15 per hour, and crypto lost a ton of value). Though he certainly missed on the prediction that the bull market would continue with modest gains—SDC is also still chugging along—Alejandro did well overall. 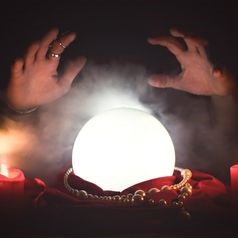 From one physician who preferred to remain anonymous:

“We will have to mandate vaccines wherever we enter a building to combat vaccine resistant people. You cannot enter banks and restaurants without a QR code. People get the vaccine out of convenience. It will be like an airport check kind of thing when people reluctantly comply. Only then will we get COVID under control and decrease a major mutation outbreak. And it will take another half-year after that to fully squash COVID if everyone complies. Otherwise, the Fed will have to combat inflation soon to prevent an economic collapse.”

Luckily, this post-apocalyptic vision regarding vaccines and QR codes has not come to pass. But COVID still isn’t squashed, and mutations are still happening. This person was correct about the Fed being aggressive in combatting inflation.

From Daniel Iyer, a DVM from Georgia:

“There will be another financial collapse and a sudden increase in unemployment. The country will still be divided, but in the end, love will trump hate. There will always be a superfluous number of rich people, but they will never be wealthy in the end.”

There certainly has been an increase in unemployment, particularly in the tech world where Twitter, Microsoft, Amazon, and a slew of others have laid off tens of thousands of workers. For the most part, though, the US unemployment numbers have hovered in the 3.5%–3.7% range for most of 2022, the lowest numbers the country has seen since 2019. Here’s hoping Daniel is right about love trumping hate. I don’t think that’s happened quite yet, though.

From J. Jarred Molitoris, an MD from Ohio:

“I decided long ago that my crystal ball, when it comes to financial issues, does not work. Having said that, I am predicting more record levels for the S&P/Dow. I think the progress on the vaccines and boosters, along with an eventual ‘infrastructure' plan will boost the economy over the next 12–24 months. I specifically think value and small cap will fuel the increase in the S&P.”

The stock market obviously has taken a nosedive, as the S&P and the Dow are down about 16% and 7%, respectively. As for Vanguard’s Vanguard Value Index Fund (VVIAX), it’s slightly down for the year and Vanguard Small-Cap Index Fund (VSMAX) is down about 16%.

From an anonymous emailer:

I don’t know if this was a troll prediction, but Bitcoin did reach about $65,000 earlier this year. It’s currently at about $16,000. Yeah, not a great year for Bitcoin and crypto in general. Not a great prediction either.

Jim Dahle, WCI founder and an MD from Utah

“My crystal ball is always cloudy, so I hope nobody actually acts on my predictions. But my best guesses for 2022 are: 1) Bitcoin and other crypto assets will continue to be extremely volatile but will neither go to zero nor have massive gains in 2022; 2) Inflation will be worse a year from now than it is currently but trending down; and 3) Interest rates (mortgages, bond yields, savings account yields, etc.) will be up at least 1%.”

Well, most of that is pretty spot on. Inflation was at a 40-year high this year (though it's trending downward in the final few months of 2022), and interest rates rose 3%. But Jim’s crystal ball wasn’t as cloudy as he might have believed.

Again, reach out to me at [email protected] to let me know your crystal ball predictions for 2023. Let’s have some more fun about being totally wrong!

I recently spent a week in Jamaica, so I’m still in a reggae state of mind. Aside from listening to Bob Marley in college (such a cliché for a middle-class kid from suburbia, am I right?) and seeing Ziggy Marley play at a festival in the 1990s (where he played mostly Bob Marley songs), I haven’t had a ton of exposure to reggae.

And though I’m much more into ska than reggae, this 1972 tune from Dennis Brown, Money in My Pocket, is delightful. It’s a pretty simple message: As the title implies, he’s got money in his pocket, but it can’t buy him what he really wants.

No telling what kind of love Dennis Brown had in mind, but the lesson behind the song is an important one: Money can’t buy you love, which is something Paul McCartney and Patrick Dempsey know a little something about.

Even though the song was one of Brown’s biggest hits, it sounds like it didn’t age well for him. In a 1999 interview he conducted not long before he died, Brown said he used to love those kinds of songs but didn’t much care for them anymore. “It come like a joke song to me. Yet it is the first song that make me get internationally established. You see, Money in My Pocket to me is like . . . it’s synthetic. You give a joke or something to that effect.”

An easy reminder for people who are long-time WCI fans: Whole life insurance most likely isn’t for you.

Whole life insurance is an amazing investment and source of income for the person selling it to you.

I have 2023 predictions and beyond, if we want to “house” them here.

By the way, if you are self employed and have an individual or solo 401k, you have to contribute by the end of the year, can’t wait like with IRAs (til April 2023), correct?

Employee contributions need to be in by the end of the year. You have until tax day to make employer contributions.

Yes, the deferral “contribution” is the employee one, and the employer one can wait, thus you could see your numbers as a self employed type employer/employee, is that right, Doc?

The markets continue to go down (as I’ve stated), with the next bottom near 3200ish S&P, unless something breaks and swans it even further – which is possible. Recession is here, but in 2023 few will have a problem still lying about it and mainstream media will finally admit it. Others will know, reading between all these lines, that we’re closer to a depression. But hey, all these are just terms anyway, I get it.

BTC will go down with the markets, but will also reach its bottom in the cycle, and at the middle to end of 2023, it will ascend, making new all time highs in 2024. This move will likely coincide with late year 2023 pivoting by the Fed, which will take a while to affect stocks, but they’ll go up after that too.

Major geopolitical heat hits in earnest in 2023. We are already in WWIII, but most just don’t know it or act like it. I’ll reserve the rest of my predictions for later.

As Jimbo knows, I’m bearish on stocks/markets for the longer term. Stock picking will be required, at a minimum sectors. Commodities and energy will be the best performers over the next decade.

Interesting predictions. Mostly pretty vague, but a few there that will either be right or wrong.

You can point out which ones you’d like more clarity on. But at least put a few out there yourself. It’s easy to criticize down the line when you didn’t have skin in the game.

I am putting my money where my mouth is, but as for this blog, one doesn’t necessarily have to do that, so he should just take a best guess at what he think will happen in 2023 and beyond.

Agreed. You’ll see mine from last year in the post above. I actually did pretty well, but mine were also pretty vague, which is the key to accurate predicting! If Josh does this again, I’ll come up with some more. But they won’t change my investment plan.

January might end up being a fairly crazy month for the more upbeat among us (not me, obviously). We can weigh in more and with greater specificity at that time. It should be fun.

As we seek the [financial advisory] help we unquestionably need, these helpers, like 18th century doctors, are just as likely to harm us. The simile is apt, because the prescribed treatment inevitably will entail the application of leeches