This post falls into the category of “that's interesting.”  For all but the medical students reading, there isn't a lot of actionable information here.  But it is difficult to find this information out there.  Physician income information is relatively easy to find, but work hours information is notoriously difficulty to find.  The only information that combined physician work hours with their income is from a survey in JAMA published in 2003, and obviously using even older data.  Here's the “money shot”: 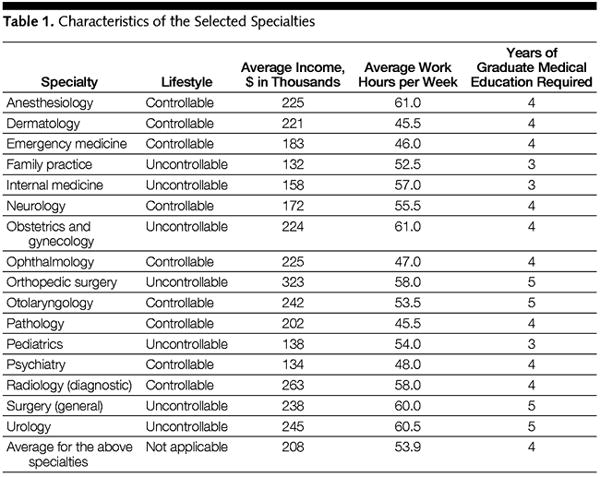 There's a lot of information there, but I'm just going to use the 4th column, the average hours worked.  I'm also going to adjust the column for the trends we're seeing in medicine of decreasing hours.  Over the last 15 years or so, physicians have been cutting back on their work hours.  Part of this is decreasing compensation and increasing practice burdens, part is a greater focus on lifestyle issues, and part is due to increasing numbers of women in our ranks who are more likely to work part-time and/or take off significant time due to pregnancy/child-rearing issues.  At any rate, it works out to about a 2 hour per week decrease since 2003.

Now, let's find some reasonable salary data out there.  Medscape has a survey using 2009 data.  [Update:  That link was no longer any good.  Here's the 2013 version of the survey.] I've used that data and combined it with the hours in the table above adjusted for the decreased work hours I've noted.  I've also made the possibly erroneous assumption that all physicians work 48 weeks a year.  Also, where I don't have the data, I've tried to fill it in from other, less reliable sources.  Those figures have an asterisk next to them in the table.  Here's what we end up with:

Now, I'm sure there are plenty of inaccuracies in this table.  For example, in my specialty (emergency medicine) there is a great survey I participate in every year, the Daniel Stearns Survey.  It showed the average emergency physician in 2010 made $278,000 in 1700 hours, for an hourly rate of $155, significantly more than this analysis shows.  But nonetheless, there are some useful trends to analyze.  For example, among specialties with three year residencies, hourly income ranges from $78 (FP) to $121 (EM).  Specialties requiring four years of training show a range from $94 (Psych) to $146 (Derm).  Five year specialties range from $117 (Gen Surg) to $187 (Ortho).  The only six year specialties I've included pay $179, although I know others tend to be relatively poorly paid such as many internal medicine-based and pediatric-based subspecialists.  I've always found it interesting that emergency doctors do a two year fellowship to specialize in pediatric emergency medicine only to make less money than they made before specializing.  Many other subspecialists, especially academicians, are in the same boat.

You can also see that if you want to get into the $100 an hour club primary care is pretty much out.  Procedures are where the big bucks are, not only as a general rule among specialties, but also within a specialty.  I find it embarrassing how much higher my reimbursement per time spent is from reducing a phalangeal dislocation or suturing a facial laceration compared to dragging a history out of an 85 year old demented patient and her family and reviewing her records.  If only I could get an entire clinic full of patients with nursemaid's elbows then maybe I could break into “The 1%”.

Lastly, if you go to the trouble to calculate out your hourly wage (and especially if you do it on an after-tax basis), you can see what services you're currently paying for that might be worth doing yourself.  For example, if you're an FP, making $78 an hour, let's say $52 after tax, and you're paying someone $40 to mow your lawn, but can do it yourself in a half hour, then you might want to consider doing it yourself and making twice as much as you make at work.  On the other hand, if you're an orthopedist, and have cut back on your hours to allow time to build on an addition to the house, you might want to consider hiring it out.  As I've mentioned before, managing your own finances and investments is still one of the highest-paying activities you can do, on an hourly basis.

Nursemaid’s all around, for everyone!

As a future pediatrician, I already knew that the income vs. time and energy expenditure was not great. Oh well, must continue to not give in to lifestyle creep.

Great site, keep it up.

Great article! What do the asterisks in your chart stand for?

Here is a link to the 2012 Medscape report on physician salaries: http://www.medscape.com/sites/public/physician-comp/2012

Asterisks are where the data is more suspect. Good idea on using the medscape data to update the numbers. Although I confess I’m a little skeptical of that Medscape data.

You should check your number of years of training figures. I think you are omitting required internships before the residency begins.

Which ones look wrong to you?

I guess it is only Radiology, which is 1 year internship, 4 years residency, 5 years total

Radiologists tell me that pretty much everybody does at least one fellowship (1 yr), increasing the PGY education from 5 to 6 years.

The original table stated that radiology required 4 years of post graduate medical education. While the radiology residency is 4 years, that does not include the required 1 year internship nor the required-for-employability fellowship. That makes a miminum of 6 years post-graduate training. Many, including myself, are doing two fellowships to get a decent job in the current job market. That makes it 7 years–same as neurosurgery. The figure of 58hrs a week seems pretty accurate though. Five 10-11 hr days per week plus an overnight call every 1-2 wks seems typical.

I have no first-hand knowledge of the depression. My family had one of the great fortunes of the world and it was worth more than ever then. We had bigger houses, more servants, we traveled more. I really did not learn about the depression until I read about it at Harvard.