“Medicare premiums are going down and Social Security benefits are going up in 2023, which will give seniors more peace of mind and breathing room. This year’s substantial Social Security cost-of-living adjustment is the first time in over a decade that Medicare premiums are not rising and shows that we can provide more support to older Americans who count on the benefits they have earned,” Acting SSA Commissioner Kilolo Kijakazi said in a statement.

If you’re a retired medical professional or a doctor planning on Social Security in retirement, here’s how this impacts you and what you need to know about the COLA increase.

If you’re retired and receiving Social Security benefits, your monthly payment will go up by 8.7% next year. For those on a tight budget, that increase is a huge relief among rapidly rising prices at the grocery store, gas pump, and elsewhere.

The Consequences of Ignoring Social Security

What the Social Security Adjustment Means for Retirees

According to Social Security data, the average retirement benefit payment is $1,681 per month in 2022. With the new COLA announcement, the average benefit should go up by about $146 to $1,827 per month for 2023.

An increase of $146 per month adds up to $1,752 per year. While that isn’t a make or break for most retired doctors, it’s a big deal for those without significant retirement savings.

Many experts suggest that you save at least 15% of your annual gross income (that’s before taxes and deductions) for retirement to maintain the same quality of life during your golden years—keep in mind that Dr. Jim Dahle advocates for saving 20%. Social Security alone is often enough to keep someone out of poverty but not enough to stay in the same home and keep up with medical costs, maintain your normal living needs, and have enough left over for leisure and recreation.

The maximum possible Social Security benefit for 2022 is $4,194 for someone taking benefits at age 70 for the first time. If you were a top earner for your career and qualify for the top benefit level, an 8.7% increase is worth $365 per month. The new top payment for 2023 would be $4,559 per month.

Here's some other interesting information, via the Social Security Administration.

While rapid inflation can be painful, you shouldn't panic. This is a challenging economic time, but it's not unlike challenges seen in the past. Despite attention-seeking headlines, inflation has reached rates as high as 13.5%, much higher than what we’re experiencing today. As of mid-October 2022, inflation was at 8.2%.

And also, just like today, the Federal Reserve lifted interest rates to combat high inflation. Eventually, it returned to the target level, and there’s no reason to expect the same won’t happen again after a period of sometimes painful economic shifts. 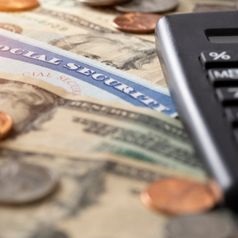 5 Reasons to Not Give Up on Social Security

Investing for retirement is a multi-pronged process. Social Security often plays an important role, even if you have an additional 401(k), IRA, or other retirement account. But when it comes to COLA, today’s retirees have something big to celebrate.

If you're getting close to retirement or are already there, does the COLA increase for Social Security give you a sense of peace? Why or why not? If you're not retired, does this increase affect your future planning? Comment below!

If you were lucky enough to be born in 1961, you will benefit from the 8.89% increase in the average wage index for 2021. The AWI in the year you turn 60 is used to determine your social security benefit. The AWI for 2021 was the biggest increase since 1981, meaning that those born in 1961 will receive larger benefits than usual for the remainder of their lives.

You are not lucky if you were born in 1961. The 8.89% increase in the 2021 AWI does not offset the missing COLA adjustments at ages 60 and 61, so inflation adjusted benefits actually decrease by about 5% even after including the AWI increase.

Surprised that there was no mention of how those born in 1960-62 will not see the same COLA benefits as others simply due to their birthyear.

Yes, that would have been a nice thing to mention. A thorough discussion of the issue can be found here:

"I don't want the smartest guys managing my money, I want the luckiest ones. But since I don't know who those will be, I'll settle for the ones who skim the least off the top."