Let's decide, for a moment, that you actually want to invest (speculate might be a better word) in cryptocurrency. How would you go about doing it? There are actually a surprising number of ways to get your money into the digital currency market, but some are far easier than others.

Where to Invest in Cryptocurrency

There are a lot of cryptocurrency exchanges out there, including Binance, Coinbase, FTX, KuCoin, Gate.io, Kraken, Huobi Global, and Bitfinex. However, the largest one that US residents can use is Coinbase. It is only about one-quarter the size of Binance, which is not allowed in the US, but it is as large as the next three exchanges combined. You can trade every cryptocurrency mentioned in this article at Coinbase. However, you probably won't like the fees as they will seem ridiculous to anyone used to buying investments at Vanguard, Fidelity, or similar brokerages. You're going to pay 0.5%-3.99% per trade, but if you switch to Coinbase Pro (the actual exchange instead of just hiring the company to make things less complicated), you get lower fees—usually no more than 0.5%.

Robinhood is not even close to my favorite brokerage, because I don't like all the gamification and encouragement it does to get people to trade more often—which is usually bad for the investor's financial health. However, you can trade cryptocurrency at Robinhood. It's big advantage? No fees. Like with its stock trades, it makes money through order routing. Robinhood lists 16 tradeable cryptocurrencies on its website, but Nevada and Hawaii residents can't use this option.

Webull does not technically charge fees either, but it does include a 1% mark-up (with $1 minimum) of the cost of the currency, which is basically the same thing. It lists 20 tradeable cryptocurrencies, as I write this.

You can buy cryptocurrency through your PayPal account if you want. Fees range from 1.5%-2.3%, and the only cryptocurrencies available are Bitcoin, Bitcoin Cash, Ethereum, and Litecoin. The main benefit is that you probably already have a PayPal account, and Paypal makes this really easy to do.

Not to be outdone, you can buy crypto at Venmo, too. It has basically matched PayPal's offering with the same fees and available cryptocurrencies. I guess that's not a surprise given that Venmo is owned by PayPal.

How Can I Invest in Cryptocurrency in a Retirement Account?

If you would like to use your retirement account money to invest in cryptocurrency, you have a few options. The first is a self-directed IRA or 401(k). Many providers offer this, either via an LLC (checkbook IRA or 401(k)) or through a partnership with an exchange like Gemini. You are literally buying the cryptocurrencies directly. Fees are variable.

If you do not have a self-directed IRA or 401(k) but have a brokerage window option (PCRA at Schwab or Brokeragelink at Fidelity, for example) you may be able to buy cryptocurrency-themed ETFs or trusts. The ETFs (BITO and BTF) tend to invest in Bitcoin futures, not the cryptocurrency itself. Expense ratios are about 0.95%. GBTC is technically not an ETF but a closed-end trust. The expense ratio is 2%, and it trades at a 14% discount these days.

How Much of a Portfolio Should Go into Cryptocurrency?

Most people are only going to dabble in cryptocurrency. If that's the case with you, then keep it to a play-money amount. A few hundred, or a few thousand maybe, certainly well less than 5% of your portfolio. If you're a true believer in cryptocurrency as an asset class, then put your money where your mouth is. If I believe in an asset class for the long run, I put at least 5% of my portfolio into it. But I don't put more than 25% of my portfolio into ANY asset class. My largest one is the US stock market at 25%. So, the amount you should invest is probably between 5%-25%. If you're putting 40% or 60% of your money into cryptocurrency, I think you're making a big mistake. It might pay off, but it's a bet you almost surely do not have to make to reach your goals. Look at the history of what has happened with various cryptocurrencies over the years. Drops of 50% happen every year. Drops of 90%-99% are not uncommon in any given cryptocurrency when it falls out of favor. It's hard to recover from something like that.

How I Would Speculate in Cryptocurrency

If I were actually going to speculate in cryptocurrency, I would recognize that this is primarily a short- to medium-term momentum play. Data over hundreds of years shows that the best way to time the market (if you must) is a simple moving average. When stocks are going up, they are likely to continue going up for a while. When they are going down, they are likely to continue going down for a while. The same is true with cryptocurrency. Don't expect logic to apply. There is no logic that will enable you to place a value on a cryptocurrency, anyway. This is about animal spirits and reading the crowd. When the crowd is just starting to rush into a cryptocurrency, that would be the time to buy. When your mother or co-workers ask you about it, that's the time to get out. 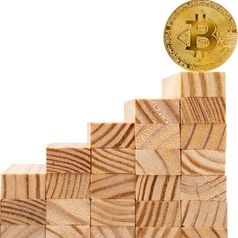 Personally, I would look for a combination of a new technology—maybe a new generation of cryptocurrencies—combined with popularity, buzz, and a rapidly rising price. If it is not yet in the top-10 or top-20 by market capitalization, it's probably too soon. There are lots of great ideas out there that just never became popular. You have to know the tech and the investor behavior pieces and combine the two. Diversification, of course, still applies. Three to five different cryptos seem about right to me. And none of them should be a stablecoin (a cryptocurrency that tethers its price to something that is more stable, such as the US dollar). There are plenty of dollar-denominated assets to invest in, but that's not why you're in the crypto speculating market!

Finally, recognize that this is just speculation. Sometimes you guess wrong. Don't beat yourself up about it and certainly don't risk money you cannot afford to lose without affecting your financial life. Good luck!

How Do I Know When to Sell a Cryptocurrency?

There are three things to watch. The first is a dropping price. Not a price that has dropped. A price that is just starting to drop. That's hard to identify, of course. You don't want to be whipsawed, but this is still mostly about momentum and animal spirits—not cold, hard numbers and value-style investing.

The second is when it becomes obvious that the cryptocurrency is not going to be a long-term winner. For example, it seems very obvious to me that Bitcoin is not going to be the long-term winner in the crypto space. It's too slow and too energy-intensive and does not have the functionality of later-generation cryptocurrencies. It may still be going up in price but not as much as the better cryptos are. It's going to lose eventually, so I'd get rid of it. Ethereum is doing its best to adapt to the changing environment around it. I don't think I'd necessarily drop that one yet. But you've got to be paying attention to something like a Solana or Avalanche.

The third is when you've made a killing. If you jumped in on the ground floor of Shiba Inu and it has gone up 240X, it's time to sell. It was fun while it lasted, but that old Wall Street adage—pigs make money but hogs get slaughtered—seems to apply. The problem is the diamond hands that allow an investor to hang on until something 240Xs are the same ones that keep that investor from selling before it tanks.

That said, I'm not going to put any of my money into cryptocurrency. It's simply too volatile, and there's no need, at this point in my life, for me to take on this kind of risk. But if you want to invest as smartly as one could invest in cryptocurrency, there's certainly a path to do so.

Which has been the most convenient (or most profitable) way for you to invest in cryptocurrency? Have you done it in some other way that's not listed here? Comment below!