One of the most important new technologies of the 21st century is the concept of a blockchain. The blockchain is the decentralized ledger that keeps track of cryptocurrency transactions. This typically occurs across a linked network of multiple computers, or nodes. The idea is that the record on the blockchain is very difficult to change, hack, or steal. There are lots of other uses for a blockchain besides keeping track of cryptocurrency transactions, and people are coming up with more all the time. Wrapping your head around what a blockchain actually is can be difficult.

For this post, though, let's talk about a blockchain, what it actually is, and how it works.

How Does Blockchain Work?

Consider the name—blockchain. While it is technically a software protocol, think of it as a chain of blocks, meaning each block is chained to the one before it and the one after it. The first block in a chain is called a genesis block. Each block contains certain information—for example, the digital address of the buyer, the digital address of the seller, and the amount of cryptocurrency transacted. Each block in the chain is timestamped so that it cannot be tampered with. Once recorded on the blockchain, it is very difficult to change that record. Thus, a blockchain can be used to securely transfer and keep track of the ownership of money, property, and contracts.

Occasionally the developers or users of a blockchain have a need to make some changes to a network protocol. This is usually done to improve security, but it can also be done to add new functionality or to improve performance. These changes sometimes result in a split of the blockchain where some miners choose to follow the new protocol and others continue with the older protocol. This is called a “hard fork.” When the changes do not result in a split because all of the miners/nodes adopt the new protocol, it is called a “soft fork.” Soft forks usually result from minor protocol changes and hard forks from major protocol changes. Hard forks can often result in entirely new cryptocurrencies.

The second feature is called “proof of work.” This helps protect against someone using high-speed computers to recalculate all of the hashes after the tampered block. It slows down the creation of new blocks. Proof of work is a computational problem that must be solved to create a new block. The verification that the problem was solved correctly can be done very quickly, but the actual problem itself takes time. 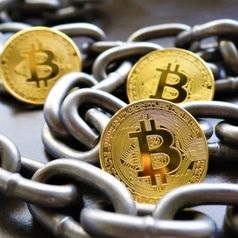 The third feature is the distributed peer-to-peer network that maintains the blockchain. Instead of having a single ledger in a single bank, each computer on the network—potentially thousands of computers—maintains the record. So, a hacker would have to change it on all of the computers, not just on one. These computers are referred to as nodes. Any computer can join the network, receiving a complete record of the blockchain to date. When a new block is created, all nodes get a record of it, and all nodes verify the chain to make sure it hasn't been hacked. They arrive at a consensus (majority rule) about which blocks are valid and which are not.

So, to hack the blockchain, you would have to:

It's just a really high threshold and produces a very high level of security. Blockchains can be public or private and can be used to record all kinds of things, not just cryptocurrency transactions.

Imagine that two people wish to do a transaction, such as purchasing a car. Instead of one of them going to a central authority (the bank) to get a cashier's check and then the other one going to a central authority (the bank) to cash the cashier's check, they go to an auditorium filled with accountants. Standing on the stage together, they announce “I, Joe, am giving Rudra this Bitcoin in exchange for his car.” The accountants all turn to the page for that particular Bitcoin in their ledgers and scribble down that Joe gave it to Rudra. The accountants in this example are the nodes. Each node keeps a separate record of the blockchain.

A cryptocurrency has its own blockchain. The individual units of that currency are called coins. A token is recorded on some other blockchain. It can have value, like a coin, or it may simply represent a contract, deed, or another asset. Think of the cryptocurrency as the native asset on a blockchain and tokens as guest assets.

What Is a Blockchain Smart Contract?

One of the best innovations with blockchains is the idea of a smart contract. A smart contract is simply a program that runs when certain predetermined conditions and terms are met. Instead of having to go to court to enforce a contract, the blockchain itself enforces the contract. It provides immediate certainty of the outcome without the loss of time and hassle. These contracts provide speed, efficiency, accuracy, trust, transparency, and savings. What's not to like? While they may initially require a programmer, that barrier is quickly falling. Home Depot uses smart contracts to rapidly resolve issues with vendors. There are tons of other hypothetical applications, such as ensuring election integrity, protecting medical data, and eliminating title defects when buying properties. Imagine saving all that money you have paid in your life for title insurance. It could be an obsolete product in a few years.

dApps, sometimes called dapps or DApps, are decentralized applications. dApps are similar to the regular applications you use on your phone or computer, except these have been deployed onto a blockchain. They are no longer owned by any one person, they are free from censorship, they are never down, and they are “plug-n-play.” They also have built-in payments, and they provide one anonymous login. The backend code of a dApp is simply a smart contract or multiple smart contracts. These smart contracts provide the app logic and the blockchain stores the data.

Now that you know all about blockchains and how they interact with cryptocurrency, perhaps you have a better idea of how safe it is to invest in cryptocurrency and how it compares with using currency in the traditional sense. Even though I won't be investing in cryptocurrency anytime soon, blockchain technology and the security it provides makes it just a little more appealing.

The only thing that overcomes hard luck is hard work.