Our first Roth IRA contributions (and really our first investment of money we had earned ourselves) took place in the spring of 2004. We put in the maximum—$3,000 apiece. We were both working and earning what we felt was good money (I was making $37,000 as an intern and Katie was teaching school), and we felt flush with cash. We had money coming out of our ears. So, we put $6,000 of it into Roth IRAs. We continued that good habit throughout the rest of residency and into our years of military service:

I don't have access to any statements from 2009, but I do have a spreadsheet tabulating net worth for each year. Keep in mind that I became an attending in 2006 and started contributing to the military 401(k) system known as the Thrift Savings Plan. I had also put a little bit of moonlighting money into a SEP IRA. But my spreadsheet tells me how much my investments actually earned during those years.

Lots of stuff happened to us in 2010. The first was that the Backdoor Roth IRA process became legal. As a good little Boglehead, I was aware of that, so early in 2010, we made our Roth IRA contributions via the Backdoor. I was coming out of the military that year and figured our income might be too high for direct contributions. It didn't turn out to be that way. But since anyone can do a Backdoor Roth IRA even if their income is too low to need it, it wasn't a big deal. But to avoid being pro-rated, I had to do something with that SEP IRA. So, I converted it to a Roth IRA, too. I wouldn't call that any sort of “Backdoor” process, since it was a fully taxable event.

While deployed in 2007-2008, I had made some after-tax Thrift Savings Plan contributions. Upon separating from the military in 2010, I isolated that basis and converted it to a Roth IRA, further boosting my Roth IRA balance. This was much more like a Backdoor Roth IRA—really a Mega Backdoor Roth IRA before anyone was calling it such.

We continued to do a Backdoor Roth IRA every year. It looked like this: 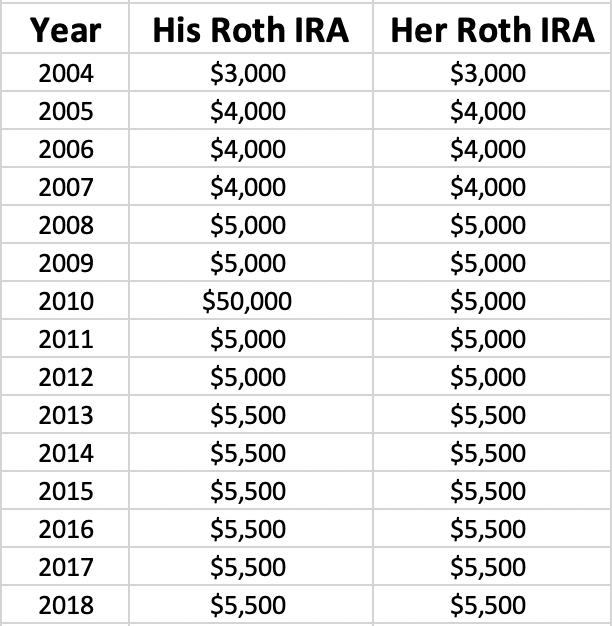 We were Roth IRA millionaires. Even cooler, 50% of the money in those Roth IRAs/401(k)s was money that our money has earned over the previous 18 years. 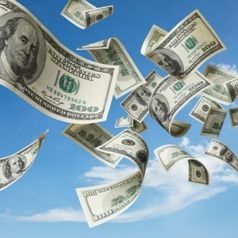 Slow and steady wins the race. But for the first decade or two of savings, brute force saving matters far more than your investment return. Focus on your income and savings rate, and the snowball will soon begin to roll faster than you ever imagined.

What do you think? How long have you been doing Backdoor Roth IRAs? How much do you have in your Roth IRAs and 401(k)s? What is your ratio of Roth to tax-deferred retirement assets? Comment below!

Why should I double check anything when I have you? I get the same totals as you on the charge. The difference, $19,500, was the 401(k) contribution limit for a while. I don’t have the original spreadsheet I did this with so I’m not sure if the spreadsheet is right or the total I used was right. Doesn’t really matter I suppose in the bigger picture.

My tax guy is not so much knowledgeable about it. Any suggestions for who to contact to set it up.

Thanks again for all you do. You have already saved me thousands by your expertise.

If you don’t get an employer match, you’ll be able to stash the full amount into the after-tax bucket. If you get a match, then that amount will be reduced by the match.

Thanks for the detailed answer. Appreciate it.

The 401(k)/SEP-IRA limit for those under 50 is $61K total between employee and employer contributions. How much of that will be MBDR contributions depends on the plan structure.

The Backdoor Roth IRA is easy to do anywhere. See these posts:

As far as a Mega Backdoor Roth IRA, it’ll need to go through your employer. Your current plan may not allow it.

I agree that (Backdoor) Roth IRAs are worth it, especially if it’s a choice between that and a taxable account. But it’s pretty obvious from your numbers that if you consider only your small yearly Roth contributions, you’d be nowhere close to being a Roth millionaire. And this goes double for a single person. Don’t think you’d get there in a few more years either, even as a couple. So I think the message is: If you want to be a millionaire, you’ve got to do more than just a yearly Roth IRA contribution.

Just need more time, but I agree with your overall point that saving $12K a year isn’t enough for the typical reader of this post.

I started my career as a nurse in 1987, putting about 2k in my retirement for 2 years. I then rolled that over to an IRA when I became a contract nurse. I put in max to IRA till we didn’t qualify any more, and in 1998, when my husband had a lower income year, I rolled it all over to a ROTH. For many years I didn’t add anymore as we didn’t qualify, until I learned about Back door Roth. I’ve been putting in the max since then, including the over 50 years old 1k more. As of 12/31/2021, before the stock market drop, I had 600k, just from Roth yearly maximums, even though there was a period of years I wasn’t allowed to fund at all. My husband did similar, but he also had some Roth Conversions from his R/O Traditional , so I’m not going to include him. But we together could easily be over 1 million if he had done the same as me. We are well over 1 million with his conversions. I know I had a lot in Vanguard Health Care at the beginning, and that was doing very good for awhile. So no, not close to 1 million for me, but 600k is a good amount for no more than a 7k per year deposit.

Wow! This is a totally new concept for me. I never knew you could transfer money from a regular IRA into a roth. Looks like it’s worth looking into more! Thank you!

Hmm but what about the gov’s attempt to stop all conversion of roth ira in the now-almost-certain-dead Build Back Better bill and possibly another separate bill like Secure 2.0 that may repeal backdoor IRA. Should we just wait for the end of the year or save/convert/invest our backdoor as if nothing will happen?

Can you share something about SECURE 2.0 and repealing backdoor Roth? I read a few articles about the proposals but didn’t see anything about disallowing Roth conversions. Much of what was written included expanding/simplifying options for retirement account access. Many citizen have likely performed their backdoor Roth process for 2022, it would be a mess to have to sort that out with retrograde rules. Any changes likely antegrade for 2023 if & when the ink is dry.

Why wait? It’s legal now. I wouldn’t waste time or money worrying about what “might” happen.

2) Could you explain how one qualifies for a MegaBackDoor Roth and how one does it?

1) I look at my entire asset allocation together as one big account across Roth IRAs, 401(k)s, and taxable account. Right now my Roth IRA is entirely the Vanguard REIT index fund and Katie’s is the Vanguard Small Cap Value Fund. But both of those funds are also held elsewhere because we can’t make up our entire allocation for either of them in a single Roth IRA.
2) More info here:

Fidelity has a little hack with some 401k plans which allows you to automatically convert your after tax 401k contributions to Roth 401k. I had to call to get it setup but it works out great.

It’s usually easy IF the plan allows it. That’s the key point.

I thought Fidelity does not offer a Roth 401K option in its Solo 401K plan(?)… Unless you are talking about non-Solo 401K plan?

Yes. Pretty much. Might need to isolate basis, but you can typically do that as you rollover-after tax and Roth to a Roth IRA and pre-tax to a traditional IRA or other 401(k).

Dr. Dahle, question regarding 403b plans. Recently the private group I worked for was taken over by a large non profit health care system. In researching the 403b, it has no after tax contribution ability, so no chance in doing a Mega Backdoor Roth. My question, should I try to go to the trouble to get this after tax option in the plan, and inservice Roth conversion and/or in service out of plan rollovers. Do others in my situation actually have this option in their non profit system 403B, or is this just a pipe dream? Not going to upset the apple cart if no one else has this option. Thank you.

Not sure I’ve seen one in a 403b before. Doesn’t mean it couldn’t happen though. Chances of you getting changes in a large non profit health care system 401k are low anyway.

Second, no, an employer can put your entire salary into a 401(k) as a match.

The price of anything is the amount of life you exchange for it.