A famous football coach once said, “You’re never as good as you think you are when you win, and you’re never as bad as you feel when you lose.”  Investors should modify that quote just a little bit to help them maintain perspective and stay the course with their investing plan.

It is the natural tendency of an investor to assume that his account balances are what he really owns.  Aside from the fact that the government owns some as-yet-unclear portion of your tax-deferred accounts, this is a very misleading attitude that leads to poor financial decisions.  The “wealth effect” is well-known.  People spend more after a run-up in stocks and real estate prices.  At its worst, people use their home equity as ATMs, pulling it out to spend it on consumer items.  This is a behavioral error you should work hard to avoid.

Bull Markets And The Wealth Effect

Assuming a long-term investment horizon, the reality is that near bull market tops you have lower expected future returns or less money in the account than you think you have (same thing really for a long-term investor).   Don’t spend too much time congratulating yourself on your investment acumen and counting your wealth.  A good percentage of it, perhaps even half of the money you have invested in risky assets, is almost surely going to disappear at some point in the next 5 years.

An even worse tendency on the bull market side is the idea that your account balances have gone up dramatically in the last few years because you’re a brilliant investor. As John F. Kennedy said (admittedly in a different context) a rising tide lifts all boats.  Over the last 5 years, you could have bought just about any asset and done great.  US Stocks are up 19% a year, International Stocks are up 12% a year, Large Growth Stocks are up 20% a year, Small Value Stocks are up 20% a year, and REITs are up 17% a year.  Even recent losers like Emerging Markets (up 14% a year), Nominal Bonds (4% a year), TIPS (5% a year), and Gold (7%).  Heck, even home prices are up 1% a year for the last 5 years, and that includes an 18% drop in the first two of those five years.  Meanwhile, inflation has been very low at 1.6% the last five years, so the vast majority of those exceptional returns have been real, after-inflation returns.

Selling Out At Market Lows

Lots of investors, including many physicians I know, sold out at the market lows of 2008-2009.  They looked at their recent losses and compared their balances to how much they used to have and how much they needed in retirement and decided they could not afford to lose anymore.  Perhaps if they remembered that they really didn’t have as much as they thought they had in early 2008, nor as little as they thought they had in March 2009, they would not have done so. 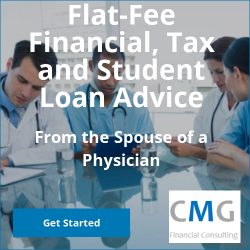 I think it is okay to play around on the edges, perhaps a 5% variation in your stock to bond ratio, perhaps putting a little more money into paying down debt and a little less into your investment portfolio, perhaps rebalancing a little more often etc, but realize that these little moves are probably just as likely to cause you to lose money as to gain it.  Don’t believe me?  Write down the little changes you make and the reasons you made them and go back in a year or two and see how clear your crystal ball was.  It might satisfy an urge to tinker, however.  Better to make little mistakes than big ones. The reason that market timing is so difficult is that not only do you have to figure out what will happen in the future, but you also have to time two events at least relatively successfully- an exit and an entrance.  This is surprisingly hard, even for an unemotional Spock, but add in some of the emotional effects caused by greed and fear and it is nearly impossible.  As John Bogle said about market timing,

So what should the investor do?  The same thing he always does.  Stay the course.  If you’re still a decade or more away from retirement, just stick to your plan.  Keep your 60% (or whatever) stocks in bull markets and in bear markets.  Don’t get greedy and abandon bonds, especially out of an irrational fear of some bond bear market.  Do not start spending more or buy a bigger house because your balances seem large.  Remember a significant chunk of your investment account isn’t really there.
If you are very near retirement (at the point where a bear market in the next 5 years would cause you to have to work longer), take a look at your need to take risk.  Perhaps this recent run-up has put you into a position where you no longer need 8% returns to meet your goals.  If you no longer have a big need to take risk, perhaps this is one of those times to dial back the risk in your portfolio a bit.  Pay off your mortgage and student loans with your new contributions.  Those returns are guaranteed no matter what the stock and bond markets do.  Donate appreciated shares to charity; even if the market goes down later you will still get the full tax deduction, and in the meantime, your money can do some good in the world.
What do you think?  What have you done to combat the wealth effect in bull markets and in bear markets?  Comment below!

I think it’s difficult to see the gains and not also want to set aside a portion of the large gains to reinvest when we have a major correction (and is that 10% or 40% decline). How do others reap some of their recent 80% gains on new investments since 2009 and have “dry gunpowder” as Warren Buffett does. What is the right amount to set aside for jumping in during the next recession?

The whole “dry gunpowder” philosophy of investing smacks of market timing. Of course you want dry powder after a correction. But getting your dry powder, if you time it wrong, may mean missing out on the end of the bull market. Plus, you may miss the beginning of the next one. Or you may throw your dry powder in too soon. It’s just another name for market timing. If your need to take risk has changed, that’s one thing. But that’s not what people generally are thinking about when they talk about dry powder. Besides, if you have a balanced asset allocation with some bonds in it, that’s where your dry powder is. You can’t have dry powder for free. There is a cost to it.

Warren Buffett carries lots of cash. That costs him in a bull market. And at least in the last couple of decades, hasn’t worked out very well for him compared to staying fully invested. He knows exactly how hard it is to beat the market, thus the reason he chose the market over a collection of hedge funds a few years ago in a bet. (and he’s winning handily.)

If you want to do “dry powder”, ask yourself if you’re as good as Warren Buffett. Because if not, there are precious few who have done this successfully.

I have followed this philosophy for over 20 years of investing. I don’t think of it as market timing at all. When equities get ahead of my 60% allocation, I prune them back and exchange the proceeds into my fixed income, laddered bond portfolio. I have followed the opposite strategy also, moving funds from fixed income into equity funds during bad times.

This is not NOT market timing at all. By following this prudently, utilizing Vanguard funds, this has allowed me to accumulate well over 7 million dollars thus far.

Thanks for sharing your success story.

“Stay the course. If you’re still a decade or more away from retirement, just stick to your plan. Keep your 60% (or whatever) stocks in bull markets and in bear markets. Don’t get greedy and abandon bonds, especially out of an irrational fear of some bond bear market. Do not start spending more or buy a bigger house because your balances seem large. Remember a significant chunk of your investment account isn’t really there.”

If only more docs would follow this advice. “Seem” is the key word and rarely understood.

Thanks for all you do!

No comment on the above article. I would just like to say thanks for picking a captcha code supplier that I can actually read !! Some other sites I cycle 3 or 4 times before I get one I can read.

I wish it was helping a little more. Apparently the spammers can read it too.

“Attack”: if you had to choose only one book to read about investing and building wealth, I would recommend Nick Murray’s “Simple Wealth, Inevitable Wealth”. You can find outdated versions on Amazon, but you’ll have to go to his website if you want the most current version (although I still keep an old copy myself). We follow his policies strictly in our practice and I would say that changing to this strategy was the best decision we ever made. I have no financial incentive in this recommendation, but I do enjoy helping people understand how to be successful long-term investors. We give this book to all clients, if they promise to read (it’s not cheap) and once they “get it”, we really don’t have to worry about behavior in bear or bull markets (bull markets are at least as dangerous as bears, imho). It’s a pretty easy read. Good luck with saving for retirement!

"You are engaged in a life-and-death struggle with the financial services industry. ... If you act on the assumption that every broker, insurance salesman ... and financial advisor you encounter is a hardened criminal, you will do just fine."