[Editor’s Note: This guest post was submitted by student loan expert, financial advisor, and skier Daniel Wrenne, CFP CLU, ChFC, CFP. Rumors about me leading Daniel over a cliff while skiing together in Utah could be true. Wrenne Financial Planning is a long-time advertiser on this site. Today’s post involves the government student loan programs and specifically when the Pay As Your Earn (PAYE) program may or may not make sense.]

It’s been said many times that with Public Service Loan Forgiveness “PSLF”, the Pay As You Earn “PAYE” repayment plan always works best.  In fact, many consider it a rule of thumb.  But did you know that using this rule of thumb could cost you over $60,000?  I am writing this to share with you a sneaky exception to the rule that you should know about.

So that we are all on the same page, let me clarify the rule of thumb I’m talking about.  Here is the logic.  PAYE and RePAYE are very similar.  Both are income-based.  Both qualify for PSLF.  Both set your payment at 10% of discretionary income.  However, PAYE has a couple of major advantages over RePAYE that swing the pendulum in its favor.

The only big advantage RePAYE has over PAYE is the unpaid interest subsidy.  However, if you’re going for PSLF, interest is typically irrelevant.

Given these facts, it would make sense for everyone going for PSLF to use PAYE because it has everything RePAYE has plus more, right?  That’s the rule of thumb.  And it works well…  most of the time.  But not always!  Before we talk about the exception to this rule, let’s make sure the RePAYE and PAYE math is clear.

Here is the actual formula:

Let’s see how this works for John.  John is an in-practice pediatrician making $150,000 per year (AGI), has $150,000 in federal student loans, is going for PSLF and is currently in PAYE.  He wants to make sure this is still the best option and is comparing repayment plans.  For simple math, let’s assume that based on his situation, 1.5 x poverty threshold is $20,000.  (The actual number depends on your family size, current year poverty guidelines and sometimes the state you live in.)

Here is the math for John:

John assumes that because the formula is the same for RePAYE and PAYE his payment will also be the same under both.  But when he runs the numbers using the federal student aid calculator, he finds this is far from true.  The RePAYE payment is $4,500/yr and PAYE is $13,000/yr.  His PAYE payment makes sense.  But what’s up with the RePAYE numbers?

Oh, I forgot to tell you.  John is married to a resident physician earning $50,000 (AGI).  His wife, Janet, is also going for PSLF and owes $450,000.  She is set up with PAYE as well and they have been filing taxes as married filing separately “MFS”.  So, under PAYE, her situation has no effect on his payment calculation.  But with RePAYE, it totally changes the formula. 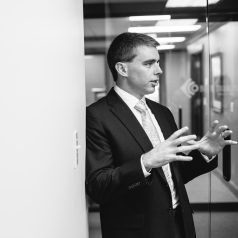 RePAYE (and PAYE filing jointly) repayment plans force you to include your spouse’s income and loans.  They calculate your payment as if you have one combined household income and one big joint student loan.  And then they split the household payment up proportionate to each borrower’s percentage of the total debt.  Keep in mind that the PAYE payment is capped at the 10-year standard payment and the RePAYE payment has no cap.

Now that the math is clear, let’s look at Janet’s PAYE and RePAYE payments.

The key for couples that intend to stay married is they must look at all the household total payment scenarios.  In order to figure all the scenarios, they must run all individual combinations and add them together to come up with the total household payment.  Here are their household total numbers for the two scenarios we’ve talked about so far:

The Exception to the PAYE Rule

Most people get this far and they end up selecting PAYE for both because it gives them the option to file separately and cap payments.  But what if they don’t use the same repayment plan?

That’s no good.  You can see how someone could really mess this up if they’re not clear on how the formulas work or get led astray by an ignorant loan servicer.

Confusing right?  Student loans today are totally counterintuitive.  Do the math yourself and work through the logic.  It seems like some people get the whole income-based part of all this.  But they’re missing how the spousal debt ratios play into it.

Student loans today are totally counterintuitive.  Do the math yourself and work through the logic.  It seems like some people get the whole income-based part of all this.  But they’re missing how the spousal debt ratios play into it. — Daniel Wrenne

Curious how the numbers play out from now until PSLF?  Here are our projections for the various scenarios over the next 10 years.  Keep in mind, these numbers are based on the actual poverty guidelines, therefore, the year 1 payments will differ slightly from our round numbers example above.  You can see all the assumptions we used at the end of the post. 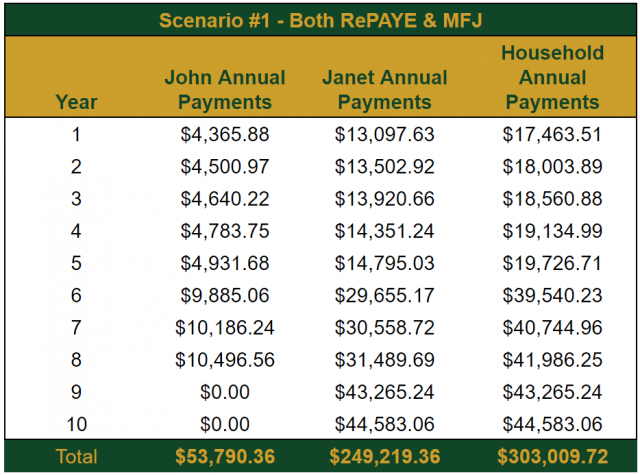 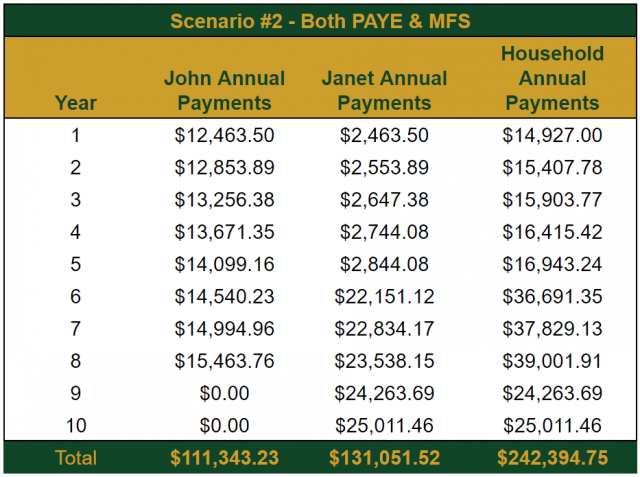 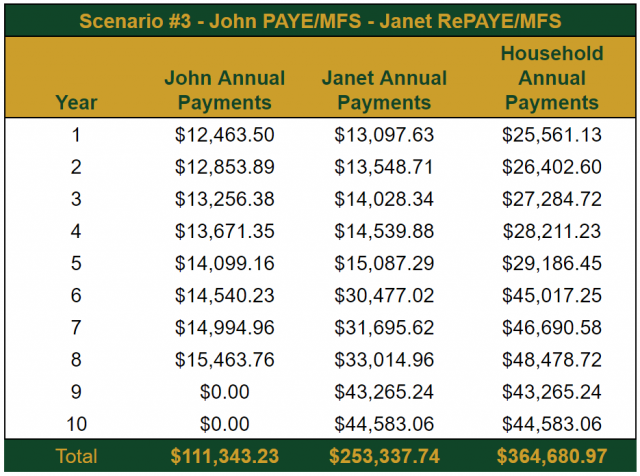 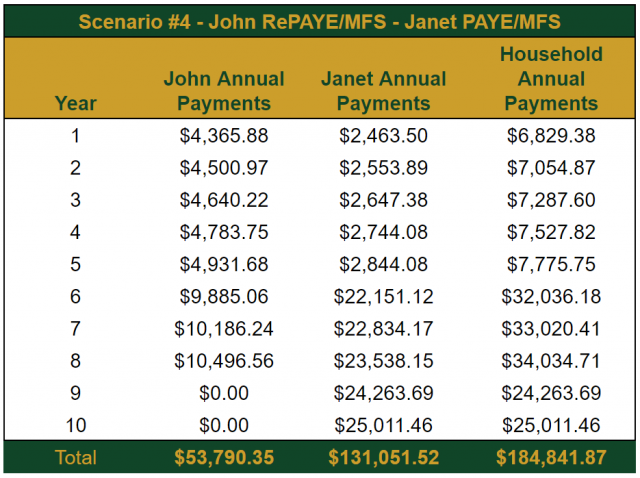 As you can see from these projections, there is a lot at stake!  The swing in total payments with their current plan and the best plan is over $60,000.  And the swing in the worst and best scenarios is just under $190,000 (minus the tax costs of filing separately instead of jointly)!

In order to run these projections, we had to make several assumptions.

Please be advised that this article is for informational purposes only.  All information and ideas should be discussed in detail with an advisor, accountant or legal counsel prior to implementation.

[Editor’s Note: Interesting little twist huh? Every time I find one of these I wonder how things always get more complicated when the government gets involved. If you need some help running the numbers, check out our recommended advisor page and our recommended student loan specialist page here. If you’re an attending already (and maybe even if you’re still a resident) and not going for forgiveness, or if you’re a resident with private loans, you need to refinance those suckers. Rates are at historic lows and even if you refinanced just a few months ago, it’s probably time to do it again. Use the WCI negotiated deals below to support this site, save thousands in interest, and even get a few hundreds bucks cash back, all for just a few minutes of work. If you haven’t done it yet, it’s probably the best-paying thing you’ll do today, even if you’re a spine surgeon.]

What do you think? Are you married to another earner and trying to figure out which IDR to use? Which program did you end up in? Comment below! 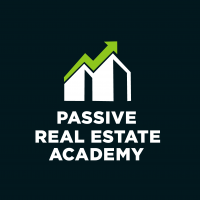 Every year as a dual resident couple I ran the REPAYE/PAYE numbers and they always came out about the same so I hedged with REPAYE for the subsidy. But now that I am an attending and my wife is still a resident I reran everything after reading this and we save $500 a month on student loan payments. Fantastic article!

This is most interesting twist in student loan management that I’ve seen since finding out you can bypass the grace period by consolidating. Thank you very much for this intriguing and useful tip Daniel!

Thanks Jessie. Glad it was helpful.

Of course, you need to make sure you even qualify for PAYE before you start down this whole path. You need to have borrowed your first federal student loan after October 2007, and you need to have borrowed a Direct Loan after October 2011. Wife and I went all the way through the process of getting changed from IBR to PAYE only to realize her first loan was issued prior to these dates. Caused us to miss out on a couple months of eligible PSLF payments while FedLoan figured this out and put us back in IBR.

Great article since I will soon be in this dilemma! My only question is can we file our taxes jointly and not consolidate our loans, in order for REPAYE to account for my future spouses loans for repayment ?

Will you come out ahead doing so? One would have to run the numbers. I think I’d send you to a specialist to answer that one. My guess is that REPAYE accounts for your combined income and your combined loans no matter how you file or whether or not you consolidate. Confirm that with a pro before making a major decision based on that info. You might find that one of you in PAYE and one in REPAYE is the right answer for your situation for instance.

Great article! Thanks for your help!

I just started an academic position and am going for PSLF with about $350k in government loans ($300k principal, $50k interest) with an average interest rate of 6.7%. My wife has about $90k in loans (nearly all principal) with an average interest rate of 6.1%. I’m considering switching from IBR to PAYE (all my loans came after 2009) and filing taxes separately. Would refinancing my wife’s loans to a lower interest rate with a private servicer (she’s not going for PSLF) change MY payments at all if we file as married but separate?

Thanks in advance for the help, really appreciate the content you both put out regularly!

Not if you file separately. I’d refinance hers.

Wouldn’t the benefit of this strategy be offset by the tax consequences? MFJ is especially beneficial when there is such a large discrepancy between spouses incomes.

Would this work the same in a community property state as long as you use pay stubs instead of tax forms to determine income?

I suppose I mean the general number crunching in this post.

You’re going to have to get more specific or perhaps shoot an email to the author because I’m not really sure what you’re asking.

Thank you for the article. I just graduated medical school with 390K in Loans with averaged interests loan 6.5%. I am single and no kids. I want to apply for PSLF. I would like to know which plan PAYE or REPAY would be better. My goals are the lowest monthly plan and lowest amount payed at the end of 20 or 25 years. I see myself getting married and kids in the future. I also would like a back up plan if PSLF is not around in 10 years. Any help would be appreciate it. Thank you!

Why would you have loans for 20-25 years if you’re going for PSLF? You should have your loans forgiven in 10. REPAYE is the plan for you for your federal loans if you are single and going for PSLF.

There are no free volatility-reducing lunches that will inexpensively reduce your portfolio risk, and there is no risk fairy to insure the risky parts of your portfolio on the cheap. Yes, there are people who—and vehicles that—will do this for you, but they will cost you a pretty penny.