[My monthly column in Physician's Money Digest addresses a question I see all over the internet these days- what to do about the fact that interest rates just went up a little bit, and will almost surely rise at least a little more in the near future.] 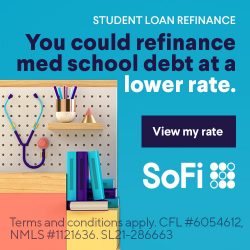 On Dec. 16, the Fed raised their key “Federal Funds Rate” (the rate at which banks lend to each other overnight) from a range of 0% to 0.25% to 0.25% to 0.5%. It appears clear that if economic conditions allow, they will continue to slowly raise rates over the next couple of years. Many investors are wondering what they should do (if anything) about all of this. Proposed ideas range from reasonable to apocalyptic. However, a bit of humility with regards to your ability to predict future economic events will go a long way. Let’s first discuss a few things to do about this rise in interest rates and then a list of things not to do.

Enjoy Making Something On Cash

In 2007, I earned over 5% nearly risk-free in a money market fund. For the last five years, that same fund has a had a return of essentially 0% per year. I eventually abandoned it in favor of a high-yield online savings account paying 1%, still well less than the rate of inflation. Personally, I am looking forward to having my cash savings at least keep up with inflation again.

Not everyone is hurt by rising interest rates. If you have no need to take on additional debt, this is mostly a favorable economic condition. Anybody who has obtained a fixed rate mortgage in the last five years may soon be earning more on their savings than they are paying the bank to borrow. Unless you have variable rate loans or need to take out loans in the future, there is little downside to rising rates. Even if you still have need to borrow in your future, mortgage rates will need to rise 5% just to get back to the rate at which I took out my first mortgage in 1999. We’re a long way from there.

Refinance If You Haven’t Already

If you do have some higher interest rate debt that you could refinance, now is the time to do so. This includes both mortgages and student loans. Since 2013 it has become possible for physicians to refinance their student loans again. In fact, starting in 2015, even residents can refinance their loans while enjoying lower payments than government programs offer during their training. If you do not expect the loans to be forgiven or paid off by someone else, why not refinance now and lower the cost of that debt? Likewise, if you have been dragging your feet on refinancing your mortgage, now is the time. Even after the Fed’s announcement, it is still possible to get a 15 year fixed mortgage under 3% and a 30 year fixed mortgage under 3.5%, both essentially historical lows.

Now, let’s talk about a few things you should not do.

While it is nice to have a fixed rate on your mortgage or student loans, bear in mind that there is often an advantage to a variable rate. When you take out a fixed mortgage, you are in effect paying an insurance premium against rising rates. As a general rule, you should only buy insurance for financial catastrophes, and self-insure everything else. If a rise in interest rates would not be a financial catastrophe to you personally, it is reasonable to run that risk yourself. For the last several decades, those who have used variable rate loans have been rewarded for that taking that risk. For example, if you can refinance your student loans to a fixed rate of 4% or a variable rate of 2%, interest rates not only have to rise for you to lose, but they have to rise over 2% AND they have to do so quickly, before you’ve paid off most of the loan. Variable rate loans not only outperform in a time of stable interest rates and a time of falling interest rates, but can also outperform in a time of slowly rising interest rates. Only if rates rise dramatically and quickly do fixed loans outperform. If you expect to pay off loans in less than five years, and can afford to make the payments should they unexpectedly rise quickly and dramatically, there is no need to pay that extra “premium” to get a fixed rate.

Don’t Panic About Your Bonds

Many investors are panicking about their fixed income investments. As interest rates rise, the value of bonds generally falls and vice versa. However, over the long term, fixed income investors benefit from higher rates. Duration is a financial term that tells you how long it will take for a bond investor to break even after a rise in bond rates. For example, an intermediate term bond fund may have a duration of five years. If rates rapidly rise 2%, a holder of that bond fund should expect to lose 10% of the value of those bonds. However, the bond fund would then pay a 2% higher interest rate. In five years, the investor would have made up his losses and the rest is gravy. So unless your investment horizon is less than five years, a rise in interest rates is beneficial.

Don’t Pretend You Can Predict the Future

Some investors have chosen to keep the duration of their fixed income holdings very short over the last five to eight years. Thus far, they have not been rewarded for that decision. Over the last five years, the Vanguard Long-Term Treasury fund has had returns of 6.78% per year, while a similar intermediate term fund has made 2.56%, and the short term fund made 0.74%. It’s difficult to make predictions, especially about the future. While a consensus of economists expects rates to go up something like 1-2% over the next one to two years, their track record is less than reassuring. Besides, this expectation is already priced into the bond market. If you expect to profit by changing from long-term bonds to short-term bonds just before interest rate rises, and then switch back, you’ll need to get the timing right not once, but twice. That will require you to know more than the market does, which can be a very difficult task. I would instead recommend you write down a fixed asset allocation and stick with it for the long-term. When interest rates fall, be grateful that the value of your bonds went up. When interest rates rise, be grateful that future expected returns from those bonds will be higher.

Perhaps the greatest error investors make out of fear of rising interest rates is to make dramatic portfolio changes. Classically, rising interest rates have meant lower returns for stocks. However, that correlation can be very low. In fact, since 1998, rising bond yields have been correlated with HIGHER returns for stocks. Classically, rising interest rates are also bad for gold and other precious metals, since there is higher opportunity cost to hold them. However, the price of gold has fallen 41% since 2011, without any increase in interest rates. Perhaps the effect of rising interest rates is already “priced in.” Even with Real Estate Investment Trusts (REITs), highly leveraged companies considered quite sensitive to interest rates, it turns out that correlation between rate changes and returns is much higher in the short term than the long term. In short, it is far better to hold a diversified set of assets that is likely to perform well in any future economic environment than to make large bets dependent on your ability to predict the future.

Thanks to recent action at the Fed, general interest rates are likely to rise over the next two years. Following a well-thought-out long-term financial plan will keep you from panicking or making moves you will later regret.

Have you changed anything due to the prospect of rising interest rates? Why or why not? Comment below!

The world loves to panic about everything for some reason. I suspect it is all of the time CNBC has to fill the air. Drama is necessary to keep people watching.

I have also heard that there is a strong, general cognitive bias towards more heavily weighing bad news over good news. That is why everyone thinks the world is “going to hell in a hand basket” yet for the most part things are generally better now than they were 40 years ago from a general-needs-being-fulfilled standpoint. Don’t let your 80 year old, grumpy father/grandfather tell you otherwise.

The raising interest rates are a sign that the fed, which is somewhat influenced by research by economist, thinks the economy is healthy enough to withstand a little negative pressure. If crisis occurs when interests rate are already zero, that is going to be a much worse crisis because there is little the fed can do besides creating additional money, which is theoretically unsustainable.

You cannot control what you do not know
5-7 yrs ago everyone wS predicting rates could not go any lower and they did
I was buying 10yr CDs fir 5% and very spy
Just buy short, inter, long bond funds or total bond funds or munis
Turn off the tv no one knows more than the fly on the wall

This is where having a solid, written investing plan based on well thought out ideas is very helpful – like the link at the end of this post to the other post about personal investing statement. If you have done that, then you are okay with interest rate changes, markets fluctuating, and any such things that happen in the marketplace. When JP Morgan was asked to predict the future of the stock market, he said, “It will fluctuate”. Jumpiness with money at these times is a guarantee to die poor.

Nope, haven’t and won’t change anything for the reasons listed in your article. Interest rates don’t rise in a vacuum.

Also, as a Canadian doing business and investing in the US, rising interest rates should strengthen the US dollar.

For my rental properties there’s enough of a cash-flow barrier to handle interest rates rising a couple percent. Plus rising rates indicate a healthy economy, which at least theoretically, should be good for the rental market.

Are your properties on a variable rate mortgage or something?

Rates are finally trickling back up, and I’m still sitting with my variable rate student loan.

The refinance-to-fixed idea has definitely crossed my mind, but the interest rate penalty going to fixed is huge… the “insurance premium” analogy is very true, you are absolutely paying for that fixed rate.

With all the volatility in the markets, the projected rate rise is not even a given, may face delays, or even another slight cut. However, even if the rates continue at full trickle, it’ll be a couple years before you’re at what the fixed rate is today. And even then, it’ll have even longer to go to hit the federal 6.8% that we were paying to begin with. Luckily we have the cash flow to pay aggressively should rates take some unexpected drastic turn.

Wealth is the ability to fully experience life.