One of the investment books that most impacted me was William Bernstein's 4 Pillars of Investing.  One of his pillars was understanding market history.  He introduced the subject like this:

“It is a fact that, from time to time, the markets and investing public go barking mad.  Of course, the madness is obvious only in retrospect.  But a study of previous manias and crashes will give you at least a fighting chance of recognizing when asset prices have become absurdly expensive and risky and when the have become too depressed and cheap to pass up.  The simplest way of separating managers who would be suckered into the dot-com mania from those who would not would be to administer a brief quiz on the 1929 crash….

What separates the “hard” sciences of physics, engineering, electronics, or aeronautics from the “social” sciences is that in finance…apparently similar systems will behave very differently over time.

Along this line, it has been odd for me to see some minor panicking both online and in person among physician investors this May and June when the US stock market declined slightly.  Granted, the international markets were declining even more and bonds were also losing money as interest rates rose, but the amount of the decline was quite minor, historically speaking.

The Market Will Fluctuate

Michael Zhuang, an investment adviser who sends me his free email newsletter occasionally, had his intern actually add up all the market declines in history to determine how frequently they occurred.  The graph produced from the “study” was very illuminating and really puts things into perspective. 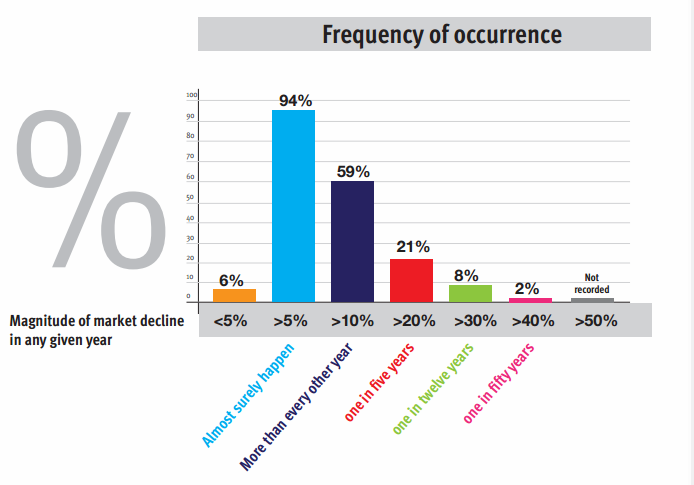 As you can see, declines such as our recent 5% drop occur in 19 out of every 20 years.  It's not only completely within the realm of the possible, but it should actually be expected by any reasonable student of market history.  In fact, any reasonable investor would expect a market decline of 10% or more most years.  A 20% decline, a widely used definition of a bear market, happens more than once out of every 5 years.

Now, there's no rule that says the future has to resemble the past, but understanding the past is certainly helpful in interpreting future market events, and most importantly, preventing you from doing anything stupid because of them.

I started investing when I was 10 years old. The most important lessons I’ve learned are: you can’t outperform the market with stock picking or timing the market, and the time value of money. I have done better and spent less time on managing my investments now that I invest regularly and forget about what is going on with market volatility–I’m happy with the increased value of my portfolio when the market goes up, but I’m also happy when the market tanks because my regularly scheduled investing is buying low. I agree with what WCI is constantly preaching: index, start early, live frugally to save more/need less.

I think the disconnect is that the chart is diplaying overall yearly declines while ignoring single day drops. At least that’s what I’m assuming from the wikipedia article on the bear market of 2007-2009.

This is one of the reasons to not watch/manage your portfolio. Unless you do this for a living it gets easy to act emotionally to the normal swings in the market.

So I am wondering if a graph of % market increase would yield identical results? What do you think?

It would definitely have a lot of variation, but I don’t think it would be identical.

The question isn't at what age I want to retire, it's at what income.