This 2022 bear market has been a bit distressing for me to watch, although perhaps not for the reasons you think. Yes, stocks are down more than 20% while bonds have provided little refuge, most falling by more than 10% as interest rates rise dramatically. Real estate markets are rapidly slowing as the cost of leverage increases with that rise in rates, and many alternatives are cratering.

As I write this, NFTs are down 90%, altcoins are down over 70%, and even the mighty Bitcoin is down over 60%. This is my fifth bear market, and my seven-figure loss (so far) is many multiples of what I lost in my first bear market in 2008 ($78,000). But no, I am feeling zero panic or the desire to sell low. I've seen this movie before, and I know how it ends. That isn't the reason I'm feeling distressed.

J.P. Morgan might have said, “In a bear market, stocks return to their rightful owners.” That means a few different things, depending on who you ask. Some say it means stock ownership becomes more concentrated among the wealthy during bear markets, and that is probably true. The wealthy are those with unimpaired capital that can be used to swoop in and purchase stocks and other assets at bargain-basement prices. The less well-to-do cannot afford to think about the future as much, so they liquidate assets that were supposed to be for retirement to make the rent or mortgage and to keep the wolf from the door.

However, I think it is also a behavioral observation. Simply put, stock ownership moves from those with weak hands to those with strong hands (or in the words of the Crypto Bros and Wall Street Betters, “Diamond Hands” 💎🙌💎🙌💎🙌). Frankly, those who panic in a downturn and sell their stocks low don't deserve to earn those high long-term stock returns. They will be forever buying high and selling low.

But it's really hard to watch it happen in people you care about. Let me give you a couple of examples.

Colleagues often come to me and ask me to help them select investments in their 401(k). I spend a lot of time encouraging them to invest more in those retirement accounts, but I also teach them the basics of investing, particularly on how to use a low-cost, broadly diversified, appropriately risky, static asset allocation to reach their goals. I also spend a lot of time emphasizing how they will go through a bear market every 2-4 years and that 20%-50% of the money they have invested in stocks is going to disappear.

And that at that moment, just like the name on the front of the jersey matters a whole lot more than the name on the back, the investor will matter a whole lot more than the investment. I emphasize just how critical it is that they do not panic-sell in those moments. They generally walk away with a diversified mix of stock and bond index funds with something like a 60%-80% stock allocation depending on what they tell me about their past investing behavior and future expected behavior. So, you can imagine the pain it causes me to hear that another colleague sold low in the bear market. These are generally five-figure portfolios, so every dollar matters and a permanent loss of capital due to panic-selling really has long-term consequences on the future standard of living.

Taking on Too Much Risk

“We were in a fender bender last month. Our truck is a 1992 and since the bid to fix it was over $2,700, we decided not to get it fixed as they would probably total it, and we can’t afford a new truck. We had it checked for alignment and other damage. It’s just a small dent . . . The freezer on our fridge quit on us. We bought it in 1998, so I guess it was old enough. I had some bottles of water frozen in our chest freezer, so I filled our fridge with them until we could get a new fridge. When they got the new fridge to our house, it wouldn’t fit thru our front door. I’m glad we have French doors in back since they were going to charge us another $100 to remove the fridge door . . . I had a phone meeting with our financial advisor. He had no ideas for us but to keep our investments as they are since neither stocks nor bonds are doing well. We decided to try to reduce what we get monthly on our IRA so it will hopefully last longer.” 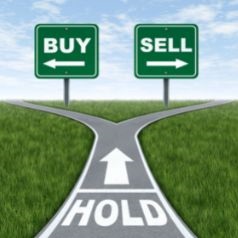 The financial stress being felt by people in their ninth decade of life just oozes from the words. How much money should someone in their 80s really still have in stocks? How large does a cash allocation need to be to avoid feeling like one has to spend less at that stage of life? Fifty-six percent of Americans do not have the financial resources to handle an unexpected $1,000 bill. That includes many who are no longer earning money. As they pay for car repairs and new refrigerators (and rent and groceries), their stocks will be “returning to their rightful owners.”

Bill Bernstein views this as a failure of our retirement system, and he's probably right. But you go to war with the army you have. As you go through this bear market, hopefully you find that your asset allocation was appropriate for your need, ability, and desire to take risk. If so, you will find that you will be one of those “rightful owners,” and the shares you buy during this downturn will have far higher returns than those you bought before or afterward.

Medicine traditionally provides relatively stable income (although perhaps not in the Coronabear). That income should provide you with about the same amount of unimpaired capital to invest each month as you usually have. Now is not the time to sell; it's the time to buy. While the market may yet continue downward, you're getting at least a 20% discount compared to the shares you bought a few months ago. Combine that with higher future expected returns on the shares you already own and didn't panic-sell, and you'll be sitting pretty down the road.

What do you think? What have you done in your life to become a “rightful owner” of stocks? What are you doing now to avoid panic-selling? Comment below!

Excellent article Dr. Dahle. Worth its weight in 24k gold. Very timely and informative!! Stay the course and buy VTSAX. Thanks for all you do 🙏

Would it have been advisable to trim stocks early in the year (Jan or Feb) when we knew the Fed was raising interest rates and Russia invaded Ukraine?

I had had that instict to do so, but didn’t and now am having extreme regret as I have lost so much in all my accounts, taxabale and retirement.

In my opinion it is so hard to predict the markets reactions to news. I know a number of folks who sold their stock portfolio when Trump was elected as they were sure the market was headed south. They gave up huge gains with that prediction. Since the crystal ball is so cloudy, I just stay with my written investment plan and ignore the short term noise.

Good question – and the answer is no, it would not have been advisable. That’s known as “market timing”, and to do it, you have to do something extremely difficult twice – predict the future. It’s twice because you have to know when to get out AND when to get back in (neither of which is easy, even for trained financial professionals). Use this as a learning experience to maybe adjust your “asset allocation” (mixture of stocks, bonds, etc.), but otherwise, chalk it up as one of the many inevitable bear markets (which per Dr. Dahle’s guidance above, happens every 2-4 years on average) you will face in your life and keep buying.

Parents should contribute to Roth IRAs on behalf of their working teens, if any such teens still exist.