But what if that is not the case? Consider this question I received by email:

“I am a rising MS2. My class is very grateful for The White Coat Investor Guide for Students that we received through the WCI Champions Program last year, but I had a student loan question. What do you think about private/institutional loans that offer better terms (such as deferred interest or lower interest rates) than federal loans. How would you weigh the future potential of Public Service Loan Forgiveness (PSLF) against potential interest savings from lower rates? My school offers institutional loans as part of their financial aid package, certain loans being available in higher amounts for in-state and disadvantaged students. The loans rely on donor funding and some are almost pseud0-scholarships. For example, MS1s are offered a 0% lifetime loan to cover half of their first-year tuition. How much are federal student loans really worth?”

Let's take a deeper dive into that question.

When I first wrote this in June 2022, federal student loan rates for most medical students for the 2021-22 school year were at 5.28%. But they were set to rise for the next year since they are based on the “high yield” of the May 10-year treasury bond auction rate for that year. The actual formula is as follows:

If your school is offering you a loan of 5%, much less one that's at 0%, you've got a real dilemma.

The main problem with making this decision (especially as an MS1 or MS2) is that you don't have all the information you need to make it rationally. Look at all the stuff you don't know!

Pretty hard to give advice. It will be at least seven—and possibly as long as 11 years—before an MS1 becomes an attending and knows the answers to all of these questions and then can make a rational decision about PSLF. This was not an issue as long as private student loans had higher rates than federal loans. But once student loan refinancing became available, people had to start worrying about it. Even so, most still waited until near the end of their training to refinance federal loans. But private loan terms that are even better than federal loan terms are like refinancing as an MS1.

How to Ensure Student Loan Forgiveness Through the PSLF Program

The (Nearly) Perfect PSLF Situation for a Physician

However, there is more to this decision than just PSLF eligibility. For example, perhaps the greatest federal student loan benefit for doctors is the various Income Driven Repayment (IDR) programs including:

When you enroll in one of these programs, your monthly payment has nothing to do with your interest rate or student loan total. Your payment is solely based on your family size and your income. That means a typical resident ends up with a payment of something more like $300 instead of a completely unaffordable $3,000 that would be calculated on a typical student loan of that size. While those payments don't generally cover even the interest on the loan, they do count toward PSLF, and, at least with REPAYE, half of the unpaid interest is waived. The resident is also not forced into forbearance or deferral, which is almost always the wrong move.

IDR programs also have a (not nearly as attractive as PSLF) taxable forgiveness program after 20-25 years of payments that you opt out of when you do not have federal student loans.

Once you refinance out of the federal student loan system (or if you never enter it in the first place by taking out private loans from the beginning), you opt out of all potential future benefits of that system.

For the last few years, federal student loans have been a political hot potato, driving those of us who either teach about student loans or work in the field completely bonkers. Every week, there is a different proposal by a politician to change the system in some way. One particularly unexpected benefit has been what I call the student loan holiday, beginning in March 2020 and extending until at least the end of December 2022.

Federal student loan borrowers have not had to make any payments on their loans in that time period. Interest has not even been accumulating. Those who took out private loans or refinanced into private loans have been left feeling like schmucks for doing what used to be “the right thing.” This holiday keeps getting extended (the most recent extension will last until August 31, 2023, or 60 days after the Supreme Court rules on the legality of the forgiveness proposal.) It does look like people will finally have to start repaying their loans at some point in 2023, but when exactly is not yet clear.

Paying Off Spouse’s Student Loans Together

[Editor's Note: We've had to update this section several times in between the time this post was written and publication. It will probably have to be updated after publication too as this is a rapidly changing topic. It is current as of the publication date.]

There have even been politicians talking seriously about mass forgiveness of student loans, a surprisingly unpopular idea among those who do not have student loans and who do not lean very far left on the political spectrum.

Look at this poll taken by the Deseret News and the Hinkley Institute. 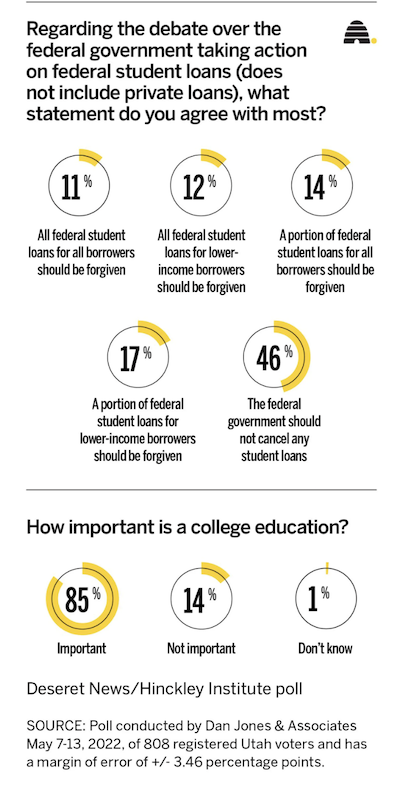 Some liberal senators have advocated for mass forgiveness of as much as $50,000. It's hard to take that proposal too seriously, though, when they are also in favor of the government just paying all tuition directly. However, the Biden administration passed $10,000 of student loan forgiveness ($20,000 for Pell Grant recipients) to borrowers making less than $125,000 ($250,000 married). That's since been challenged and blocked in two courts after tens of millions of people had already applied for the relief. We think it's likely to go all the way to the Supreme Court, but given the current conservative makeup of the court, we're skeptical that it will get through. And given the Republican control of the House of Representatives beginning in 2023, it probably isn't going to pass via the legislative process either.

Now, the Biden administration is being criticized as having issued this rule just to buy votes in the 2022 mid-terms. Presumably, future administrations will be less likely to do such a thing in the future without legislative backup. Notably, the ruling specifically said the other Biden Administration moves (like student loan holiday extensions) WERE within its power. 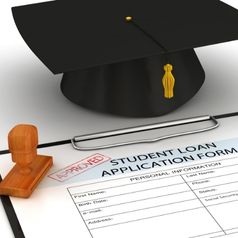 However, if the $10,000/$20,000 forgiveness rule were to actually become law, most residents and many attendings would qualify. While $10,000 isn't going to move the needle for most docs, it is better than a kick in the teeth, and it could potentially be enlarged at some point. Taking out private loans almost guarantees you would not receive that benefit should it ever fully materialize.

Some Advice on Which Type of Student Loan to Use

What would I do in this situation? I would probably do two things:

There is one other option, of course, that can be very useful in a difficult dilemma and that helps to minimize regret. You can split the difference. That way you won't feel like a total schmuck no matter which potential future materializes.

If you need help figuring out what to do with your student loans, book an appointment today with StudentLoanAdvice.com.

If it's time for you to refinance your federal student loans, you can help support this site by going through the links below. The reason WCI is not a subscription service is because our readers support us through win-win deals like this. Not only do you get the best possible rates, but you get cash back that you would not receive going directly to the companies in the chart.

Residents?
Yes
** White Coat Investor accepts advertising compensation from these companies. Page order does not guarantee best possible rate and terms.
† Bonus includes cash rebates and value of free course. Borrowers who refinance more than $60,000 in student loans using the WCI links will be enrolled in The White Coat Investor’s flagship course, Fire Your Financial Advisor for free ($799 value). Borrowers will still receive the amazing cash rebates that WCI has negotiated with each lender. Offer valid for loan applications submitted from May 1, 2021 through June 30, 2023. Free course must be claimed within 90 days of loan disbursement. To claim free course enrollment, visit https://www.whitecoatinvestor.com/RefiBonus.

What do you think? At what interest rate differential would you take private loans instead of federal loans? What would you tell this student? Comment below!

To one of your last points regarding student loan refinancing, attending borrowers who were not going to do PSLF had a super easy decision to make when refinancing (historically speaking). They could refinance their federal loans from 7-8% to 2-3%. It was a no brainer because they’d end up saving 10s to 100s of thousands in interest. This has changed quite a bit as private refinancing rates have gone up a lot this year. Borrowers would be hard pressed to find a refinancing rate lower than 4.5%-6.5% in our current interest rate environment. It’s not that much lower than what’s offered federally. Going forward I think we will see more borrowers keeping their federal loans for longer out of training and/or considering those school/institutional loan deals.

Not all tax questions have clear-cut answers....When you have a choice between two legal [tax] alternative, choose the one which results in the lowest tax.