Priya writes in and suggests:

I wondered if you might discuss Callan charts in a blog post or podcast. They are interesting and give a visual illustration of how different parts of the economy cycle into good times and bad times.

If you know what Priya is referring to, this blog post is likely not going to be very helpful to you. If you have no idea, today I am going to introduce you to an important investing concept.

In 1999, Jay Kloepfer of Callan put together and published a table, very loosely modeled after the Periodic Table of the Elements those of us who suffered through high school and college chemistry classes know so well. Kloepfer's table demonstrated the comparative returns of the various investment asset classes. The idea was to make a visual representation of how the best asset class to invest in changed year to year. I was unable to find the very first Callan Periodic Table of Investment Returns (send me a link if you have one), but I did find the chart from 2007. 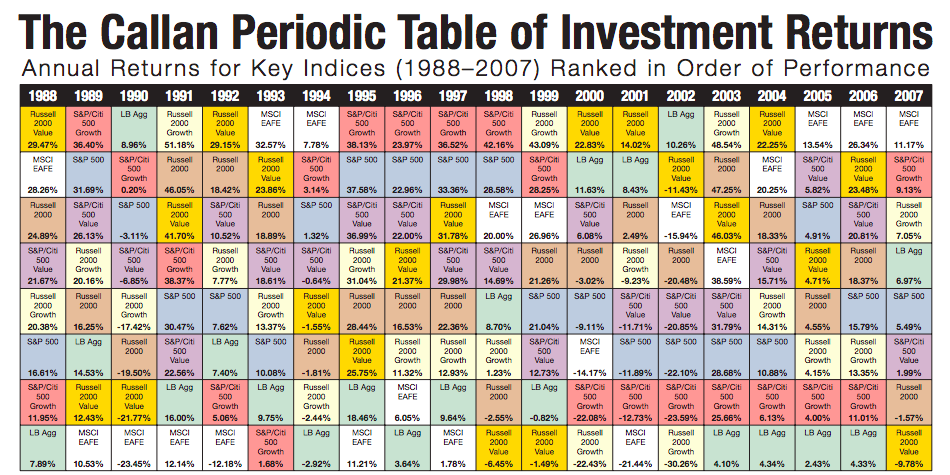 The latest one is also easy to find on Google. 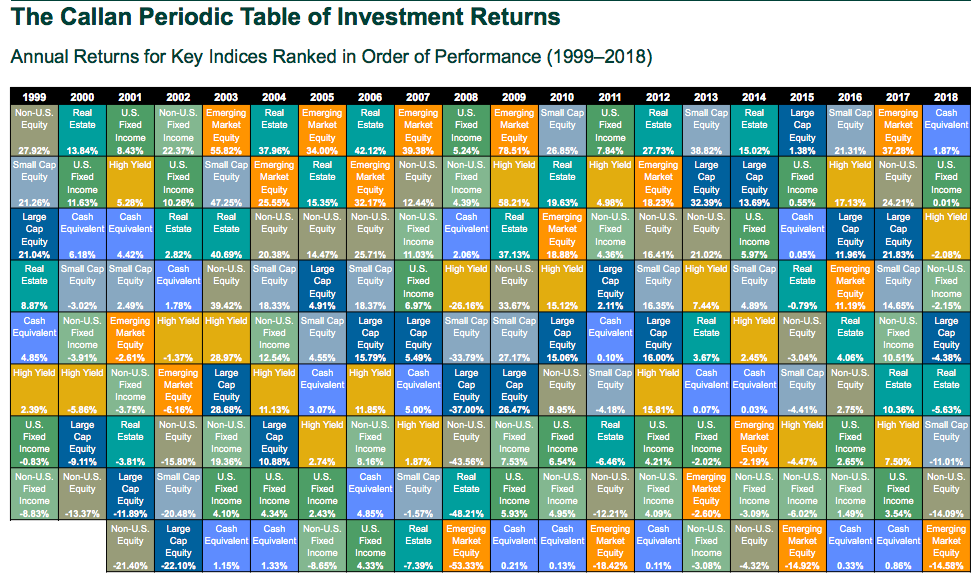 There now lots of variations and different forms for these tables, but they all illustrate the same principles, and those principles are really important for you to understand. You all know I love lists, so let's make a list!

# 1 The Same Asset Class Does Not Win Every Year

The first lesson to learn is that there are no permanent winners. Even if one asset class has higher long-term historical returns than another, that doesn't mean it will do well every single year. Let's take a look at US Large Cap Stocks. In the older version, this is a blue box labeled “S&P 500”, a US large-cap stock index. In the newer chart, this is a dark blue box labeled “large-cap equity”. Over the last 20 years, large-cap stocks were in the top three best performers 6 times and the best of the best once. They were in the bottom three performers 6 times and the worst of the worst once. Emerging Markets Stocks were the best on 5 occasions and the worst on 4 occasions. That means if you want to own the best performing asset class in a given year, you have two strategies available to you:

I recommend the first.

# 2 Return to the Mean Is Real

Jack Bogle always liked to point out that an asset class tends to return to the mean. If something had done well lately, watch out, it was likely due for some rough times and vice versa. The less you pay for a security, the better its future returns. The more you pay, the worse its future returns are likely to be. As you can see from the table, there are many times when a given asset class goes from best to worst and vice versa in a single year. Look at international stocks from 1999 to 2000 or emerging market stocks from 2007 to 2008 or bonds from 2002 to 2003 or cash from 2017 to 2018. Best to worst. Or going the other way, check out international stocks from 1994 to 1995, small value stocks from 1999 to 2000, real estate from 2006 to 2007, or emerging market stocks from 2008 to 2009. Sometimes things turn on a dime.

# 3 There is Some Momentum

Momentum is the idea that what is doing well will continue to do well, at least for a while. You can see that any given asset class doesn't win every year, it doesn't exactly alternate from best to worst to best again in any given period. Sometimes it has a run of good years. Like large-cap stocks in the late 1990s. Like bonds in 2000-2002. Or real estate and emerging markets in 2003-2006. Or sometimes there is a run of bad years, like bonds in 2003-2006 or international bonds in 2012-2016.

Don't assume that just because something did poorly recently that it will do well anytime soon. Much to the chagrin of those with large international stock allocations in their portfolios (which beat US stocks every year from 2002-2007 when I was coming of age as an investor), International stocks have only outperformed US stocks in 2 of the last 9 years. As they say in the sports world, sometimes a team gets streaky.

So when will you see return to the mean and when will you see momentum? In the words of Yoda, “Difficult to see. Always in motion is the future.” The lesson to learn there is that you need an investing plan likely to be successful that doesn't require you to be able to predict the future. That means a fixed asset allocation. If emerging market stocks do well this year? Great, sell some and buy something else to rebalance or direct new money elsewhere. If they do poorly, buy more until your portfolio is back in balance.

# 5 Some Asset Classes are More Volatile Than Others 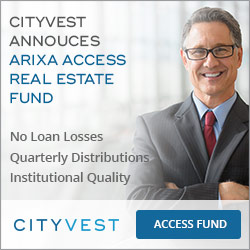 If you look carefully, you will see some asset classes are much more likely to be either the worst or the best asset class in any given year. If you look at the first chart above, you will see that small-cap value stocks were either best or worst 8 times in 20 years. You might be surprised to see that bonds were also either best or worst 9 times in that same 20 years. However, if you actually look at the numbers and not just the relative performance, the small-cap value stock returns ranged from + 46% to -22% while bond returns ranged from 10% to -3%. So relative performance can be volatile while absolute performance is not. And vice versa. Large Cap Value was never the best or worst asset class from 1988 to 2007, despite returns of 32% to -21%.

# 6 Some Years Are Better Than Others

You will also notice that some years everything seemed to do well, and some years almost nothing seemed to do well. Look at 1988. The worst asset class, bonds, returned 8%. In 2008 the highlight was bonds…returning 5%. In 2014, the highlight was large-cap stocks, returning 1% and just last year, cash cleaned house with a return of less than 2%. In almost half of the years, none of the asset classes had a negative return.

The more you stare at the tables, the more lessons you may learn about a given asset class and its relationship to others. But the main lesson you should take away from a careful examination of these tables is the need for inter-asset class diversification. Putting all your money in stocks, especially one type of stocks, or bonds or real estate is a poor way to build a portfolio and, with just a little bit of bad luck, you could end up not reaching your financial goals.

What do you think? What lessons have you learned from examining these tables each year? How have they influenced your portfolio construction? Comment below!

When you diversify don’t forget. It is not just equities and bonds, domestic and international. It should also include pensions, annuities, or social security as well as business and or real estate.

What kind of stool is the most stable? One with FOUR legs certainly not two, and four is better than three.

Although I have known the concepts that these tables help to point out for many years, I have never seen these tables. Does it make me a nerd that I love looking at them? Thanks!

The points you mention are extremely valid. One enhancement that could greatly increase the information would be to scale the asset class by market cap. Scale matters in allocations. You would be able to see growth and decreases in the classes and visually grasp the impact on the total market.
The technique is similar to the “heat maps” used in other visual representations. Equal blocks makes it appear that equal weights which is obviously misleading.
https://finviz.com/map.ashx?t=sec

It’s just a chart, not an asset allocation recommendation.

No intent to be snarky. It was not intended to suggest using it for an asset allocation. However, a weighted average is communicates better information than a simple average. How one uses data from a chart is up to them.

>> Jack Bogle always liked to point out that an asset class tends to return to the mean. If something had done well lately, watch out, it was likely due for some rough times and vice versa.

Regression to the mean doesn’t imply “rough times”. What Bogle meant by ‘mean’ was the “stock market norm”. Most people don’t understand what mean regression really is, and the financial industrial complex has no interest in teaching them since it would limit their ability to sow doubt and fear.

Michael Mauboussin spells out precisely what mean regression is and isn’t in his insightful book “The Success Equation: Untangling Skill and Luck in Business, Sports, and Investing”. In fact, there’s so much confusion on regression to the mean, that even Milton Friedman famously noted that communication was difficult since many noted economists didn’t even understand what it meant. Strangely, since it’s not at all hard to grasp. It’s a function of statistics, not some iron law of reality. It is related to levels of randomness or luck. Moreover, there has to be some meaningful average or it won’t occur. If you rated your neighborhood by household net worth, and Bill Gates moved in he would skew the results so badly that there would be no mean to which to return, unless he moved out of course.

I am the person who wrote in with the suggestion for this topic. Great blog post! And thank you for taking up this suggestion so thoughtfully. I feel sort of famous now 🙂

Lots of posts on this blog start out as an email.

There are books on economic cycles, trading strategies, and sector bets. But the most powerful and important book should be called “Shut Up And Wait.” It’s just one page with a long-term chart of economic growth.