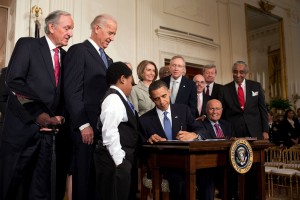 In the first part of this series I discussed the additional taxes you may pay due to PPACA.  In part two, I discussed the benefits you'll see as a consumer from the PPACA regulations.  In this part, we'll discuss how PPACA will affect your practice.

We all know primary care docs have been getting shafted for years.  Many of them can no longer stay in business and are being bought out left and right by hospitals.  PPACA should help with this quite a bit.  Since the insurance company now has to pay for three primary care visits per year without co-payments, people will be more likely to come in and see their PCP.  Much of the preventive care done by PCPs is also covered without a co-pay.

In addition, for 2013 and 2014, Medicaid will pay at the higher Medicare rate, often twice as high.  Medicare rates for primary care visits will also go up 10%.

Some plans require a referral to see a gynecologist.  That's now gone, so OB/GYNs should have a bit of an increase in patient volume.  There will also be an increase in people seeking contraceptives that are now available without a co-pay.

From 2011-2015 rural general surgeons will get an additional 10% from Medicare as incentive payment.

Say what?  Basically Medicare pays you more when you practice in a more expensive location.  They made a recent adjustment that benefits docs in Utah, Wyoming, North and South Dakota, and Montana.

There will now be fewer “self-pay” patients and more Medicaid patients.  While in many states, there is little difference in reimbursement, those specialties affected by EMTALA laws (emergency docs and those who take call from an ED) will at least get a few more bucks for their efforts.  However, there is a limited pot of Medicaid money in any given state.  Since that money must now be spread among more patients, it seems quite likely to me that state Medicaid reimbursements will fall even lower than the ridiculously low rates they are already at.  More and more doctors are refusing to see new Medicaid patients, ranging from 1% of docs in Wyoming to 60% of docs in New Jersey.  I don't know about you, but we get about 1/4 as much money from a Medicaid patient as an insured patient.  I can't blame a physician for limiting his Medicaid population given these kinds of numbers.  Many of our politicians and citizens are going to learn that having “insurance” won't guarantee access, timely or otherwise, to many specialties, at least not those who aren't mandated to do so by EMTALA.

It really irks me to pay more in Medicare taxes, and then get paid less by Medicare, but that's the way it's going to be.  Something like $530 Billion is coming out of Medicare to pay for Obamacare, and most of that comes out of hospital and physician reimbursements.  This will affect your bottom line.  More important, it'll affect patient access to care.  In Anchorage, AK, there are no primary physicians taking new Medicare patients (if you know of one, please email me, my parents could use one.)  I'm sure there are other cities with a similar situation.  If there aren't, there will be soon.  Now, it's possible that there will continue to be a “doc fix” each year, but I don't think I'd bet my practice on that happening every year.

Medicare Advantage is a Republican-designed program that injects competition into Medicare, as a general rule providing MORE benefits to seniors than traditional medicare.  It provides lower co-pays and deductibles, prescription drugs eliminating the need for Medigap insurance, preventive care, vision and hearing coverage.  It does cost more than Medicare, but primarily because it offers more.  It will shortly see significant cuts.  Seniors on these programs will be less likely to come see you, since it will cost them more.  That could affect your bottom line, unless you've already decided not to see Medicare patients anyway.

The trend of fewer independent doctors and more employed doctors will continue as the costs of regulatory compliance and maintaining EMRs becomes overwhelming for a small business.  Expect more docs working for hospitals, large physician groups, and even insurance companies.

The title sure sounds good, until you realize its YOU that's being investigated.  There are a number of changes to current law that PPACA puts into place that make it easier to prosecute your innocent mistakes as purposeful fraud to the government.

Longer Wait Times, More Concierge Care, and More ED AbusePPACA really has it out for the fee-for-service model.  Expect to see the trend toward bundling payments to continue, forcing doctors, hospitals, home health agencies, and skilled nursing facilities to fight over a steadily decreasing pie.  Also expect to not get paid for care related to complications of surgery or any readmissions to the hospital.

Especially with regards to primary care, with more insured patients (and fewer co-pays for preventive services) there will be more demand for physicians, but not more supply of physicians.  That will be reflected as a longer wait to get in to see you (or to send your patients for consultations).  This increased demand will allow more and more physicians to go cash-only or adopt a concierge model and get out of the insurance business entirely, especially with regards to Medicare and Medicaid.  Increasingly, a two-tiered medical system is likely to develop, with those who can paying for a concierge doctor and those who cannot waiting for their care (or going to the ED for primary care concerns.)

I'm not thrilled about the additional taxes I'll be paying for PPACA.  I'm also skeptical that those additional taxes will even cover the costs of the program.  Insurance will definitely be more expensive in the future, although it's hard to say how much.  I like most of the benefits of PPACA as a consumer.  There were a lot of insurance company abuses that will now be illegal.  However, as a doctor, I'm very unhappy with the likely scenario of decreasing pay, increasing compliance-related overhead, and decreased independence.  As a patient advocate, I'm also very concerned with the access to care issues that will be exacerbated by PPACA. It'll be years before we're fully able to understand all the consequences, unintended and otherwise, of this immensely complex law.

I read an explanation as to why Medicare Advantage actually ended up costing the gov’t more money than regular Medicare, and it’s not through dental benefits and gym memberships. I hope I can remember it correctly, since I can’t find the link any more. In a region, if Patient A has $150 dollars of Medicare costs, and Patient B has $50 in costs, the regional benchmark is set at $100. Private insurances must bid under the benchmark, say $90, and the gov’t pays the bid plus 75% of the difference, so gov’t would pay Private Insurance $97.50 for the patient for a cost savings on $2.50. But the private insurances have designed their Medicare Advantage plans to attract the healthier Patient B who only costs $50, while getting a $47.50 profit while gov’t is still covering patient A at $150. That’s why Medicare Advantage costs eclipse traditional Medicare per patient and are rapidly growing. The solution is of course to correct the equation so that gov’t saves more money while making it less profitable for insurances to cherry-pick. In that way, Obamacare and Ryancare both make the exact same reductions in payments to Medicare Advantage

Also, I wouldn’t get too attached to fee for service. Here’s a video of Ryan’s Medicare plan. http://www.breitbart.com/Breitbart-TV/2012/08/13/Get-The-Facts-Watch-Paul-Ryans-Medicare-Plan. As you can see, he is also not a big fan of fee for service. This is a not a partisan thing, I honestly believe physicians are screwed no matter who wins the election.

I dont doubt there are problems with fee for service but to date paying for performance or quality isnt a reality. Almost impossible to measure most of the time unless you want to wind up like the medicare advantage situation where doctors screen for the healthy patients and only take on those cases. Im pretty sure each of our specialties has incentives to improve quality of care. I have to say most of those ive see are bogus and arent going to be helpful in the long run. Its one of those things which sounds great and should be great but unfortunately we arent yet able to make it a reality.

Ok, I said that insurance companies that screen for healthy pts, and Rex said that docs screen for healthy pts. I was confused by that statement, but my overall point remains the same. Medicare advantage is broken because it does not disincentivize insurance companies from screening, thus erasing any potential savings and in fact costs the govt more. That’s why both ryancare and obamacare are adjusting the formulas, in exactly the same way it turns out.

You smoke? Get someone else to manage that htn, bronchitis etc.

Not everything can be screened for but then typically in those situations they can’t differentiate pay for performance.

I personally reverse screen but I like a challenge and death isn’t a likely outcome from MOHs surgery.

I didn’t say they do screen. I implied they would/might/etc.

At the moment, few really screen.

Rex, I agree, I have not personally seen screening. For example, I’ve never seen a PMD sign off a case and put another PMD because a case was too hard. Id be curious to hear from anyone who has seen that. Of course a PMD might ask a cardiologist for help for Bp mgmt, but with pkg payments you are disincentivized from bring on consultants unnecessarily because that’s money going from your pocket to the consultants. Something I have seen is PMDs who, for any pt who is admitted to the hospital, put multiple consultants on simultaneously. For example, pt comes in with cough, na of 120, and altered mental status? Get pulm, neuro, and Endo on the case. PMD does nothing but high five the pt and bill him. This is not a theoretical problem, this is actually what goes on.