[Editor's Note: Registration is open for the Physician Wellness and Financial Literacy Conference (WCICON22). This CME eligible event will be held February 9-12, 2022 at the JW Marriott in Phoenix, AZ. You won't want to miss this hybrid conference containing both in-person and virtual packages. Click here for more details and save the date today!]

Hi, I am Jim Kettinger, MD. My wife is Linda Kettinger, RN. We were married in 1981 when I had just finished one year of medical school at Ohio State. She had just graduated from nursing school. I was 23 and she was 22. We just knew we were meant for each other and did not want to wait.

She supported us in those last three years of med school, and also bore our first two sons in those years. She ended up getting a job working 24 hours on the weekends, every weekend, getting paid for 36 hours, and keeping our medical insurance and family going. This enabled her to be home for five days a week with our babies and keep them out of daycare. But she never got a day off. And as a medical student in the 1980s, my clinical duties were often seven days a week, sometimes for 12-14 hour days.

Career in Medicine vs Family Life?

We were both exhausted, but we each knew that marriage was about family. I had always wanted to be a doctor, but even more so, I wanted to be a father and husband and have a family. In fact, I temporarily dropped out of OSU at the start of my third year as the medicine rotation was especially taxing with a baby due that month. I did not want part of a culture that expected and inculcated 80-100 hour weeks. I was now a family man, and that was way more important. I called my old high school, and they would bring me on as a science teacher and coach for both wrestling and football. I know I would have thrived in those roles.

Well, Ben was born; life settled down. I had two months off (the rotation I missed), and I met with the dean of OSU Medical School, Dr. Hutchinson Williams. In all of our lives, there is frequently someone of grand influence, and Dr. Williams was mine. I indicated my concerns about this lifestyle of medicine to him, and how family was way more important. In his grandfatherly manner, he pointed at the OSU University Hospital from his office, and stated, “Jim, that is not the real world. You have come this far. Finish it, and then you call the shots.” We shook hands. “You have a deal, doc”, I told him. I would finish.

The next 18 months were tough, often long, but rewarding. I knew I belonged in medicine. Along the way, we had son number two, Dan. Residency loomed, and I applied to Family Practice (I was a family man, right?), and was accepted at Mount Carmel Family Practice in Columbus, Ohio. Actually, the nicest human beings in medicine, in my humble opinion, were either Pediatricians or Family Doctors. I wanted to be like them. They listened, were kind, and were far from arrogant or full of themselves. Real people, I thought. And I was right.

If we were somewhat overwhelmed (actually, a lot overwhelmed) in med school, residency blew that out of the water. Call every four nights as an intern. 34 hour shifts. Moon-lighting 50-60 hours a month to buy a van and down-payment for a house for our now growing family, as we added two more sons in the residency years. But throughout it all, our faith in each other and in our family and in our Catholic church never wavered.

At age 29, I graduated from residency, taking a job in a traditional family practice as an employee. I lasted 10 months, as the 70-year-old patriarch of the practice had no intent to stop. He did it all—anesthesia, coroner, jail doctor, nursing home doctor. I could not and did not want to do what he did, especially with four young sons and a wife who could really use a break.

So many good people at churches—I met a new mentor, a radiologist with seven of his own children. He led me to another doctor at church, who then led me to my job of 18 years in college health. The dream job for a young doc with a family. 8-5, no nights, no weekends, no holidays, summers off. Wow! I could coach my sons’ sports teams, travel to national parks, be home for dinners. Life was quite good.

One problem—the salary was quite low—$51K in 1988. Not bad, but not enough to save for college, retirement, and all the expenses of active boys. Fortunately, I had learned how to practice emergency medicine in residency by moon-lighting for years 2 and 3. I continued in this practice as I took care of college students. It was a great combination of stresses to avoid burn-out. I worked one night a week, and one weekend per month. Plenty to supplement my university salary. In addition, I received a state pension that I have continued to add credits to through some work as a deputy coroner the last ten years.

Financially, my wife and I had always been on the same page. Conservative, cheap, frugal—whatever you want to call it. We both grew up with limited lifestyles, not wanting or needing much. We are still in the same house of 1,900 square feet that we bought in 1987. We have never seen the need or want to move up to the “doctor house”. Great location, four bedrooms, a wrestling mat in the basement—what more could a doc want?

Remember those four sons in just over four years? We had two more, another son and finally, a daughter, 9 and 12 years after the 4th son.

Intentionally Having the Best of Both Worlds 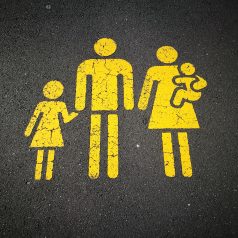 So where are our finances today? Actually, quite incredible for the way we started out. No debt since age 38, and multi-millionaire status. I have always been a super saver, contributing to my SEP-IRA and taxable accounts, as well as my wife’s Roth and an HSA, and children’s Roth accounts. In fact, my daughter just graduated from college and has a Roth of $51K. I have created a millionaire at age 22! Today, I work full-time ER in a smaller rural hospital, and have for the last 15 years. Now I make “doctor” money, but largely still live very simply. My goal was never to get wealthy; it just happened. Really, my goal was to raise my family and get them educated while taking care of as many people as possible along the way. I have enjoyed medicine immensely, I think because of my focus—family, and not stuff. Experiences and education were paramount. One of my sons, now a podiatrist, at age 15 commented to me that “we need a tighter crib”—meaning a bigger (doctor) house, and that we lived like I was a teacher. I told him that was by design.

Now at age 63, I can see God’s hand in all of this. I met my future wife at a 1979 New Year’s Eve party, when she specifically went to meet another college man. I had four sons serve in the military. I was able to teach Natural Family Planning. I spent 34 years in medicine. It has truly been a very good run.

[Editor's Note: This article was submitted and approved according to our Guest Post Policy. We have no financial relationship. Medicine certainly stresses a family, and all of us interested in family and medicine have to find our own balance. Just remember as you find your balance that the hospital will never love you back! I like that this post demonstrated that one could tip that balance pretty far toward family and still find financial success through hard work and frugal living.]

What do you think? Is a successful career in medicine exclusive of a successful family life? How have you simultaneously been able to thrive in both your career and family? Comment below!

Thanks for sharing your story! Family and medicine certainly has not been reclusive for me this far and it’s very important to keep it that way for me and my wife. Like you say, it requires intention!

I enjoyed your story, Dr. Kettinger!

What a life! I am very impressed that you took time off from medical school as a man back then. That small sacrifice proved to your wife that you really meant it when you said family first. The rest of your next few years sounds pretty brutal but it was pretty standard for a mother/ homemaker and a medical resident back then. The real key to your success is staying well within your income by choosing a more frugal lifestyle over a higher income with many more hours at work and/or a smaller family.

Throughout my family’s career, this two doctor couple saw many one doctor couples living much larger than we ever did. We always anticipated that one of us might want to stay home with the kids and our spending behavior made it possible to do this when there was no other option professionally such as when the military posted us overseas, and now that we both decided medicine was not for us anymore.

Although the white coat investor helps us who read him manage our higher income and assets, we should all remember that so many more Americans do so much with so much less and that the size and cost and fanciness of the house, car, hair do, education, etc. is much less important than the time spent off duty with family.

This is the best blog entry I have read on this website (and that is saying a lot)! As a Catholic family physician a generation behind you (37 years old), this is very inspiring. God has certainly blessed you for your faithfulness to your callings as dad and doctor. Thank you, Dr Kettinger!

Glad you enjoyed it.

Great and inspiring article. I had 2 kids in medical school and one in residency. When I tell people this they look at me like I’m crazy. Seems like a lot of the thinking is wait until your done..at 30. Me and my husband worked it out. Finances were definitely different with young kids and $150K debt, needing more bedrooms etc. Thank you for sharing, more should be like you.

I enjoyed your article. You have developed into the type of man that I knew you would be.

People's comfort with investment volatility is dependent on their current state of mind. When the stock market is racing up, people are comfortable with volatility.