It was 2016. The year of the US presidential election. The year the Cubs won the World Series. The year my grandfather died weeks before I gave birth. It was also the year I got divorced to save money.

Yes, you heard that right. I got divorced to save money. My then-spouse and I were looking at the numbers and creating a trust before the birth of our second child (or third child if we count the one that died in-utero). We spoke with our trust lawyer and floated the idea to our accountant. There was no reason we couldn’t get divorced and stay together. If we were divorced, we could file taxes separately. If we were divorced, my earnings didn’t pull up the financial burden of my spouse’s income-based student loan repayment; these loans were in the hundreds of thousands and could easily cost more than our mortgage of $2,390. If I wasn't in the picture, at least in a legally married sense, he could pay less on those loans.

Before you judge me, know that we took out as few loans as possible and tried paying them down. In 2013, my spouse/partner lived away during the week (home on the weekend) to complete their doctoral-level training. (Yes, it was one of the many hoops to get the doctoral degree.) I started a new pediatric job with a large organization (aka more money, like twice the amount!) and cared for our toddler. We paid over $1,000 per month in an attempt to pay down the student loan interest so it wouldn’t be added to the principal, aka becoming compound interest. We paid for two households and childcare. My income doubled, but it didn't feel like much with the new expenses—childcare from $895 to $1,300 per month, rent for a room $600 per month, and who knows how much on gas with the long, long drive to and from Portland every week. It felt futile.

With a second child on the way in 2016, ballooning childcare costs loomed before us—$2,000 per month for my daughter’s part-time nanny and $1,200 per month for my son’s preschool. We also needed a bigger house for a larger family.

We decided to get a divorce.

Navigating the Finances of Divorce

Why We Got Divorced to Save Money

How it happened was that the lovely online tax service people often use, which we will refer to as Urbot Axt, gave me the option to pick Head of Household on our tax return. So, I picked it. I noticed I saved money with this designation vs. the Married Filing Jointly option. I played with the numbers and realized over the course of a year that we could save, easily, several thousand dollars. I realized I could not pick that option because we were married, and I began wondering what the benefits of marriage were—at least tax-wise. It turned out there were none for me. And so I got a divorce.

When people talk about the expense of a divorce, they are not talking about the actual process of getting divorced. The process to get divorced in Oregon is annoying but not expensive if you involve no attorneys and live in the same household as your ex. My ex and I did this. And we saved money. I could file as Head of Household. My ex filed as Single. We became partners instead of spouses.

Yes, we were both on board with the idea. Money was a stress. Getting divorced was a way to deal with that stress. West Coast living and parenting are not for the faint of money. The divorce wasn’t ideal or even desired but simply a practical choice to support our children.

We didn’t make it public knowledge. Our families still don’t know, unless they read this column. (We have not actively hidden it from them but have felt that, coming from a conservative religious background, it could cause a rift where a rift wasn’t needed.)

What’s annoying about getting divorced is the stale parenting class, the fact that pregnancy is not viewed as a factor in the divorce decree (the child doesn’t “exist” until it is born, even at 40 weeks gestation), and a judge that doesn’t believe a couple can “figure out parenting details.” We had our divorce rejected by the court due to insufficient data for how we would parent and how expenses would be decided. Twice. When my second child (or third child, depending on how you count) was born, we weren’t sure if we were divorced or not, due to the slowness of the court process. It was rather silly. The registrar in the hospital completed an extra form—in case we were divorced—to acknowledge that my child's father was, in fact, her father.

Soon after the birth of our child, we got documentation from the court that we were officially divorced. 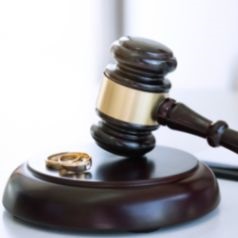 Financial Checklist to Complete After Divorce

Has Gotten Divorced Saved Us Money?

Has it been easy? No. Has it been worth it? Yes. Relationships are worth it but not easy. I would say the divorce hasn’t changed our relationship. Parenting has, though. The life of a parent is exhausting and, sometimes, rewarding. I say this with love and respect for all caregivers, including myself.

Have we saved money? Yes and no. Honestly, our expenses have increased with children. Living with neurodiversity is a level of expense of its own with psychological assessments, doctor and therapy appointments, and social and educational supports. Yet, neurodiverse people are also the reason I am even writing this today on a computer in a building with electricity and heating. (There is a reason some children are called twice exceptional.)

Have we picked a better future for our children? I think so. By being divorced, we’ve had more financial flexibility, which has led to job flexibility. We are with our kids more. We can advocate for their needs. We can play with them.

Now, my partner and I are considering whether we should get married again. The new tax laws make it less advantageous to be divorced. Maybe we can. Maybe we will. Until then, we are divorced and living in the same household. And that's the way we like it.

Have you ever thought about getting divorced to make your relationship more tax-efficient? Is this something you would ever try? What kind of pitfalls and advantages do you see? Comment below!

Thank you author for publishing this post! I agree that how much you love someone is not defined by the government. With the money you and your partner have saved it might even improve your relationship and strengthen the bond between the two of you. Now you have less overall financial stress and can use some of your extra money to donate towards worthy charitable causes. So happy for you author! I think my wife and I may consider this as we have some charities we love as well and would like to give extra $ to.

Re-reading this post since it was in the “most controversial” list, I had a few more thoughts.

First, the author reports that they went over the plan with a trust attorney and a CPA. This makes it difficult to take seriously the declarations of people on here that this violated either state or federal law. The attorney and CPA knew more about the couple’s plans and circumstances than we do. It would be hard to conclude that a doctor who knows almost none of this could be correct when they declare the legal and tax advice the couple received to be wrong.

Second, I would love to see a follow up post in which the author reviews the tax and non-tax implications of being divorced vs married. They investigated it carefully and apparently dealt with things like responsibility for child care, custody, etc. Did they think about long term things like Social Security and inheritance? Or did they assume they would be married again long before those things came up?
Any issues with schools and health care providers about who has authority for decisions about the kids? What does divorce do to asset protection, such as tenants by entirety titles for property? I assume that goes away, if it existed at all in the author’s state.
How does the couple manage health insurance? Can they put the entire family, including the ex spouse, on one employer plan? Or do the kids have to go on one of the adult plans but the spouses cannot be on the same plan?
Did the attorney and accountant point out any other adjustments that would be necessary?

For the adults, I assume that all of the ability to act on each other’s behalf is handled with Durable Powers of Attorney. At least in my state being married does NOT give one spouse automatic authority to do much of anything on behalf of the other. Even straightforward financial transactions require the same formalities as they would if my spouse and I were not married.

Third, is there a plan for triggers that would indicate that it is better to get married again? Ages of kids? College tuition plans? Longer term financial planning? Do you jointly own a home? Cars? Other big ticket items? Any complications from that?