Last week was Thanksgiving. Yesterday was Giving Tuesday. It's now December, and I hope the Christmas/Hanukkah/Kwanzaa/Bodhi spirit is beginning to spread across the land. The end of the year is also coming, which matters if you take significant charitable deductions on your tax return. For whatever reason or combination of reasons, annual charitable giving amounts are heavily back-loaded in November and December.

We're no different here in the WCI family; we always have our annual family giving meeting in December where we decide which charities to support this year. This year, we've decided to let the WCI community help out with the process. Leif Dahleen at the Physician on FIRE has done something similar the last few years and it has worked out well, so we're going to go for it.

The Process to Submit a Charity 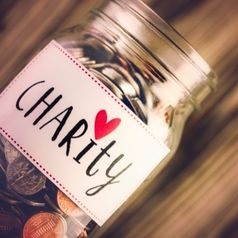 Here is how we are going to do it. We are allocating $50,000 of our charitable deductions this year to this “contest.” You can enter the contest by posting one (and only one) comment below the post. You may name one (and only one) charity in the first line of your post. You may then include in your post whatever commentary you'd like to get other readers/commenters to vote for the same charity. You may vote either as a reply to that comment (especially helpful if you're voting for the same charity) or as a separate comment.

If the charity name is not in the first line of the comment, it will not be counted. All other comments will be ignored for voting purposes.

We will give $1,000 each to the 50 charities that get the most votes. If there is a tie, we'll choose our favorite(s) from the tied entries. You will have one week from today to get your votes in, at which point they will no longer count. That means December 8 is the last day to submit your votes. Here are the rules for entries:

OK, that should be enough rules. We reserve the right to change them as we go along in case we made a stupid one. Let's have some fun with this. Don't forget that you want to register your vote AND also include a paragraph below it convincing others to also vote for your favorite charity.

[Update 12/9/2021: The contest is now over and I've turned off the comments on this post. Unfortunately, there were A LOT of people who did not read the rules above, did not bother looking up their favorite charities on the charity rating sites to make sure they were rated, or just assumed that other posters who first listed a charity did that verification for them. There were also several of you who voted multiple times. In the end, over half of the votes didn't count and we didn't actually even come up with 50 charities that met the criteria. We did come up with 47 though. We're sure our kids will be able to make up the difference at our annual meeting. Here are the winners. If your favorite charity did not make the list, it's probably because it did not submit enough info to CharityWatch or CharityNavigator to be rated. It's probably a great charity, but rules are rules. The good news is that I learned about a lot of charities I didn't know about and there are 46 great charities here who will each be getting $1,000! Honorable mention should be made to several charities that got a lot of votes (NF2 BioSolutions, Tri 4 Schools, Isha Foundation, GiveWell, and Best Friends Animal Society, all of which got a lot of votes, even if none of them counted due to their lack of a rating.] 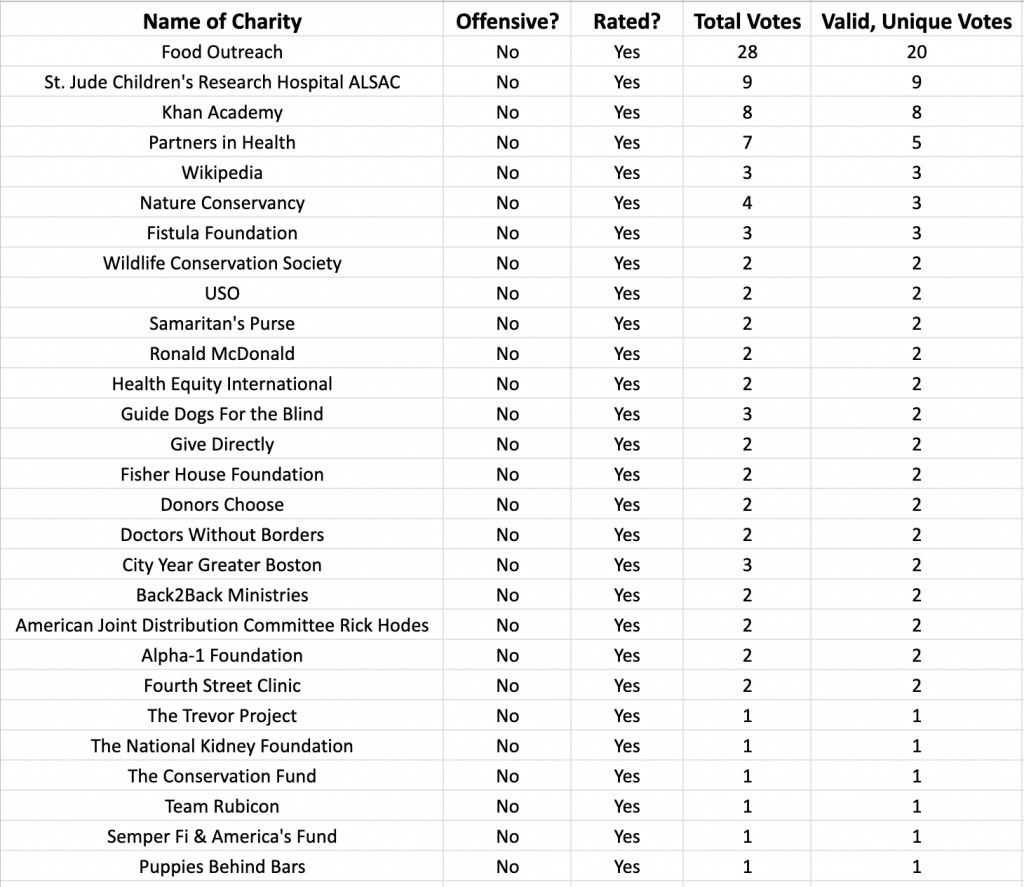 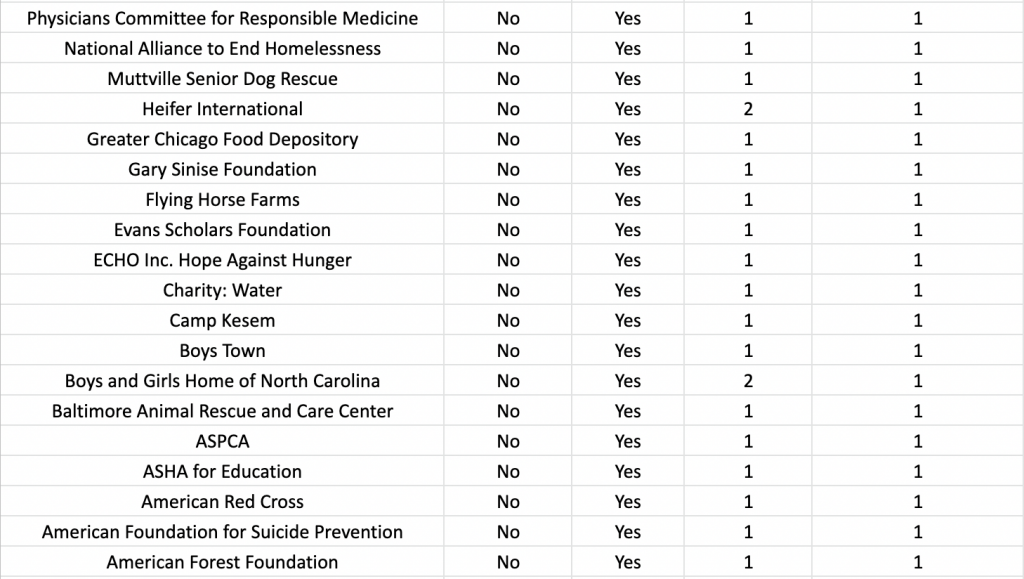 We hope you had as much fun reading about these charities as we did.  We encourage you to also donate to the ones you deem worthy. Our family's selected charities this year include:

Current matching fund to assist in education expenses for residents of Habitat homes. A home and an education leads to positive, measurable outcomes in both financial and physical health for the individuals and our community.

Thanks for your generosity and the opportunity to participate .

They provide education for underprivileged girls in India.
https://www.charitynavigator.org/ein/770459884

Since attending a presentation on Mr.Sinise’s R.I.S.E. (Restoring Independence Supporting Empowerment) program, which builds 100% mortgage-free specially adapted smart homes for our most severely wounded heroes, I have donated several thousand dollars per year to this foundation.

Please check out this organization https://www.garysinisefoundation.org/

I have a couple friends from medical school who have committed their careers to improving lives in Burundi and now other countries in Africa. AMH is instrumental in getting financial support directly to those hospitals and clinics.

Camp Kesem is a national organization that helps support children of parents that have been diagnosed with cancer. There are chapters affiliated with colleges/universities throughout the country. The program’s main focus is a week-long camp over the summer that kids can go to and meet other children who are in similar circumstances. The camp is completely free, with costs covered by donations throughout the year and during major fundraisers. This also is a good opportunity to spread the word a little, in case any of you know families that could benefit from such a community. In addition to the week-long camp, there are other functions/activities throughout the year. It has been more difficult with Covid pandemic, with camp having to go virtual, but hopefully camp will be back in person Summer of 2022. If you can’t donate, it’s at least worth knowing about such a great organization.

Their goal is to end hunger and poverty by bringing sustainable food sources and care. Rather than just donating food, they donate the supplies needed to increase food production in areas of need.

I vote for this.

Physicians Committee for Responsible Medicine (PCRM)
mission to advocate for ethical research and education, end cruelty to animals in labs and classrooms, and promote lifesaving nutrition policies and practices.

I vote for NF2 BioSolutions!

I vote for NF2 BioSolutions!

48 hours after announcing our own charitable giveaway, we have 11 grants left to give. It’s only $100, but there’s no vote. Just make your request (following looser guidelines (no primarily religious or polical orgs, must be a 501(c)(3)), and your grant will be fulfilled.

Feel free to repeat the request you’ve made here at WCI on my site: https://www.physicianonfire.com/giving-tuesday-2021/

Bizarre those grants aren’t all claimed yet! Can I claim another? 🙂

A Jewish doctor living in Ethiopia runs a medical clinic with Catholic nuns at the Mother Teresa Mission in Addis Ababa caring for the sick destitute of the horn of Africa, mainly Orthodox Christian, Muslim, and a small number of animist patients. There’s a special emphasis caring for heart and spine patients.

Also, he’s conducting this work during a civil war.

I vote for the Trevor Project, http://www.thetrevorproject.org

I vote for NF2 biosolutions

I heartily cast vote for the work of Dr. Rick Hodes in Ethiopia.

“For over 80 years, Lutheran Immigration and Refugee Service has been a champion for refugees and migrants from around the globe.

Our legacy of compassionate service has made a difference in the lives of hundreds of thousands of people who have found safety and hope in America’s communities.

Our history reflects American Lutherans’ deep immigrant roots and passionate commitment to welcoming newcomers, especially those who are most in need.

Through the Long Welcome, we help ensure that refugees and migrants are protected, embraced and empowered in a world of just and welcoming communities.”

They have a 100/100 on charity navigator and some of their most recent work has been helping with resettling refugees from Afghanistan.

Anti human trafficking and sexual exploitation organization that was started by my wife 12 years ago. She no longer runs the day-to-day operations, but we have remained fully committed through volunteer work, board participation, and financial partnership. The mission is to prevent and end sexual exploitation and trafficking locally and globally. They raise awareness, provide prevention education, and expand the restoration work of our partners who are located stateside and globally.

Thank you for your generosity in doing this! Would appreciate votes, so all who see this please read further about our work here: freedom424.org

A 10% decline in the market is fairly common—it happens about once a year. Investors who realize this are less likely to sell in a panic, and more likely to remain invested, benefitting from the wealthbuilding power of stocks.