Shots pierced the dark, rainy night as a young Bruce Wayne watched his parents fall by his side and their assailant flee.  A social worker quickly arrived, comforted the traumatized Bruce, and brought him back to the Wayne Estate.  There, his caring butler raised him and shielded him from the true impact of his parents’ death, and Bruce developed into Batman.

Back in the real world, muffled cries and tears met the crushing silence that pervaded the ICU room as my father lost his fight to advanced glioblastoma.  At just three years old, I recall glancing at the blank monitors as my grandfather coaxed me out to the waiting room and into a new reality.  This is my earliest memory. 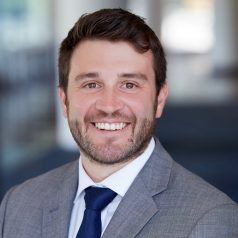 Countless comics and movies have shown the heroism Batman displayed in overcoming adversity and fighting the crime that took his parents’ lives, but comparatively little attention has been paid to the heroism displayed by Alfred, his butler.  In an acute crisis and with no clear path forward, Alfred shifted his priorities and dedicated his life to raising a young boy with the proper values and resources to succeed.  In many aspects of modern culture, Batman gets the glory, but much of it is owed to Alfred.

My mother was the Alfred and so much more in my life.  In the span of only several months, she had lost her husband and had two young boys to raise, including my newborn infant brother.  Losing hope and giving into despair would have been easy and understandable, but my mother instead chose to become a superhero in her own right.  Possessing only a high school diploma at the time, she returned to school to obtain an associate degree in medical transcription.  She also moved back home to South Dakota to be nearer to family, where I spent my childhood.  Supported by my mother in every aspect of our lives, my brother and I enjoyed a relatively comfortable childhood in a loving home.  She ensured we did not miss out on a single opportunity just because she was a single mom.  She helped me navigate boy scouts even though she was the only mother there, and she was active at all my sporting events and tournaments, despite often having little understanding of the game.  Perhaps most importantly, she prioritized our education and sent my brother and I to the local Catholic school despite its high expense.  Here, I developed my love of math and science that ultimately led me to medical school.  In short, I saw true heroism displayed outside the realm of comic books each and every day through my mother’s unconditional support and unwavering resolve in the face of tremendous adversity.

Despite my mother’s heroic efforts, a lack of financial freedom and looming debts played an ever-present villain.  She drove an old 1995 Honda Odyssey affectionately nicknamed “The Beast”, always one disaster away from irreparable harm.  When I was in high school, budget cuts at the hospital my mother worked for resulted in a devastating decrease in her income, forcing us to move from my childhood home to a small apartment.  However, this villain reared its ugly head most prominently as I began to apply to college and was forced to have an earnest conversation with my mother regarding our family’s financial status.  I quickly realized that all the hard work I applied in the classroom, the band room, and various sporting fields would certainly help me gain admission to top universities but would do little to overcome the monstrous cost of attendance.  After years of being shielded from this harsh reality, I was essentially on my own to foot the bill for any of my dream schools.

Fortunately, I discovered the QuestBridge National College Match program and was able to afford a wonderful university experience.  There, I majored in applied mathematics and continued carving a path toward medical school.  Although more limited in her direct ability to do so, my mother persisted with her unwavering support from afar, and I moved one step closer to becoming the Batman to her Alfred.  In much the same way Batman practiced martial arts to combat the villains in his life, I hoped to treat cancer patients and their families and ultimately defeat this insidious villain that had taken so much from me.

However, cancer had not yet finished its onslaught.  While away on a medical school interview during my senior year, my mother called and informed me she had been diagnosed with pancreatic adenocarcinoma.  True to her heroic character, she insisted that I finish my senior year and begin medical school as planned rather than taking time away to be with her.  And so I did.  However, when she eventually became hospice bound after surviving a cardiac arrest in the intensive care unit, I took several months away from clinical rotations to be at home with her and family before her eventual passing.

This time away necessarily extended my medical education by an unexpected year, but it has also afforded me the luxury of time for introspection, both for my career path and for reflecting on my mother’s life.  Her heroism was even more apparent during her final months than the rest of my life; she never once complained and always insisted that I move forward with my aspirations, even if it meant missing out on our limited time together.  She was my Alfred and more until her untimely end.

Now finally in my last year of medical school and with residency on the horizon, my own heroic aspirations have never been clearer, though the villains I have chosen to combat have changed.  Recalling her most frightening moments in the ICU, I now aim to battle both critical illness in the ICU as an aspiring anesthesiologist and critical care physician as well as my own previous financial insecurity.  In advocating for and treating my patients through some of the most terrifying and challenging times of their lives, I hope to become both their Batman and Alfred.  Armed with a long white coat as my cape and my mother’s memory as my primary tool, I can best serve the true meaning of super-heroism and ensure that my future family and others do not face similar challenges.

It is difficult to get a man to understand something, when his salary depends on his not understanding it.