To my great aunt who helped raise her younger sister.
She gave her love despite her resentment
She fed and rocked that baby girl
And dreamt of living free and playing children’s games
She learned to work young
It was a chance to walk outside the gates of the refugee camp
And pretend things were normal
Whatever that was
Maybe it was back in Yugoslavia
When they were citizens
When they belonged to a country, a place, a people
Before they left everything and fled into the unknown with terror at their heels 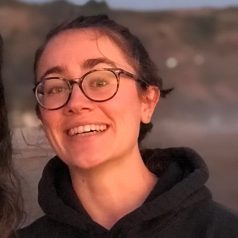 To the minister who sponsored a family of refugees.
Who paid for their long journey across the Atlantic
A fresh chance, a clean start, a new life
They found a hovel to live in and back breaking work in the thick humidity of Alabama
Was this really the land of the free?
The golden land of opportunity?
At least in the camps they’d had a strong community

To my grandmother who started kindergarten in a new country.
They made fun of her twin braids and her dress and her foreignness
With no former knowledge she dove right in.
She worked very hard and strove to fit in
By the end of year one she spoke English with precision

To my grandfather who spent his youth by saving his coins.
In southern Germany he sought any job he could get
He lived through the bombs
And avoided the bodies of those who did not
Who, too, sailed across the ocean to find a new life
He learned English from TV shows, movies, and passing conversations
He washed cars and dishes, worked odd jobs, and roamed house to house
He saw an opportunity
Built a business from the ground
Cleaned houses for the well-to-do
Supported his family through and through

To the daughter those two immigrants bore.
She grew up happy on the Pacific shore
A foot in two cultures, she forged a new path
First to college and then grad school
She ensured she wouldn’t be the last

To the man she married.
American born
Proud of his hard earned college degree
In between studying he was watching over me

To the young parents of two under three.
They moved back west to be near family
He searched for a job
They searched for a house
She searched for time to do things for herself
They found a home and settled down
Another child came around

To the father who drove sixty miles back and forth.
And worked long hours in between
To provide what was needed for his family
A tie gently placed at the end of a bed
A sign that the father left in his stead
The children were proud, in the tie each had a say
Gleefully selected every third day
To the rituals that kept them connected

To the mother, caretaker of three.
Little sleep and lots of work
No breaks
No lunch hour
No salary
She packed lunches and biked with us to school
Taught us how to avoid parked cars
And moving cars
And to signal before turning
Encouraged us to chase after our dreams and stand up for ourselves and others
Believed in us even when we couldn’t
Gave us grace when we least deserved it

To the surgeon who gave me hope and inspiration.
Fostered a dream – a new creation
Perhaps one day I would also be
A physician who cured
Who taught
Who gave hope
Who could make a difference for future folk

To my family who supported me along the way.
Who believed in me day after day

To twenty-one year old me who decided against continuing straight on to medical school.
She followed her roots back across the sea
To live for a while far from family
Language and culture was the goal
A year in Austria
Another in Spain
New perspectives on life were gained

To the host families abroad who opened their homes.
And their hearts
And their lives
Fostered me as if I were family
An exchange of opinions and assumptions and ways
An immersion in language
A new flow to my days

To the parents who welcomed me back to the nest.
A little time and space for a much needed rest
A place to integrate all that I learned and experienced
A place to reconnect with family
A place to study and write and apply
A place to save money to pay for the test
And the primary
And then a summer of secondaries
A place to wait anxiously month after month
For results
And replies
And rejections
A place to celebrate my first acceptance

To the school director who gave me a chance.
To teach and to learn
While I saved up some money
And followed my plan

To the students who taught me as much as I taught them.

To the experienced teachers who let me observe.
From whom I discovered new ways to teach and to lead and to learn
They gave me their time and accepted me in
A place to grow and a place to fit in

To the family and friends who dreamed and worked and paved the way.
Who made it possible for me to be here this day

To the strangers who held out a hand.
Who without knowing helped me to stand

To all I have mentioned plus those I have not.
Thank you – from a future doc

From future patients who I will serve with pride.
Refugees and immigrants just trying to survive
Mothers and fathers and children and families
All those struggling to plant two feet on the ground
Those who dream and sweat and come from meager backgrounds
Who are working for those who are still yet to come
I will pass on the torch
I will bring light to lives
I will help all those around me to thrive