Nine days. That is how long my father and his brother survived on icicles as food in the Himalayan Mountains of Tibet after their yaks died during the perilous journey. Just teenagers at the time, they spent nights lying in opposite directions rubbing each other’s feet to prevent hypothermia. Due to the Chinese Communist regime’s invasion of Tibet in the late 1950s and the genocide of Tibetans in the following decades, my father and uncle fled, walking from Eastern Tibet for months, across treacherous rivers and over snow-covered mountains to seek refuge in India. In 1997, I was born in a small refugee camp in Northern India called Bir that later evolved into a Tibetan refugee settlement as a result of the Tibetan diaspora. 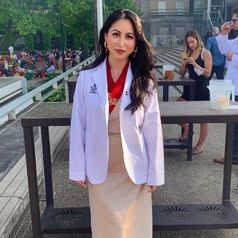 Bir was a rural, village-esque place where we shared paths with cows and goats more often than cars and bikes. The smell of cow dung pervaded the air along the dirt paths my cousin and me, our oil-slicked hair pulled into tight double braids, traversed to and from the nearest Indian elementary school.

I returned home from school one day to a strange stillness as my parents wept. My grandfather had passed away from an unknown lung condition with persistent fever and bloody coughs. We now know it was tuberculosis. Underserved and under-resourced, illness and premature death were common in Bir as the sole clinic had only one Tibetan physician providing care for the entire refugee settlement, and the nearest hospital was two hours away.

While growing up in congregate facilities like my Tibetan refugee boarding school, I saw first-hand the impact that access to healthcare can have. Witnessing the affliction of my family and community members with manageable diseases like TB ignited my desire to eliminate and prevent such diseases in underserved communities. I admired the volunteer physicians from the U.S. who came to Bir to provide us with aid. As an inquisitive child, I was amazed and intrigued by their knowledge of the human body that allowed them to diagnose conditions and treatments. Despite language barriers, I recall the physicians’ humanistic care and respect for our culture and autonomy while improving the health of our refugee settlement. These formative experiences with medical professionals inspired me to pursue a career as a physician.

Even by 2008, Bir afforded little to no educational opportunities or hope of social mobility for Tibetan refugees. But in 2009, through the lottery-based system of the U.S.’s Tibetan Resettlement Project, my family moved to Wisconsin with great hopes for educational opportunities that would offer a new upward trajectory for my sister and me. Acclimating while navigating high school and college as a first-generation student was a unique and difficult experience; I was often the translator for my father during doctor visits and parent-teacher conferences. However, in 2014 when I first returned to Bir to teach English to young monks who were not receiving the same educational opportunities I was, I came to see my circumstances in the U.S. as an opportunity to help myself and others. This experience inspired me to continue pursuing my growing interest in medicine, so in 2017 I returned to Bir to volunteer in a clinical setting.

As I headed to the clinic, the comforting familiar smell of cow dung filled the air. When I entered the clinic, I was surprised to see my mother’s friend Kunsang. This vivacious lady who owned the local vegetable stall now looked timid and defeated, unable to convey her symptoms to the volunteer doctors. Equipped with the ability to speak Tibetan, Hindi, and English, I understood the nuances of her language and translated it to the American doctors accordingly. As I translated, the look of relief on Kunsang’s face filled me with a sense of purpose. This rewarding experience furthered my desire to practice medicine and reduce barriers to health. Thus, during the following two summers, I continued to volunteer at the Bir clinic as an interpreter to help build cultural bridges between the Tibetan and Indian patients and the volunteer physicians.

Reflecting on my experiences, I came to realize that physicians transform and exemplify the role of science to ameliorate human conditions in our societies. But just as it is more advantageous for our fingers to be different lengths to optimize the functionality of our hands, the same is true for physicians from different walks of life contributing to the welfare of our increasingly heterogeneous communities. Through my own upbringing in an underserved Tibetan refugee settlement, I have recognized the indispensability of decreasing barriers to health in vulnerable populations. During these turbulent times, we are beginning to grasp the interconnectedness of our world—we are seeing how global health is affecting us at the individual level.

Medicine is the perfect intersection between science and service. Physicians meet individuals at their most vulnerable states, where generating non-dualistic compassion—compassion that is all-pervasive and looks past the veil of divisive factors—is of utmost benefit. Our world does not have a shortage of intelligence or talents. However, as we look across the world, our greatest problems arise as a result of a lack of compassion fueled by thinking only of one’s own self-interest and beliefs. The irony is that due to the interdependent nature of our world, the welfare of the world is in our self-interest. This is especially evident in this day and age. No matter how different our values and perspectives may be, every single one of us shares the same core wish for long-lasting happiness and peace of mind, while also sharing the same aversion to unhappiness and suffering.

Reflecting on these shared human sentiments has helped me to develop a warm-hearted attitude toward others. It is these values that will guide my career in compassionate ways to help me strive toward innovation and excellence for the welfare of patients and, consequently, our communities. Having seen the detrimental consequences of inequitable healthcare in my community, I understand the importance of humanism in medicine. By providing quality patient care and reducing healthcare barriers, I aspire to become a physician who eases suffering and promotes health in diverse patient populations through openness, compassion, and culturally competent care.

"Having the guts to say “I don’t know” can be refreshing."