Orion is one of the largest and brightest constellations in the sky. It is a cluster of stars each unique in their size, name, and color. They are precisely positioned to yield the image of the mighty Hunter. Alnilam, Mintaka, and Alnitak constitute Orion’s belt, Hatsya frames Orion's sword tip, and Meissa is Orion's head. I, like Orion, am an embodiment of stars. However, my stars are not balls of gas but are the people, values, beliefs, and experiences in my life. They are my parents, grandmother, mentors, women of color, marginalized communities, first-generation college graduates, and others who have influenced my life. My stars will not reflect a mighty hunter, but a mighty physician. 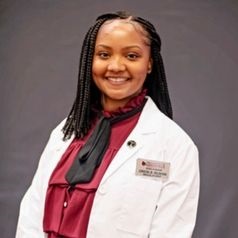 I, Orion the soon-to-be physician, was born and raised in Louisville, Kentucky. I am the only daughter among my two parents and stepfather. They are my Alnilam, Mintaka, and Alnitak—my Orion’s belt. However, there is one star quite different from the rest. Rigel is the brightest star within Orion, and it represents my late grandmother, LaVerne Syndor. My grandmother became my guardian when my father fell victim to the prison system, leaving me to be raised in a single-parent household. Due to a lack of income, my mother thrust herself into her work as a beautician. When my father left, I was a 3-year-old toddler, but when he returned, I was an 11-year-old pre-teen. As a toddler, I had a vague idea of my dad. I knew what he looked like, how he talked, and who he was to me, but I did not grasp the concept of what a father was. I knew that I did not have one but needed one.

During his seven-year absence, I found myself in tears while longing for my father. I saw him occasionally but in an unideal environment. I can recall waking on Saturday mornings to travel to visit my father. My mom would bring her clear purse filled with quarters as we rode for hours or crossed state lines to places like Georgia. As a child, this felt like a vacation to me. I would be filled with joy and excitement to go to a penitentiary. Once we arrived, we would go through security like that of TSA, and proceed in a single file line to the visitation room. There, we would pick a table and wait for him to come through the electric door. While visiting, we would eat plenty of junk food from the vending machine and play board games. Sometimes there was even a playground. I was in bliss for our few hours together, but that ended when my dad had to go back through the electric door.

My father and I missed the “Father and Daughter dances” and “Doughnuts with Dad.” However, absent fathers are a familiar experience within the Black community. As I would eat breakfast in the cafeteria on the morning of “Doughnuts with Dad,” I scanned the room and found very few fathers. In addition, many of my classmates were also fatherless due to them being incarcerated, deceased, or simply absent. It was in those conversations with my peers that I found comfort in knowing that I was not alone, and through this struggle, I could identify with others. This was one of the many challenges that I was exposed to as my grandmother raised me in the West End of Louisville. This part of town's life expectancy is 10 years less than those living in other zip codes within Louisville. I grew up surrounded by food deserts, crime, drugs, alcohol, segregation, poor health, and little opportunity. Of these, poor health is the one that I was overly exposed to.

My grandmother was a diabetic, and as a child, I watched how diabetes caused her health to decline. She spent most of her time in a hospital bed, injecting needles into her abdomen, suffering from arthritis, failing kidneys, or healing from strokes and heart attacks. I was the only 10-year-old I knew who was allowed to prick someone for blood samples to measure blood sugar. My grandmother taught me courage, strength, and perseverance. By becoming my first patient, she was able to support my dreams of becoming a physician. Unfortunately, my grandmother passed away on Aug. 17, 2019, due to her declining health. She will not be able to witness my white coat ceremony, but I know she will be there in spirit, chanting “Dr. O” from the heavens.

I marveled at the relationship and trust each patient had for their provider. By developing this rapport with their patients and families, Dr. Gaines was able to introduce generational health into the Louisville community. I’ve never experienced care like this, even in my own experiences. Many of my providers barely looked away from their screens, let alone knew more about me beyond my anatomy. The patients seen by Dr. Gaines are of the minority, underserved, and marginalized communities that I identify with. As I would triage patients and sit in on their visits, I began to see myself in many of them.

I developed a special care for pediatrics over the years that I’ve spent at Dr. Gaines'. It became clear to me that pediatrics was my focus, and underserved communities are where I wanted to practice. I loved singing “ABCs,” “Baby Shark,” and “Apples and Bananas” to the patients to calm them down before conducting a complete blood count. I would play peek-a-boo with the younger patients to distract them from their immunization shots. I’ve had talks with older patients about school, prom, college, and other topics. Shadowing, working for, and interning at Dr. Gaines and Associates helped me identify where my stake in medicine could possibly lie.

Orion the physician, like Orion the hunter, is not composed of a single ball of gas, but a cluster of stars. There is an Alpha Orionis, a Beta Orionis, Orion’s belt, and many others. Likewise, I don’t represent myself, but my parents, my late grandmother, underserved communities, poverty, African-Americans, women, first-generation college students, and other marginalized groups.

However, when I become Orion the physician, I will gain more stars, my patients. I plan to go beyond the four corners of the doctor's office to serve my patients. I will incorporate their disparities, disabilities, lifestyles, and limitations into health plans created just for them. As Orion the physician, it is my duty to ensure the world is a healthier place, and I plan to do so by advocating for health equity, improved patient-physician relationships, and education.

Save money on the big, boring stuff so you can have something left over for life’s little pleasures.