Second place in the contest was good for $14,444 in cash (30% of the cash pot after the 4th/5th place cash was paid out.) She will also receive her choice of either Fire Your Financial Advisor ($499 value) or the 2018 Physician Wellness and Financial Literacy Conference ($299 value).

Like our third place winner, Yidan Xu is also an immigrant and writes about her upbringing. It makes Mr. Money Mustache and other FIRE bloggers look like a spendthrift. I hope you enjoy the essay.

Life is a Journey of Exploration

I’m an immigrant and my life is pretty ordinary: I live in a condo, drive a cheap Japanese car, have a dog and go to a graduate school. I consider myself very lucky because this kind of ordinary life is what I once dreamed of and saw from my neighbor’s black and white TV when I was a little child. Unlike other applicants who were born with this kind of life or even better, I trudged through a long, winding way to reach it.

Born in rural China, I grew up in a poverty-stricken family. I was lucky that my parents didn’t give me or my twin sister away because we were girls and our family was so poor. There were people that suggested giving one of us away so the financial burden would be reduced and they may have a chance of having a son in the future. At that time it was not rare to give away baby girls. The one-child policy allowed couples to have a second child if the first one was female in rural areas. So I’m grateful that my parents didn’t abandon me even though they were really poor and could barely feed themselves. 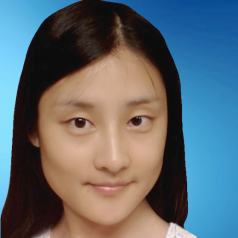 I lived in a stone house with no tap water and toilet until I was 10 years old. I didn’t know what a TV was until I was 8 when my neighbor bought a tiny black and white TV. Then I began to visit my neighbor every day after school. I learned things such as a building could be as tall as a hill or even a mountain, a toilet could flush water, and people drove cars. The world on the other side of the earth was so fascinating to me that I secretly wished I could live a life like that one day.

Because our parents couldn’t afford a second set of things, my twin sister and I always shared everything from toys, books, and beds. There is a picture of me and my twin sister when we were 1-year-old. I always think it is a hilarious picture because my sister was holding a used plastic toy and I was holding a cabbage leaf as a prop. We couldn’t afford a second toy. I still remember vividly when my after-school math teacher asked why my sister and I were sharing a textbook with each other. Every student should have his own textbook. The whole class was staring at me and my face turned red, but I couldn’t say a word. Telling them that another $2 textbook was not really affordable for my parents would be a stab to my pride. I felt so ashamed that I wished I could find a crack on the ground to hide in that moment.  After going back home, I cried and told my parents what happened. They said they would talk to the teacher but I refused to go back to that after-school class unless they bought me a new textbook. At the end, they agreed but years later it became one of the things that I regretted most in my childhood. $2 was enough to buy two days’ food for the whole family, and I wasted it to uphold my naive pride. This incident taught me to only be ashamed of something that’s worth being ashamed of.

Poverty brought me confusions, struggles, and pain. However, it also made me optimistic and pushed me to seek alternative paths to happiness. I didn’t have a real boat of any kind, so I drifted in a wood basin on a used tire tube in a flood. I couldn’t afford going to swimming pools, so I swam in a river while catching fish at the same time. I couldn’t afford visiting amusement parks, so I went to hills and farms to catch butterflies and pick wildflowers and fruits. I taught myself so many things including how to swim, how to catch small fish with bare hands, and how to identify edible fruits.

Growing up in poverty, I became practical, resilient and creative. I learned to overcome adverse situations and financial challenges rather than whining about them. I slept on a plywood board for a couple of years when I lived in Phoenix. As a good hard mattress was too expensive, I decided to buy a $25 plywood board instead from Home Depot and put a layer of blanket on it for cushion. When the weather became warm, I would put a bamboo mat on the top. It turned out to be perfect. A plywood board is much cooler than a mattress, so I didn’t have to set the temperature of the air-conditioning really low to survive the Phoenix summer nights of 110 F, which saved me some money on electric bills. Also, most of my furniture, tableware and cooking tools were bought from yard sales. I spent the least amount of money to get the best life I could have.

Nobody would choose to be poor. I can’t choose where to start, but I can choose which route to go and where to finish. I have been a hard-working student because I know that good education is the only ladder that allows someone like me at the bottom of the social pyramid to climb higher. I studied hard since I was a child and remained at the top of my class, which allowed me to be admitted by one of the best universities in China. Now I’m studying speech-language pathology and working with people with communication impairments. Knowing how rare speech pathologists are in China and how desperate the parents whose children experiencing communication problems are, I have been writing articles about speech and language in my blog since mid-March this year. To date, I have written 22 articles and my blog has attracted 572 subscribers. I answer my readers’ questions for free during spare time. It is fulfilling for me when my readers thank me for helping them out. Also, I am a volunteer at an Aphasia Friendship Center, where I help people with aphasia on Fridays. I can’t save people’s lives like doctors, but I am proud that I can alleviate people’s pain for not being able to communicate effectively.

My life is a journey filled with struggles, hardships but also adventures. I don’t regret any major decisions I have made so far in life, including leaving China and coming to the U.S. alone, changing my career and going back to school. With courage and persistence, I have made the best out of what I have.

I’m proud of what I have achieved today. The world is so big and there is so much for me to do and to see. I would appreciate if you grant me this scholarship to support me financially and emotionally, so my journey of exploration would be a little easier.

I married a gold mine. My spouse is thrifty.