When I left home in Alaska at 18 to go away to college, I was not able to take much with me and have not spent a lot of time there since. So when I left, I boxed up my “important stuff” and stuck it in the attic. Two decades later, my parents got sick of storing my stuff and brought it down with them when they came to visit. To Katie's chagrin, I took those taped up boxes and shoved them in a closet where they have sat for a few more years. When we moved out to do our big renovation, I didn't have time to deal with them. But when we moved back in, it was time to open them up.

So I gathered the kids around and we went through a time capsule of my life. A lot of it was really fun. I was probably throwing away 95% of it but then they started claiming things. Favorite toys, books, and stuffed animals found their way to my youngest daughter's room. Hockey jerseys and my baseball card collection were grabbed by my son. It was a really fun couple of hours.

It is a fascinating experience to look back and see what you thought was important a quarter of a century ago. Let me share a few examples of some odd stuff I found.

One of the funniest experiences came from a picture of me at 12 or 13 years old on a successful Dall Sheep hunt with my dad. My 13 year old asked me “What are you doing with that sheep?” What a different life they lead than the one I had as a youth. I don't know if she thought I was snuggling with this full curl ram or what.

One of the more interesting finds during this experience came from some folder I had to put together “About Me” at the end of 8th grade. My 16-year-old thought it was fascinating to find a list of “Life Goals” I completed as part of this project. She said, “You were really ambitious.” That's probably true, but she was also impressed with how many of the life goals I had actually accomplished. You'll probably find the life goals list as funny as I did. Here it is: 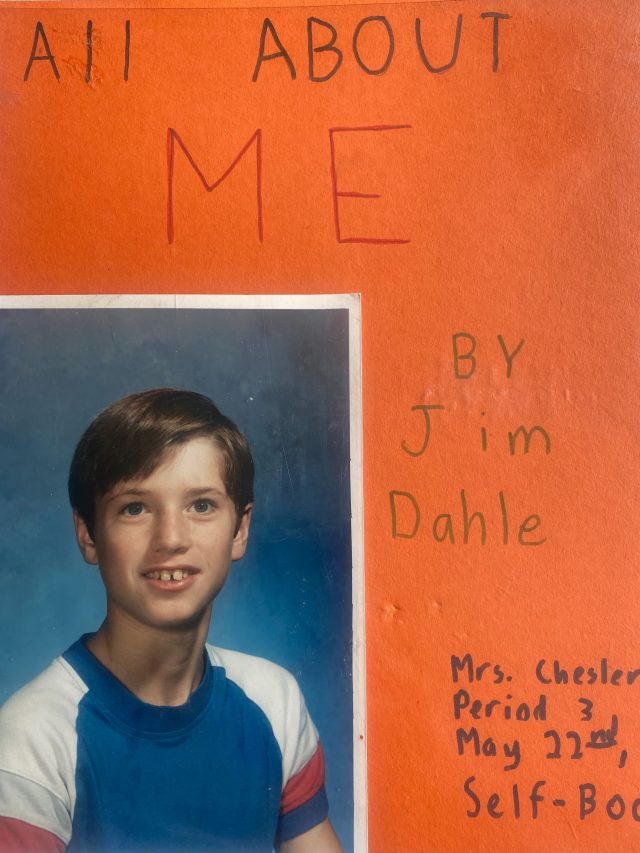 Not bad, 14 out of 20 on my life goals list and I'm only 45. I think there are a few interesting lessons here.

The first is that planners accomplish stuff. If you plan a trip, eventually that date will come and you will go on the trip. If you never plan the trip, the trip never happens.

The second is that what was important to you in one decade of life will not necessarily be important later in life. I only left the State of Alaska four times before leaving for college. Traveling was clearly pretty important to me back then. Now, having practiced medicine on four continents and visited nearly all of the states, it is much less important to me.

The third thing that I thought was funny to look back on was my view of what being rich was–making a lot of money and owning a large house. I clearly had at least some financial ambition, however misguided it might have been. Before you scoff at the $80,000 figure, bear in mind $80,000 in 1990 is the equivalent of $195,000 today.

Seeing that list actually helped me to feel a little better. You see, going through my stuff made me feel kind of horrible. We spend so much of our life acquiring so much stuff. But seeing how little I cared now about my most precious possessions from 25 years earlier was pretty sobering to me. I suspect I'll feel the same about my current possessions in another 25 years. It's a good reminder that hearses don't have trailer hitches and your experiences and relationships are going to be worth a lot more to you than your stuff. Seeing the list of life goals reminded me that I have had a lot of wonderful experiences and gotten to know a lot of wonderful people including those four kids in addition to acquiring a bunch of worthless stuff.

What do you think? Do you have a list of “life goals?” What is on it? What are your thoughts on your precious possessions from decades ago? Comment below!

Thanks for sharing your trip back in time!

1. It’s awesome you were taught goal setting from a young age! It’s so important. I still have a scrap of paper with all of the goals that I wanted to accomplish in residency. I completed them all because I wrote them down and kept my eyes on the prize! Unfortunately, learn about personal finance was not on there…
2. An inside the park home run totally counts!

Don’t forget the other major Canadian cities of Winnipeg, Saskatoon, and Regina…lol….

What was the 3 inch headline in the anchorage paper?

Look up the date. You’ll figure it out.

Wasn’t that the headline that was just “WAR”?

It actually read “BAGHDAD BOMBED!” I think it was impactful to me because I was 16 and had never really known my country to be at war. Very different from kids today where we have been at war continually for the last 19 years. They have never known their country not to be at war.

Your life goals contained only two possessions, and even then it could be argued that only one is material (the big house) and the other is more experiential and relational (the business). It seems your real desire has always been on experiences and relationships.

It’ll be interesting to see if this point of reflection changes your financial outlook or spending moving forward.

I had an awakening moment when I had to clear out my dad’s house after he died. 60+ years of his memories, plus our kids’ stored stuff. It was a turning point in how much was spent unknowingly on ‘things’ if one is not attentive.

Awesome…might have to sit down with my 8 year old and have him write down some life goals….can update it once a year 😉

Always funny seeing pictures of your classmates again. Somewhere in Anchorage my mom has a similar box. She hasn’t sent it down yet.

Or did you graduate before then?

Well, you might have been on the ice. I was probably on the bench. 🙂 But I was on the state championship team in 1993 and I do recall whooping Dimond that year. I only scored 3 goals that year, but one of them was really big (sudden death overtime in state semi-final). The newspaper called me the “unknown, low-scoring senior”.

That was strong era for your side of town for sure. Also, a memorable head coach!

And one of several whoopings our squad received that year. I was just scrapping for varsity ice time myself.

We at least crossed paths at Ben Boeke it sounds like, and definitely shared some teammates.

Thanks for posting! Hockey is going through a lot of changes up there with the loss of UAA/Aces.

Sad to see hockey going downhill up there. I looked up that coach on Facebook the other day. Looks like he turned his life around when he got out of prison.

Sensible investors rely on themselves. A strategy of professing ignorance and handing assets to a trained professional invites failure