Third place in the contest was good for $4,815 cash (10% of the cash pot after the 4th/5th place cash was paid out.) Carlos will also receive his choice of either Fire Your Financial Advisor ($499 value) or the 2018 Physician Wellness and Financial Literacy Conference ($299 value).

In this essay, Carlos tells his life story up until the point of his entrance into medical school. I found it touching for two reasons. First, Carlos's father was the first in his family to graduate high school. Mine was the first to attend college and members of my generation are the first to obtain any sort of graduate/professional degree. Second, at the exact time that Carlos's father was crossing the border in the hands of a coyote, I was spending two years of my life full-time trying to improve the lives of many of those crossers. I have lost touch with many of those I met and assisted but can't help but wonder if Carlos's father was one of them. Later, I cared for many more as a resident in Tucson and even today in Utah about 10% of my patients speak Spanish primarily. While immigration continues to be a very political issue in our country, I never had any doubt what I would do if I were in the same situation as Carlos's father. It's awesome to see what can happen in the second generation when the first one will make any sacrifice for their children's success.

Picture a house molded out of dried mud. Picture no running water and no electricity. Imagine having to reshape your home after a hard rain or having to bathe in a river. Those are the conditions I was met with as I visited my mother's childhood home for the first time this past year. My father was the first one in his family to graduate high school. Directly after, he spent his days working two jobs and studying all night in order to put himself through college. One college graduation, one marriage, and two kids later, my parents had managed to turn their lives around against all odds. However, they both knew that in order to give their family the best chance at succeeding, they would have to leave Mexico. 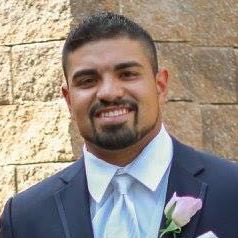 In 1994, my father left everything he ever knew, all of his belongings, and his family behind to come to the United States in search of a better life away from drugs and corruption. Without any knowledge of the English language he worked any odd jobs he could find in order to save up enough money to send for his family. One year later my mother packed up my six-month-old brother and I and put all of our lives in the hands of a coyote to take us across the border. It was in the fall of 1995, just before my fifth birthday, when we were finally reunited. What followed our reunion were many years of struggle. My parents both worked multiple jobs in order to try and make ends meet, but often times it was not enough. My father would spend many weekends and late nights doing odd jobs to supplement. I was five years old the first time I held a hammer in my hand. A five-year-old could not have been much help but I’m pretty sure my dad just wanted some company. Fast forward several years and my father decided to start his own masonry company. It was a huge gamble and brought on even more work for him. There were days he would work so late that he would be forced to use headlamps in order to be able to see, sleep for two or three hours, and start all over again. I was ten years old the first time he took me to the job site with him and gave me my first trowel, and ever since then I have spent every school break and summer working alongside my dad laying bricks.

When I was about to enter first grade my parents wanted to remove me from the ESL (English as a second language) program but faced fierce opposition from the school system. They were in and out of meetings with teachers and administrators trying to get me placed into all English classes. When my parents told them that they wanted us to integrate into the culture and that they felt that would give us the best opportunity at attending college in the future, they were met with laughter and ridicule. The school told them they were making a huge mistake and that “those kids will never be able to attend college”. In the fall of 2012, I was enrolled at Knox College and began my collegiate career. Four years later as I walked across the graduation stage I thought of that comment and felt a surge of pride as we proved all the critics wrong.

After graduation I was met with a harsh reality; my dream of becoming a physician was still out of my reach.  You see, I was still an undocumented student and furthering my education was not yet possible.  So I waited, and I went back to work.  I worked full time with my dad while working part-time as an ER tech and as an EMT-B all while trying to maintain myself ready to take the MCAT.  After two years I was finally granted permanent residency in the United States. As soon as the paperwork went through I signed up for the MCAT and began the process to apply to medical school. That following year I was accepted into Southern Illinois University’s medical program. Everything was finally coming full circle.

My parents left behind everything they ever knew with the goal of giving their children the best chance at a successful future.  Now my brother is entering his senior year of college, my sister is beginning her freshman year of college, and I'm entering my first year of medical school. It has been a long and bumpy road with many hardships along the way, but I think it is safe to say that they wouldn't change a thing. As I reflect on my life I realize that while I'm on the brink of fulfilling my dream of becoming a physician, I’m also realizing my parent's vision of giving us the opportunity to pursue our dreams, adding a whole new level of motivation. My path has not been the easiest, but it has been my path and has shaped and molded me into the person I am today.

“Without obstacles, there can be no triumph, without the joker, Batman would just be a weirdo in a bat suit” -Brandon Carter.

If you care about the price of the house that you bought, you bought too much house.