Finally, at the fourth grocery store I had rifled through that day, I spied a small container with spindly, red twigs in it priced at $17 per 0.06 oz. Saffron is the most valuable spice per ounce in the world. Each flower has three stigmas that are hand-picked, carefully toasted, and curated to become what we know as saffron. Tens of thousands of flowers are required to make one pound of saffron. The immensity of the labor required to produce this product is what drives up its price. 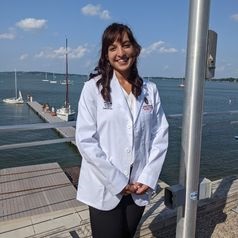 The ingredients for a successful paella de marisco are mussels, clams, squid, shrimp, olives, rice, onions, garlic, broth, spices, and yes, just a few twigs of saffron. Saffron is an essential ingredient of paella. So, I say that saffron is valuable instead of expensive because I buy it as an investment. I invest in those loved ones who I cook for. I invest in their continued health, strength, and future. This is a different kind of investment than The White Coat Investor usually talks about. So, let me tell you about my investment portfolio.

Growing up, my brother spoke different languages; ones only he understood. He transformed into different caricatures: the stoic, the goof, the violent one, the depressive one—somewhere was the one I had known when we were younger. He was artistic, tall, exact, and sensitive. He had multiple personas, seizures, and a collection of symptoms. The ingredient he was missing was a medication to balance out his overabundance of autoimmune antibodies. After more than a decade of being misunderstood, his new neurologist had found the answer, had found his saffron. His missing ingredient was the proper diagnosis paired with the proper treatment. They tried to balance out my brother by giving him high-dose steroids, used as immunosuppressants. His recovery was the closest thing to magic I knew at the time.

Later, my grandma, who helped raise me, suffered through a stroke and the ensuing hysteria and delusions. She would cry out at night and revert back to being a child, believing my dad to be her dad. The first diaper that most young women change is usually their child’s but mine was my grandma's. Just like in the children’s book “Love You Forever” by Robert Munsch, I felt a cyclical phenomenon happening. My Noni had taken care of me when I was a baby; now I was taking care of her.

Afterward, my dad survived two TIAs and then a tumor. Then, my grandpa suffered through pneumonia, a heart attack, and a diabetic foot wound. Then, my other grandma had a Lasix overdose. Sometimes, you don’t know you’re being called to do something until it happens again and again. Maybe it’s someone whispering your name over and over again, or maybe it’s frequenting the hospital to the point where the nurse knows your name.

What I came to realize is that my family’s missing ingredient was a doctor, and that mine is medicine. To me, medicine is akin to cooking in that there is a recipe (or protocol) to follow with various taste-testers (evidence-based studies) and a chef that titrates the ingredients (a doctor) with their team of sous chefs (nurses, techs, respiratory therapists, and so many more).

More than the engaging puzzles medicine presented, I started gravitating toward moments where people are trying to define who they are. By that, I mean, I listen a little closer to a 20-year-old man with schizophrenia trying to use grounding techniques to orient himself in the back of our ambulance. I lean into conversations with a stroke victim who is deciphering through their vocabulary for words of help. I examine emergent head CTs in the ER when we bring in a patient with head trauma.

A strong connection exists between mental health and the medical health of the brain. I am drawn to the coalescence of the two through a field that I didn’t once know existed: neuropsychiatry. This is a difficult discipline that I view as a structured training regiment and also a lens to frame mental disease. I believe somewhere in this integration between fields is a niche where I can help people who are often marginalized or ostracized by society to be seen, felt, and heard.

Just like how some grocery stores may not carry saffron because of its cost and the lower probability of receiving regular shipments, I believe, too, that healthcare professionals treating the nexus between mental health and neurological health is rare and often out of stock. Many times a patient has to navigate the health system just like an avid shopper might have to drive to four different grocery stores. Many times they have suffered through years of illness before a diagnosis or a treatment can be found. Many times patients are investing in their doctor as one would invest in their family. Many times I see bits and pieces of my family in my patients. And all the time, I want to protect my family and my patients.

Medicine is how I plan to invest in my ability to do so because I know that everyone is someone’s family—and without them, life would be like a paella without saffron: valueless.

Become the best in the world at what you do. Keep redefining what you do until this is true.