The WSJ posted this graph in an article recently: 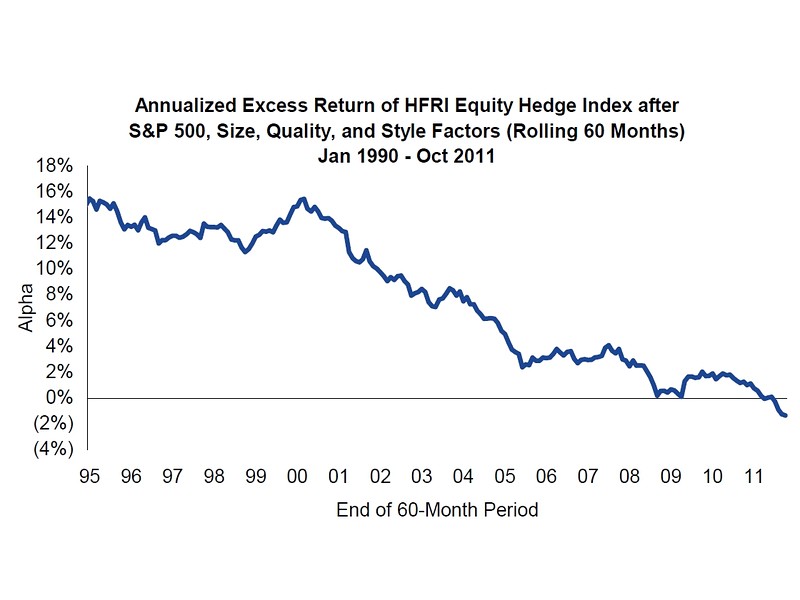 That's an awfully concerning trend.  Apparently, as recently as 2004 hedge funds were, on average, adding 5 or 6% “alpha” (return due to skill) on to their returns.  That has since not only disappeared, but most recently become negative.  This return, of course, is pre-fee.  Hedge fund fees are classically “two and twenty” or 2% of assets managed PLUS 20% of profits.  That's a huge hurdle to get over, and it looks like it can't be done any more.  This is no surprise to those who have followed the mutual fund industry.  The real surprise isn't that they can't do it anymore, but that they ever could.

Caveat: Keep in mind that this data only comes from hedge funds that report their data and it is equally weighted by fund, but you'd think that those factors would work against the data and further prove my point.  Who most wants to report their data?  Those whose data makes them look smart.  And small funds likely have better returns than large bloated ones, so the asset-weighted data likely looks much worse.

If you're not wealthy yet, but want to be someday, never purchase a home that requires a mortgage that is more than twice your household's annual realized income.