Survival bias is what happens when some of the data that should be in a data set is deleted. The “surviving” data paints the picture as being better than it actually is. This is a real concern when you look at actively managed mutual funds.  Rick Ferri, in his new book, The Power of Passive Investing, displays this chart (used with permission.)

Figure 1: Twenty Years of Active Equity Funds (based on 100 funds) 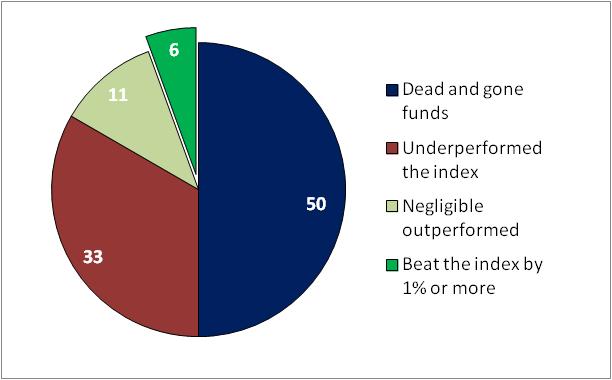 If you do not account for survival bias, YOU'RE MISSING HALF THE DATA.  That's such a huge effect.  Over 20 years, it appears that 17/50 (34%) of actively managed funds significantly outperformed their respective index.  but if you look at ALL the data, that number quickly shrinks to 17/100 (17%).  More depressingly, if you only consider those that significantly outperformed the index, that number is down to 6%.  I don't know about you, but I'm humble enough to realize that the odds of me picking the 1 fund out of 20 that will significantly outperform is too low to justify the activity.  I'd be doing well to pick one that survived for 20 years.

There was another study done in 2006 by Savant Capital Management looking at the Morningstar database.  Basically, they inserted all the now-extinct funds back into the database to determine how much worse that would make the average actively managed fund look compared to the indexes.  They examined the time period 1995-2004 and found that survivor bias accounted for an additional performance gap of 1.3% per year.  Add that on to the already significant performance gap (heavily influenced by additional costs) and you have a real uphill battle for active managers.  1.3% a year is huge.  Consider two portfolios, one which grows at 4.7% real a year and one that grows at 6% real a year.  If you add $30K to the portfolio each year for 30 years, the one growing at 6%/year is worth 25% more, or nearly a half million bucks.  I don't know about you, but I can think of a lot of things I could do with an extra half mil.

Most brokers service customers the same way in which Bonnie and Clyde serviced banks.