I recently spent a week in one of my favorite places on Earth, the Yosemite Valley.  There's a picture of it at the top of each page on this blog.  Climbers the world over dream of one day going to “The Valley” to climb.  Beautiful weather, spectacular waterfalls, classic routes up solid granite, camping underneath huge shady trees…there's nothing better.  Climbing Half Dome or El Cap at some point in their life is a rite of passage for most serious climbers.  I managed to get in enough climbing to leave exhausted and spent some good times with family and friends.  Even my seven year old was able to do her first multi-pitch climb, a 400 foot wall.  Most importantly, I came home with both thumbs (unlike these guys there at the same time– kudos to you guys out at San Francisco General for fixing this guy up) since, as you'll recall, my disability policy doesn't cover climbing injuries.

But the trip got me to thinking about a phrase that's tossed around a lot by climbing bums and ski bums the world over: Livin' The Dream.   It's typically thrown out by a 45 year old guy living out of 25 year old van who works as a ski lift attendant in the Winter and a housekeeper in some resort town in the summer.  For those of us who only make it up there for a week's vacation it seems to be an ideal life.  I tease my wife sometimes that I should have gotten a VW van and spent my 20s in Yosemite instead of medical school and residency. 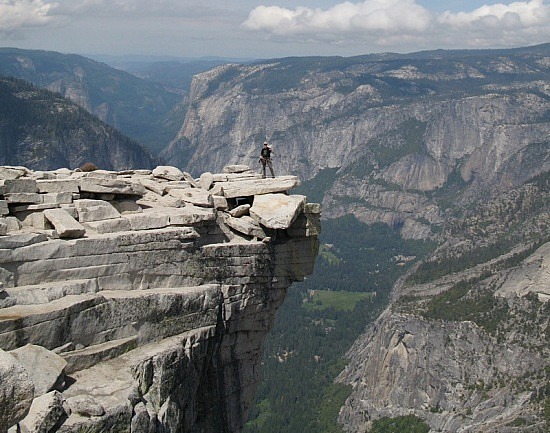 But reality is a different story.  The real dream is to have the financial freedom to do anything (and maybe, if you're good, everything) you want.  Live in a nice neighborhood, drive a nice car, support a family, have time to spend with them, retire early, and yes, spend a week in Yosemite or Aspen from time to time.  The best part is when you go to Aspen, you'll be able to stay in a nice condo, eat good food, and ski on nice gear, without ever having to stand around in the cold brushing snow off the chairs for others on powder days.

Far better to be poor in your 20s than your 50s.  As a physician, you've already won “the game.”  All you need to do now is not throw it away.  Save 20% of your income every year, have a reasonable, low-cost investing plan, and enjoy the rest of it.  Don't do anything stupid and success is right around the corner.  Now that's what I call Livin' the Dream.

it is so hard not to do something stupid. with so many financial advisors preying on us, most physicians will take a hit at some time. it takes time to understand why whole life, active investing, and whatever soup they are serving today, doesnt work. Most of us fall for some of this garbage.

Singer Rihanna nearly went broke after overspending and sued her financial advisor. The advisor responded: “Was it really necessary to tell her that if you spend money on things, you will end up with the things and not the money?