I recently had the opportunity to speak to a large group of emergency physicians. I do this periodically and really enjoy it, especially when it can be combined with me getting some CME and getting some turns in at a world class ski resort. However, it made me a little depressed when I realized just how much more work there is to do out there as far as educating physicians about personal finance and investing.

This was a conference for a state chapter of the American College of Emergency Physicians (ACEP). As regular readers know, I have been writing a column in the throwaway journal (ACEP NOW) for ACEP for over a year. When the emcee for the event introduced me, he asked how many of them had heard of The White Coat Investor. It was less than 2%. Total fail. I'd feel a little better about that if I were speaking to neurosurgeons or endocrinologists, but after 4 years of blogging, a best-selling book, and writing a column in a magazine ALL of the attendees of this particular conference receive every month, they hadn't even heard of the site, much less learned anything from it. 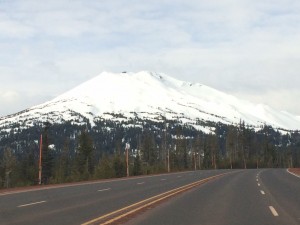 Name the mountain for bonus points.

I really enjoy getting out and meeting random groups of physicians. Interacting with blog readers through emails and comments gives me a very skewed view of doctors…skewed for the better that is. Doctors who find the site are not only at least a little bit educated about this stuff, but also interested. When I speak to random groups at CME conferences, I get a group that is far more typical of physicians. The results aren't necessarily pretty. They were all very nice and appreciative (wouldn't you be if this was the first time you heard this stuff?) but hearing about their personal financial issues sometimes brings a tear to my eye. I'm going to discuss the stories I heard from several of them in an effort to educate, but definitely not to poke fun at these docs or make light of their situations. I have changed all the details enough to make them completely anonymous, but not so much that the lessons their stories teach can't be learned.

Physician # 1 Time to Retire But No Portfolio

This doctor is in his early 60s, still in good health, and enjoying his practice. He makes around $300K a year. However, he mentioned to me that his portfolio was about $350K. That's right. After 3 decades of work, he has a portfolio approximately 1X his annual salary. When confronted with physicians in this situation, I try to be positive and point out all the great ways they can still improve their financial situation (keep working as long as you can, delay SS to 70, really start saving like crazy, turn any non-income generating assets into income generating assets etc.) And it's true that it really never is too late to start being smart about your finances. But at the same time, it's hard for me not to think, deep down inside, that the game has already been lost. This doctor is no longer playing to “win”, but rather to lose by the least amount possible. 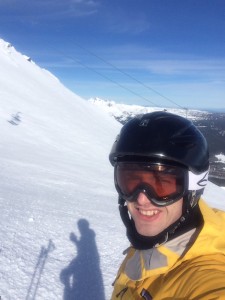 If you didn't get it from the first picture, here's a selfie from the top

How did he get into this position? Well, in 2008, when he was in his mid 50s, he had an $800K portfolio. Great! That's a doc who can still win. He'll probably double his money between 55 and 65, add some more contributions, and retire with a couple million, which combined with SS, will provide quite a nice retirement. However, when the market crashed and his portfolio value dropped to $500K, he got out. Then he decided to take some time off and spent some of that money. Then he apparently never got back into the market. So 9 years later, he has less than half as much money.  So many lessons there.

Physician # 2 Too Much House

This is a doctor also in his 60s, married, and planning to retire shortly. He is in a far better financial position than physician # 1. He has a portfolio of around $1.3M and two homes, a $400K main residence and an $800K vacation home that is occasionally rented out, providing about $10K per year in income. Net worth wise, this couple is doing great. A net worth of $2.5 Million should be plenty to provide a reasonably comfortable retirement. However, not in its current form. He and his wife have been debating selling the 2nd house in order to boost the portfolio. However, his wife wants to keep the vacation house in case the market drops again. She would feel terrible if she sold something they both really enjoy and then lost half the value of it in a market crash. There were several great learning points here:

1) $10K of income on an $800K property is a terrible investment. In fact, it is such a terrible investment, that its investment qualities can essentially be ignored and it can be treated as a consumption item. Is that item a little cheaper than it otherwise would be? Sure. But it's still a consumption item. Consider that typical maintenance costs on a home are 1-2% of its value every year ($8-16K) and that property tax (1.5% per year in this area) is another $12K.

3) Real estate markets can drop 25-50% just as easily as the stock market. Rents tend to be more stable than property values, but this isn't exactly a rental property.

4) Vacation property can be rented very easily. You don't have to buy it. He could go there for a week every quarter for the rest of his life and never get anywhere near $800K.

Again, this couple isn't in a bad position at all, but they can certainly reallocate their assets in a manner that will likely bring them more happiness, and certainly bring more financial security.

I also spoke with a soon to graduate resident with a large debt burden ($300-400K) who is moving to take a job in one of the areas of the country I often describe on the blog as a “financial toxic wasteland” due to a high cost of living, high taxes, and low physician pay. His question was how long he should wait to buy a home as his spouse was pressuring him a bit to buy sooner rather than later. There were two useful learning points from this discussion.

1) This is the wrong question to be asking. The question should be how this couple can get to a net worth of zero as soon as possible. The way to do that is to live like a resident, refinance the student loans, pay them down like crazy, and max out retirement accounts. Hopefully within 5-10 years, the student loans will be gone, they'll be in their dream house, and they'll be millionaires. That leaves the details of how to get from here to there, but the key is to live far below their means for a few years after residency.

2) I don't have a problem with an attending in a stable job buying a house. If he has tons of high interest student loans, it can even make more sense to use their cash to pay down their loans rather than using it for a down payment. That means a “doctor mortgage” (0-10% down but no PMI, just slightly higher rates and/or fees.) Since most docs change jobs in the first year or two it seems wise to me to wait at least 6-12 months to make sure you love the job and the job loves you before buying that first post-residency house. But there's no reason you need to wait 2, 3, 5, or even 7 years to buy a house. 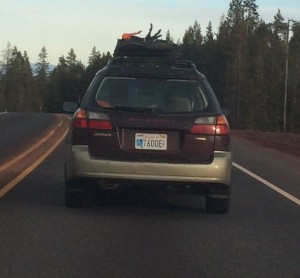 A car I followed down the road on this trip. See if you think it's as funny as I do.

You don't have to wait until the loans are gone or even until they're paid down to a certain point. What you do you have to do, however, is live far below your means. So whether you are renting a house or buying a house, it needs to be relatively inexpensive (you know, something you could afford as a resident) so you can redirect that income toward building wealth (paying off student loans and maxing out retirement accounts.) If your future financial plans include a “forever house” or an “attending house,” the time to buy that isn't 2 months before you graduate from residency with $400K in debt.

Interacting with “real life physicians” rather than those who find their way to a personal finance and investing blog can be very educational for me and for those who frequent this site. We spend far too much time arguing the merits (or lack thereof) of whole life insurance, backdoor Roth IRAs, and the home office deduction and far too little making sure our colleagues learn the ultra high-yield basics like:

1) Save in your retirement accounts

6) Save a significant percentage of your income (15-25% of gross) for retirement starting with your graduation from medical school, or at least residency.

7) If you're not going to take the time to learn how to do this stuff yourself, hire a competent, low-cost advisor.

What do you think? What have you learned from talking to colleagues with little knowledge/interest in personal finance and investing? How can we get “the message” out to the rest of our colleagues? Comment below!

I think sometimes it takes the guts to realize you’ve been burned. Physicians, like most people, don’t enjoy feeling like fools. So if 80% of physicians are being taken to the cleaners by their “advisors”, then the enablers make them feel better than the colleagues who would point out their errors. Personally, it took a really bad encounter with an “advisor” to make me take a hard look at my finances. Once I imported everything into mint.com, it flagged all of my advisor fees, which really got my attention. I just wish I’d be proactive earlier–I don’t care for my disability policy much, but am years into it at this point.

What I like best about your blog is that it is empowering. It felt great to take control over my finances, and the comments reveal a pretty supportive community. Focusing on the positive aspects, rather than shaming the victims of predatory financial companies, is what makes me come back on a regular basis.

I think there’s a lot of inertia too, so the people most likely to heed your warning and take charge are those who haven’t yet bought the big house and the 2 cars and the big vacation all while ignoring debt paydown and retirement planning. I thankfully stumbled across WCI as a resident knowing only that I had a lot of med school debt and had chosen a specialty that was going to pay a lot less than my med school buddies. I read Random Walk and Millionaire Next Door doing NICU call after midnight rounds. I was lucky that I was early enough in the process not to have made any bad decisions. And lucky enough that I had some quiet time. Now with a practice and a growing family learning all of that from scratch might seem daunting.