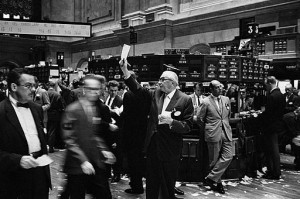 I had a doctor ask me a question that is often asked by relatively novice investors.  He showed me an update he'd gotten from his investment manager that indicated he now owned a new mutual fund.  He wanted to know what I thought of it.  I took a look at the name of the fund and told him what immediately came to mind:

The next morning I got to thinking that the question might make for an interesting blog post, so here it goes.

The fund was Gabelli Small Cap Growth Fund.  I don't know what else this particular doctor holds in his portfolio, nor do I know the reasoning behind why the manager decided to add the fund to his portfolio now, but I've got a pretty good guess.  After preliminary review of the fund, we learn that it is a Morningstar 5 star fund for the last  5 and 10 years.  If you compare it to the Vanguard Small Cap Growth Index Fund or (once you realize it is a small blend fund, despite the name) the Vanguard Small Cap Index Fund, you see this:

You could have had better performance the last 5 years without any effort at all just by buying the index fund.  Obviously, during the time period between 1997 and 2007, you would have been better off with the Gabelli fund.  But none of this matters.  We're not looking at buying this fund in 1997, nor in 2007.  We're looking at buying it in 2012.  What are the odds of it outperforming going forward?  In the past it was about 50% (It has beaten the index fund 5 out of the last 10  years).  That seems an awful lot like flipping a coin.  So what does predicts future performance?

Expenses Predict The Future Better Than Past Performance

The data is pretty clear on this.  Past performance doesn't predict future performance.  This is such an investment truism that mutual funds are required to print it in the prospectus.  Morningstar's star system certainly doesn't predict future performance, which isn't surprising given that it is almost entirely based on recent past performance.  It turns out that the only real predictor of future mutual fund performance is the expense ratio.  The cheaper the fund, the more likely it is to perform well in the future.

So how cheap is the Gabelli fund?  Not very cheap at all at 1.44% per year.  Especially when you add on the investment management fee of 0.8%.  This mutual fund manager needs to not only beat the index, but needs to beat it by 2.25% per year for this doctor to be better off hiring an investment manager to choose a mutual fund for him.  That's a tall order for anyone, at least in the long-term.  Mario Gabelli probably is a good fund manager (the alternative hypothesis being that he got lucky), but he isn't that good.  Heck, Warren Buffett isn't that good these days.

Look Under The Hood

The other thing that bothers me about this fund is it's name.  It's called a small cap growth fund.  If you read the fund objective, it says this:

“Under normal market conditions, the Fund invests at least 80% of its net assets in equity securities of companies that are considered to be small companies at the time the Fund makes its investment. The Fund invests primarily in the common stocks of companies which the Fund's investment adviser, Gabelli Funds, LLC (the ‘Adviser'), believes are likely to have rapid growth in revenues and above average rates of earnings growth. The Adviser currently characterizes small companies as those with total market values of $2 billion or less at the time of investment.”

However, according to Morningstar, this is what it actually invests in:

The truth is that's probably a good thing for the manager's career.  It turns out that small growth hasn't been a great sector of the market to invest in over the last oh…..8 or 10 decades.  There's a lot of speculation about why, but it generally comes down to the lottery effect.  Although there are a few small growth stocks that live up to expectations and grow spectacularly, the vast majority do not and on average, the performance is poor.  William Bernstein, MD, put it this way in an old blog post:

The returns of small growth stocks are ridiculously low—just 2.18 percent per year since 1927 (versus 17.47 percent for small value, 10.06 percent for large growth, and 13.99 percent for large value). It should be noted that the above returns are for hypothetical portfolios: the returns of real portfolios using the above methodology are lower still, particularly for small stocks, because of little things like commissions, bid/ask spreads, and market impact.

Why anyone would want to add an asset like that to their portfolio is beyond me.  There are certainly many funds out there that are worse bets than the Gabelli Small Cap Growth Fund.  It might even beat an appropriate index fund going forward.  But it isn't a bet I'd make in my portfolio.

The truth, however, is that this physician-investor is asking the wrong question.  He's asking “What do you think of this particular investment” when what he should be asking is “How can I have a very high probability of reaching my investing goal while taking on the least possible amount of risk?”  Taylor Larimore, author of The Bogleheads Guide to Investing likes to point out there are many roads to Dublin.  It isn't impossible to reach your goals using actively managed mutual funds.  There are far bigger investment errors to be made out there.  But why not take the road that (according to the best data we have) is most likely to be the shortest and safest?

How would you reply to this colleague who asked your advice on this fund?

Does your wife have a brokerage option? Also what are the other fees and ERs in her plan? Does she get a match?

Many 403Bs (like my 401K) that offer American Funds offer them WITHOUT the load, so be sure that you’re actually paying it before worrying too much about it.

If you really are paying the load, I’d still invest enough to get the match. If there’s no match, or you’ve already maxed it out, then you’ve got a bit of a decision. As a general rule, it’s still a good idea to contribute to a high expense 401K if you won’t be using it very long, especially if you’re in a high tax bracket. However, if you expect to have your money in the 401K for decades, then at around 2% per year of expense, you’re probably better off using a taxable account instead (investment wise, not asset protection wise since 401Ks are generally protected from creditors, and taxable accounts pretty much never are.)

A load, however, is a little different. If the expenses OTHER THAN THE LOAD aren’t too bad, then you might do okay if you buy and hold that fund for a long time, so the load is then spread out over many years. But if you’re not staying in the 401K or the fund very long, then you really have to wonder.

Let’s say the expense isn’t too bad except the load, and you’re leaving in say 5 years and will put the money into either a cheap 401K or an IRA. You put $10K a year into this thing. Over those 5 years, you’ll pay $2875 in load. Let’s assume you’re at a 38% marginal rate now, and that’ll you’ll be able to withdraw this money later at an effective rate of say 25%. (Long discussion as to why these are probably good assumptions, but trust me.) The amount you are saving on your taxes by using the 401K, long-term, is something like $6500 from the difference in tax rates, plus the benefit of having that money in a tax-protected account, which over 30 years is probably worth something like another $30K (because tax-protected money grows faster than taxable money due to the annual tax drag on dividends and distributed gains).

So yes, I think paying the load could be worth it instead of using a taxable account.

Thanks for giving my question some thought. I double-checked on whether she is paying the load, and the answer is yes. It eventually fades out once she has $1 million invested. The only load-free option is a money market, but that pays 0% and still has an expense ratio. The lowest expense ratio of the funds offered is 0.6. Her employer contributes a set amount, regardless of what my wife contributes (even if she puts in $0).

Separately, I’ve started doing “back door Roths” through vanguard with after tax money for both of us. Aside from the $5k annual limit, I really like using this to supplement our 403b accounts.

Thanks again for the reply. I discovered your website a few months ago and have found it very helpful as a physician investor.

Does she have option of taking a 401k loan? If so potentially could put money in MM initially and then borrow and invest elsewhere although this does carry some risks, e.g. if she loses her job has to repay back or pay penalty.

Overall I am not sure we have enough info to determine the best answer for you and your wife here. Remember that high fees and loads could more than offset the tax benefit now over long run. Answer depends on lots of assumptions of how long your wife will stay, whether plan will improve, your retirement tax rates, etc..

Did you read the WSJ article saying that a lot of Value, Dividend, and Int’l Discovery funds loaded up on the Facebook IPO?
For some of them, the allocation was over 5% of the portfolio…seems like investors are paying Mutual Funds managers to gamble on their behalf.

No, missed that one. But it’s a pretty significant breach given that Facebook isn’t a value, dividend, or international stock.

Comparison is the thief of joy