[Editor's Note: You may recall the Physician on FIRE series on Doctors A-D, each of which spent different amounts of money. Today, we move even further with Dr. E- the biggest spender of all. Can big spenders FIRE too? You betcha. ]

I’ve shared my personal path to FI and we’ve explored a host of scenarios for our hypothetical 4 physicians. Today, I’d like to take a deep dive into the finances of another real physician who we’ll call Dr. E. The name has been changed (it’s not short for Dr. Evil), and the details rounded off, but we’re talking about one of your fellow readers and his actual finances.

The good Dr. E is a hard-working physician, a few years into his post-fellowship career. He earns a handsome salary, but boy, oh boy, does he work hard for the money. In 2016, the independent contractor worked three jobs, took a total of 4 weeks off, and worked most weekends — 30 out of 52 to be exact. There are bills to be paid, you know, and the bills don’t pay themselves. Dr. E pays them to the tune of about $200,000 a year in total output.

Is Dr. E just another Dr. Dahlgren, the spendthrift of our 4 physicians who had no hopes of reaching financial independence? Not exactly.

First, Dr. E earns double. His income from his main job, side job, and moonlighting totaled a bit more than $600,000 last year. That’s double the salary of the 4 Physicians. Second, he has aspirations to become financially independent in a timeframe that most would consider early — by his 55th birthday, if not earlier. Dr. D had no prayer of that happening.

Let’s compare them line by line on the savings calculator.

Although Dr. E’s salary is double, he doesn’t receive a match or profit sharing. Of course, his taxes are substantially higher than Dr. E’s — far more than double, reflecting the progressive nature of income taxes. Also, as an independent contractor, he’s paying both the employer and employee FICA taxes.

With three children, Dr. E is contributing more to his 529 plans. He’s got enough income to max out his tax-deferred space, complete his and hers Backdoor Roth IRAs, and he invests $100,000 a year in a taxable account. It sure is nice to have that income!

Dr. E has studied the numbers in the chart above, and he likes the idea of reaching his goal right around his 55th birthday as long as he can eke out a 4% for better real return.

But he’s not happy. Why not? He worked 30 weekends last year. He worked three jobs. He doesn’t mind working like a resident for a few more years, but Dr. E has recognized that this schedule is unsustainable. His kids are growing up too fast, and he’s going to want to slow down soon.

What if Dr. E Worked Less? 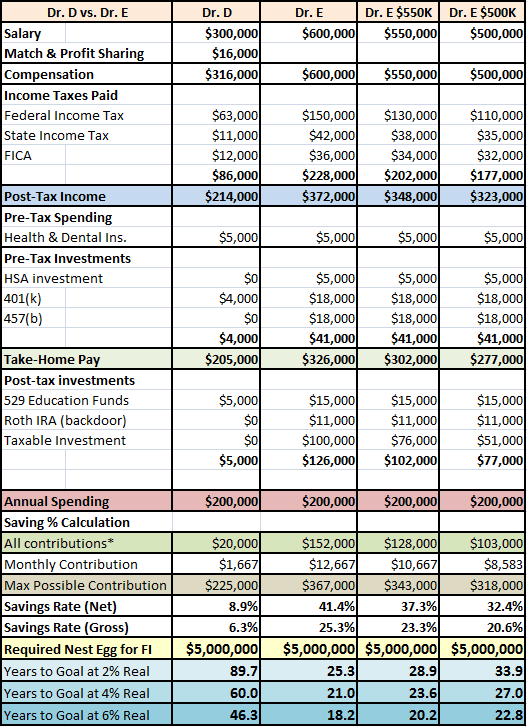 A $50,000 pay cut results in $24,000 less in take-home pay. This is a reality for a high-income professional in a high tax state, with a total marginal tax rate exceeding 50%. He’d be better off financially moving to a no-income-tax state, but we’ll assume that option’s off the table.

Devoting $24,000 less to the taxable brokerage account lowers his savings rate and increases his time to financial independence by two to three years. What else can he do? Well, he could do the obvious. Cut spending like Dr. D did in a previous example of lifestyle deflation. With this income, we don’t need to make drastic changes (Dr. D cut 40% from the budget), but we can see what happens when Dr. E reduces the budget by 10% and 20% rather than cutting his hours.

What if Dr. E Spent Less? 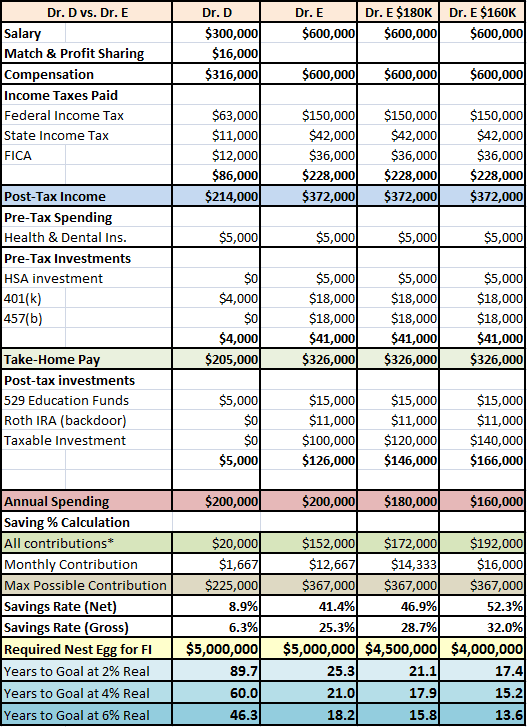 Now, we benefit from the synergy of not only putting away more money each year, but also having a lower target for financial independence. To maintain the new lifestyle requires less money.

But… this assumes Dr. E continues to earn $600,000 a year. While there may be some pay increases to offset the reduced hours he’d like to implement, he can’t count on that. How would the numbers pan out if we combined lower spending with a decreased salary?

What if Dr. E Reduced Both Spending and Salary?

Now, we’ll get the synergy of a lower target, still rather high salary, and the lifestyle benefit of working less. Forget synergy. Trinergy? 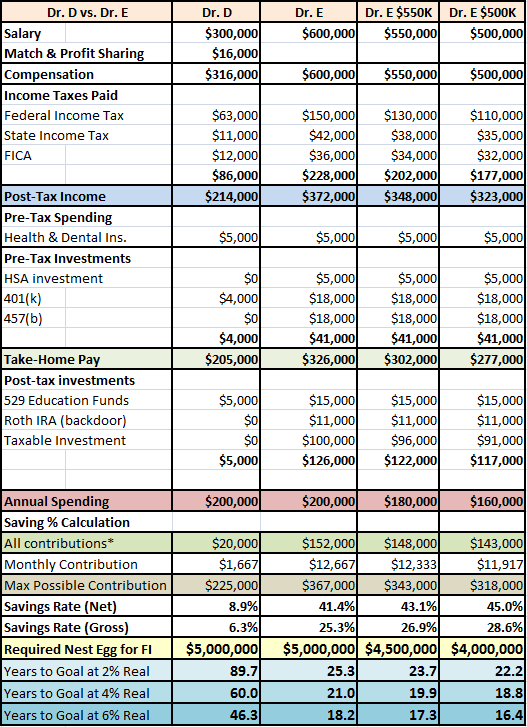 In this variation, we see that the reduction in spending has a greater effect than the reduction in salary. This is not so surprising. Dr. E has to earn a little more than two dollars to have an extra dollar to spend. Every $10,000 he and his family doesn’t spend is more than $20,000 he doesn’t have to earn.

His odds of being financially independent at 55 are indeed better when his salary is reduced by $100,000 with a concomitant $20,000 reduction in annual spending. Isn’t that remarkable? Paris- the most visited city in the world, and for good reason.

Caveats to the Equation

To compare apples to apples, in this exercise, we simply assume that current annual spending equals future annual spending. In reality, Dr. E can likely expect the annual output to go drop significantly sometime around the targeted FI date.

Eventually, his kids will be independent. Not financially independent, but no longer completely dependent on mom and pop. Work-related expenses will disappear. The mortgage will be paid off — Dr. E currently puts $54,000 a year towards his. Term life and disability insurance will no longer be necessary.

It’s safest to plan as though at least some of these things won’t happen; after all, certain expenses will be swapped for increased travel and expenses related to newfound free time, but it’s also smart to recognize that some of the budget line items have a shelf life.

It’s tough to argue with that outcome.

What would you do if you were Dr. E? Find a way to spend less? Work less? Both? Would you look for a way to earn even more? Give Dr. E your advice in the comments below.

I made a similar determination to work less to be sure we could get the new pass through at $315. Also 57 and late to the game and hoping to retire at 69. Working hard. We can’t realize our goals without some investments doing better than currently. But we are putting in max 401 and HSA at $62k and$8k this year. $28k Mortgage will be paid in 12 years. 501’s for grandkids, helping 2 kids now on grad school. Spending around $140k, tithing &30k and hoping to start saving in a taxable account, as a large chunk of cash is sitting in a mm at 1.7%.

I hate it when the tax code causes people to work less than they would otherwise like to.

Data point: My high deductible plan for my family of four is ~$2500/yr. Dental ~$750/yr. Live in the mid south, work for a large non-profit hospital system. Thankful the high deductible plan with HSA works for us right now since we’re currently without significant medical issues (ages 36, 31, 7, 1)

That’s very cheap. I pay that much in two months. Surely somebody is subsidizing that.

Certainly my plan is subsidized by the organization. I’m thankful for it. I paid for our “Cadillac plan” last yr (wife was pregnant) which only had a $500 deductible. Cost was ~$6500/yr.

The thing that is not being taken into account is that this example assumes a 1099 (independent contractor). A 1099 pays the full cost. So for the purposes of this example, it’s not being considered.

It’s unrealistic to assume as an individual ages that a high-deductible plan is feasible. Unless of course you rarely used it over the years and the investments have gone up substantially.

That being said, the only thing I see missing would be a SEP-IRA. Instead of explaining it here, I would recommend Googling SEP IRA independent contractor.

Don’t know how long a HDHP will work for us. Hopefully for at least another 10 yrs to bank some money into the HSA. Doesn’t seem feasible long term.

Data point. Your health insurance didn’t cost 2500/yr for a family of 4, that was simply the (likely small) part of the premium you paid. Your employer probably paid 10-12k or more. So even you HDHP cost 12-15k.

What makes you think I’m underestimating the value of my low cost insurance? I very much aware how inexpensive my insurance is and that my employer pays a large chunk. I was just sharing a data point with the community here on this topic. As another example of what’s relevant to my scenario and would be included in the budget scenarios in this article – if I lived just one state south of where I’m at, I’d pay $45,000 less in state income tax. I’d gladly trade that for and extra $15K in health insurance cost. We just all have different factors the include into our equations. Wasn’t trying to one up anybody.

Thanks for the insightful post. Great thought piece for me, since I find myself in a similar position as Dr. E. Good money, but my employed job is a 60+ hr/wk job and I’ve been trying to figure out how to cut back so I can spend more time with the family. Really happy with the work setup outside of the hours and call (interventional cardiology).

Nice post! Underscores the importance of geographic arbitrage with regards to containing costs and taxes. Interestingly, in medicine, one usually benefits from better compensation in areas where the cost of living is lower. Makes the pursuit of FI more reasonable.

Like Dr E, I’m hoping to maintain my lifestyle in a high cost of living area. Similarly, our annual expenses are > $200k.

We’ve pared down our expenses as much as we are willing to for the time being, so instead are planning to capitalize on dual incomes with double the opportunity for pretax retirement investment. It’ll take a lot of saving on top of that to reach our goal of retirement in 15 years, but we’re committed.

I empathize with the quandary or wanting to cut back on working hours, but realizing that the lower income will extend the time to (mo)FIRE. It’s a tough choice.

I’m not making quite as much as the Dr E in the post.

I have a similar situation. FT job plus a lot of moonlighting.

I am doing what the hypothetical Dr E example states:
Max out all tax deferred accounts (401A, with 5% match, 457, HSA, and SEP on the moonlighting), and reduce expenses.

We spend a lot at present with two in private school, one in college, and we already bought the retirement home.

My plan includes making a lot less money. I know WCI does not like the tax code disincentive to exceed the pass through deduction income limit but that’s where I sit now.

I lost $40,000 when the moonlighting hospital hired a third contractor (dropped me off 6 weekends and some call monies) and I didn’t care due to the high marginal tax rates + SE taxes. I won’t be replacing that work.

As I’ve said before, if it’s “trade life for money” income, I’m glad to eventually make less. I do hope to increase “passive income” by building a cabin on one of the lots I bought on either side of our retirement home.