Don’t Rely On Predicting The Future

I checked out a couple of books from the library yesterday and in the opening pages of each I found some powerful quotes that reinforced a very important investment lesson I’ve mentioned many times before on this blog:

You need an investing plan that doesn’t require you to predict the future!

The first book is called DealMaker – A Real Estate Mogul’s Blueprint for Success by Jerry Wallace, who made millions developing beachfront condos in Florida. It was published in 2007, at about the peak of the real estate bubble.  Here’s  the quote:

The most common question I encounter from potential customers or investors in my projects is “When will prices stop going up?”  Condominium prices have been rising steadily for the last decade at least, and investors want to know where the ceiling in this market is.

I focus a great deal of my time on the Florida real estate market.  In my opinion, peak prices for condos in Florida won’t be reached until we catch up with the rest of the world.  In other words, if you go to the Cayman Islands, Hilton Head Island, Vail, and so on, and check the prices per square foot in those and similar resorts, you’ll find that the Gulf Coat and other areas in Florida are only at one-third to one-half their prices.  With beaches that rival any others in North America, I see no reason for prices in Florida to stop rising.

I don’t think the upward climb will stop until underpriced areas reach a competitive price level, and even then I expect it all to continue to rise together.  So we may never reach that peak.  Think about it for a moment: There is a finite amount of real estate on the Gulf shores.  There are 76 million Baby Boomers in this country.  One is turning 55 every seven seconds for the next 10 years, many of whom have saved up all their lives with the dream of buying a waterfront property where they can retire.  If 25 percent of them buy resort property, that represents a demand for 19 million units.

Simply put, I can think of no logical reason for the value of these properties to go down.

Wow.  Just wow.  The logic seems solid, right?  Except it was totally wrong.

Back in 2012, when I originally wrote this article, I browsed real estate listings for beachfront condos on Zillow in the Fort Walton Beach area. I found a condo that was typical for the area and checked out its historical sales price and Zestimate. In 2007, at the peak of the bubble when “Deal Maker” was written, the condo I picked had a Zestimate of $188K. In 2008 it sold for $90K (with a Zestimate of $85K) and then in 2012, it sold for $25k (with Zestimate of $59K).  It wasn’t an isolated case, of course. I looked at the entire zip code (mostly oceanfront condos), and the average price dropped from $221K to $130K, over 41%.

The second book is called The Gone Fishin’ Portfolio, by Alexander Green.  Like this website, he advocates investing in a reasonable, fixed asset allocation of low-cost index funds.  He says this:

5. It doesn’t require you–or any investment “expert”–to forecast the economy, predict the market, or analyze competing economic theories about the future.

Later in the book, he writes:

…eager to trust someone with their savings, too many investors look for a broker, a money manager, a newsletter editor, or television pundit who can tell them what the future holds.

Consciously or unconsciously, they imagine the investment process works something like this: “First you make an educated guess about what the economy is likely to do.  Based on this, you have a hunch about where the market is likely to go.  And based on that, you have a theory about what sorts of investments you should be buying.” 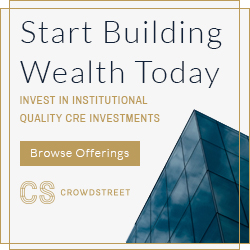 It is an interesting exercise to go to the library (or better yet used book store) and get the older investing books.  5, 10, 15, even 20 years old.  Some of the advice and conjecture about the future is utterly laughable. It is so much easier to tell the get-rich-quick books apart from those offering sensible investing advice.  The good books are still just as relevant today as a decade ago.

I often have casual investing conversations with partners and other physicians.  I am amazed at how often the conversation turns to predicting the future.  People seem to think this is a requirement for investing success.  It isn’t.  What is essential is a plan that is highly likely to succeed no matter what happens in the future.  That involves saving 20% of your income for retirement from the beginning of your career, investing it into a reasonable asset allocation, and minimizing your investment and tax costs.  You can guess which of the two books I’ll be finishing.  There’ll be a review when I’m done.